NEW DELHI: India needs to create more opportunities and focus on improving living conditions and education so that fewer numbers of people move abroad, say local experts.A large number of Indians are giving up their citizenship, according to data presented by the government in parliament recently.It showed that 160,000 Indians renounced their citizenship in 2021,…

NEW DELHI: India needs to create more opportunities and focus on improving living conditions and education so that fewer numbers of people move abroad, say local experts.A large number of Indians are giving up their citizenship, according to data presented by the government in parliament recently.It showed that 160,000 Indians renounced their citizenship in 2021, the highest number in the past five years.The data pointed out that over 78,000 Indians acquired US citizenship by giving up their Indian citizenship.India doesn’t allow dual citizenship, and if anyone has to acquire citizenship from a different country, the person must surrender their Indian citizenship.Speaking to Anadolu Agency, Abhik Ghosh, a professor in the Department of Anthropology at Panjab University, located in the Indian city of Chandigarh, said the country has been witnessing a brain drain for a long time now and the citizens choose countries for different reasons.Read more: Indian atrocities in IIOJK denounced “People are moving abroad for better opportunities as they perceive it or for any number of choices they may get by going to that particular country,” he said, adding that people are moving to different countries and not a single country.”It is a matter of how many choices there are and how many choices one feels there may be in different countries,” he said.

“I think people are moving outside because they feel they are getting better options outside.There are, however, many who work for a few years and come back.” Improve facilities Stating that while the migration cannot be stopped, Ghosh said there is a need to improve several facilities in order to prevent people from choosing options abroad.”You cannot stop it (migration) entirely.But what you can do is to prove conditions, improve the education system, improve employability, and improve the living conditions for workers,” he said.

“So that people feel that they are getting a better deal, other than to move anywhere else.” Indian Junior Home Minister Nityanand Rai told parliament on July 19 that “individuals renounced Indian citizenship for reasons personal to them.” Indian author Dilip Mandal, a former journalist, told Anadolu Agency that it is not a push migration and those who are leaving are not making this choice because they are persecuted or there is famine or civil war in their own country.Also read: Photo exhibition highlights Indian atrocities “Barring some exceptions, the people who are leaving are highly educated, privileged, powerful, and rich,” he said.

He also said that there are some “obvious explanations” for the “rich and endowed Indians,” who benefited the most from the democracy in India and then are giving up their citizenship.”The pursuit of economic gains can be a big reason.Also, the quality of life is also better in the West and pollution also could be a factor,” he said, adding another possible reason is that in countries like the United Arab Emirates and Singapore, the tax rates of individuals are lower.Mandal said that migration is happening every year in India, but it is discriminatory when it comes to India, because of the social structure in India.”These are social classes which claim to be very patriotic, but when they get the first opportunity, they leave the country,” he said.Rich leaving A research report by Henley and Partners, a UK-based global citizenship and residence advisory firm, said that about 8,000 high-net-worth individuals (HNWI) are expected to leave India this year.Andrew Amoils, head of research at New World Wealth, a South Africa-based global wealth intelligence firm, told Anadolu Agency that while he was not sure of the exact reason for leaving, he said normally HNWI outflows are related to finding better business opportunities abroad.

“Also safety concerns, taxation, and standard of living are major drivers.HNWIs leaving India are mainly going to the UAE, US, UK, Australia, and Singapore,” he said by email.He said in his view, these outflows are not “particularly concerning: as India is still producing far more new HNWIs than it is losing to migration.” Amoils said there is a trend of HNWIs returning to India, and once the standard of living in the country improves, “we expect more and more wealthy people to move back.” “New World Wealth’s general wealth projections for India are also very strong – we expect HNWI numbers in the country to rise by 80% over the next decade, making it one of the world’s fastest growing wealth markets during this period,” he said.

COMMENTS Comments are moderated and generally will be posted if they are on-topic and not abusive.For more information, please see our Comments FAQ.

Mon Aug 8 , 2022
CINCINNATI – A shooting rampage outside a popular nightspot near downtown Sunday left nine people wounded, prompting a desperate search for at least two shooters and fueling concern that gun violence could become a "normal part of our culture." Chaos erupted after an altercation between two groups of people shortly before the 2 a.m.closing time… 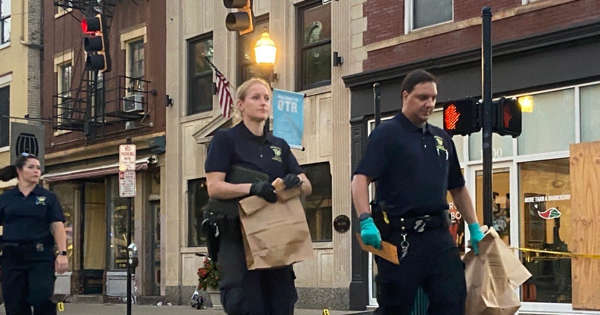