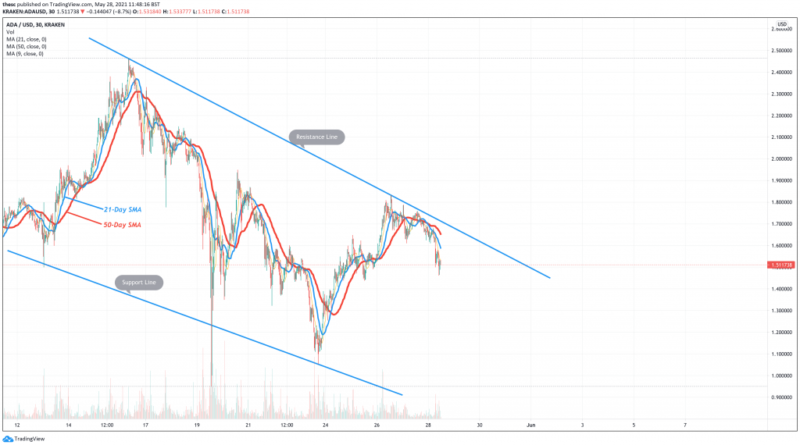 5 Best Cryptocurrencies to Buy May 2021 Week 4
Author:
Here are the 5 best cryptocurrencies to buy right now.As the Tesla-instigated bear market continues, we’ve gone for a green theme with five coins that don’t use a proof-of-work consensus mechanism.While they haven’t been able to avoid today’s market-wide selloff , they may be better positioned to thrive in a more eco-minded future.5 Best Cryptocurrencies to Buy Cardano (ADA)
Cardano has weathered the bearish market better than most other cryptocurrencies up until now.It’s still up by around 15% over the past 30 days, whereas bitcoin and ethereum are down by 34% and 5.6%, respectively.However, it has begun to slide down with the rest of the market.

Its price has fallen by 13% over the past 24 hours, although it has shown signs of a modest recovery in recent hours.It currently stands at $1.51, having been as high as $1.81 only a couple of days ago.
ADA’s resistance level has sunk from $2.45 on May 16 to just over $1.70 today.Its support level is just under $1.00, having been $1.50 a couple of weeks ago.Recent trends indicate an ongoing decline, although some commentators are continuing to talk up its chances of bouncing back strongly.YouTuber Lark Davis recently posted a video in which he claimed that Cardano is “ready to explode.”
I think that we could be in for a bit of a Cardano summer, so to speak, with loads of new applications launching in anticipation of the smart-contract launch on Cardano.
Cardano has yet to experience adoption on the scale of an Ethereum.That said, the impending launch of smart contracts on its platform could set it up to be a serious Ethereum rival.

As a proof-of-stake platform, it avoids the criticisms currently affecting Bitcoin (and also Ethereum).ADA has also gained in price as Ethereum gas fees have hit record highs , potentially paving the way for future growth as Cardano becomes a fully functional alternative to Ethereum.If it does begin to truly rival Ethereum, it will certainly cement its position as one of the best cryptocurrencies to buy.Buy Cardano (ADA) Now Stellar (XLM)
Stellar (XLM) is down by 13% over the past 24 hours, much like ADA.Its longer term decline is a little steeper than ADA’s, however.It has fallen by 25% in the past 30 days, although is still up by well over 400% across the previous 12 months.
XLM’s resistance level has dropped from $0.80 on May 16 to about $0.45 today, a fall of 43.75%.

Its support level now sits at under $0.25, whereas it was as high as $0.625 on May 11.
Still, even with these declines, Stellar is one of the best cryptocurrencies to buy at the moment.It’s another proof-of-stake cryptocurrency that’s well-positioned to grow under more favorable market conditions.

The Stellar Development Foundation recently invested $15 million in AirTM , a Mexico-based digital wallet and peer-to-peer exchange platform.As part of the deal, the Stellar blockchain will be integrated with AirTM’s trading platform, providing it with an opportunity for wider use.
Stellar has also been enjoying more investment interest.At the end of April, Switzerland-based investment product provider 21Shares announced it was launching an exchange-traded product (ETP) for XLM .This comes in addition to a similar ETP for ADA.

Buy Stellar (XLM) Now Ripple (XRP)
XRP is down by 14% over the past 24 hours.It’s also down by 25% over the past week and 37.5% over the past 30 days.Even so, it’s more than 300% up across the past year.
XRP’s resistance is currently sitting at around $1.00, and had been closer to $1.70 only ten days ago.Its support level is now close to $0.60, a mere 31.25% of the price — $1.92 — it reached on April 14.
XRP isn’t actually a proof-of-stake cryptocurrency, but its consensus mechanism does avoid using proof-of-work.As such, it’s highly energy efficient in comparison to Bitcoin, and may stand to profit as a result.On the other hand, it has an ongoing case with the Securities and Exchange Commission.Recent hearings have been favorable to Ripple though , so XRP may end up rising significantly in price if and when the company wins a positive final outcome.Buy Ripple (XRP) Now Tron (TRX)
As with pretty much every other cryptocurrency, Tron (TRX) has fallen steeply over the past day.

It continues to be a popular platform for gambling apps , while it is also increasingly moving into non-fungible tokens .The Tron Foundation announced in April that it had reached $13.6 billion in total value locked into its DeFi system.🎊Total Value Locked(TVL) in #TRON #DeFi Equals $13.6 Billion.
🤗All the projects are welcome to join #TRONCenturyMining ..