“#An Ethereum blockchain upgrade, crypto regulatory battles, and Bitcoin price discussion: Hodler’s Digest, Aug.1-7” Coming every Saturday, Hodlers Digest will help you track every single important news story that happened this week.The best (and worst) quotes, adoption and regulation highlights, leading coins, predictions and much more a week on Cointelegraph in one link.

Square to acquire Australian fintech Afterpay in $29B deal

Jack Dorseys digital payments firm Square entered into a $29 billion stock deal to purchase Australian buy now, pay later (BNPL) firm Afterpay this week.Just like the name Afterpay implies, Square will essentially be buying the firm now and paying later, with the transaction set for the first quarter of 2022 and to be paid out entirely in Square common stock.Bitcoin (BTC) proponent Anthony Pompliano was pleased with the news, noting on his web series The Best Business Show that Square is one of the only stocks he owns, as he forecasted that the firms valuation will explode following the acquisition.In an Aug.3 YouTube video, Pomp went for sheer and utter clickbait with the title SQUARE is going to be worth 1 TRILLION dollars, and he emphasized the potential of rolling out Afterpays BNPL services to 70 million Cash App users and 2 million Square merchants.Ethereum London hard fork goes live The London hard fork arrived almost on schedule on Aug.

5, ushering in Ethereum Improvement Proposal 1559.An interesting feature of the upgrade is that it also ushered in some bullish sentiments from Ethereum (ETH) proponents and some sour grapes from Bitcoin maxis.Ethereum has now transitioned away from a bidding-based fee market to a fixed price-and-burn mechanism, which may see the asset become deflationary if more ETH is burned than issued in block rewards.However, this may be more likely after the switch to proof-of-stake with ETH 2.0.If the asset does become deflationary, it would reach the status of ultrasound money, which is a term that has also been a long-running meme in ETH communities that mocks Bitcoiners description of BTC as sound money due its capped supply of 21 million.

However, the amendments vague wording and lack of clearly defined terms suggest that crypto developers and proof-of-stake validators would still be subject to expanded reporting and taxation that some have described as unworkable.For some reason, members of the White House seem intent on cracking down on tax evasion in crypto without understanding the nuances of the industry.They also seem to overlook the blatant rorting of the system from multinational giants who essentially vacuum capital out of the people’s pockets while paying zero tax.Mike Novogratz blasts US officials for poor grasp of crypto industry Amid the backdrop of looming crypto regulations that will most likely increase taxes and decrease profits, Galaxy Digital CEO Mike Novogratz has come out swinging in response to Senator Elizabeth Warrens remarks calling cryptocurrency the wild west of the U.S.financial system.

The billionaire crypto proponents jabs were, of course, delivered through social media, with Novogratz taking to Twitter on Aug.3 to assert that most U.S.officials have no idea what they are talking about when it comes to crypto: Crypto is the future of our financial system and our citizens deserve officials that do their homework to understand this new technology.Most of our leaders havent done that yet.

We also need regulators and politicians who understand that new ideas need room to grow.Circle and Unstoppable Domains to introduce username-based USDC payments Circle and Unstoppable Domains are working to introduce username-based addresses as an alternative to long-winded alphanumeric crypto wallet addresses to aid the not-so-tech-savvy, a.k.a.newbies and boomers.According to an Aug.

Under this arrangement, USDC transfers will become akin to sending an email, likely mitigating the problem of transferring coins to the wrong address, losing funds forever and living with regrets over one’s lack of due diligence.Winners and Losers At the end of the week, Bitcoin is at $42,651, Ether at $2,867 and XRP at $0.74.The total market cap is at $1.73 trillion, according to CoinMarketCap.Among the biggest 100 cryptocurrencies, the top three altcoin gainers of the week are Voyager Token (VGX) at 94.22%, THORChain (RUNE) at 50.69%, and Ravencoin (RVN) at 44.13%.The top three altcoin losers of the week are Amp (AMP) at -14.97%, XinFin Network (XDC) at -4.74%, and Telcoin (TEL) at -1.66%.For more info on crypto prices, make sure to read Cointelegraphs market analysis.

Most Memorable Quotations “We can see Bitcoin on the balance sheets of cities, states, governments, companies, small [and] big investors.” Michael Saylor, MicroStrategy CEO Were now moving into a world where we have these nonfungible software objects that have unique identities that can actually accept money, pay money and can participate in governance, either in decentralized autonomous organizations or potentially other kinds of governments that can govern themselves.Joe Lubin, ConsenSys founder and CEO Im spending five hours a day on everything from regulation to licensing and everything in between.Sam Bankman-Fried, FTX CEO Primarily, crypto assets provide digital, scarce vehicles for speculative investment.Thus, in that sense, one can say they are highly speculative stores of value.

Gary Gensler, chair of the U.S.Securities and Exchange Commission Crypto is a bit like the parable of the blind men and the elephant.People touch it from different sides.They get distracted and carried away and energized about these different topics.Marc Andreessen, Andreessen Horowitz general partner and co-founder If you put a gun to my head, and you said, I can only have one.I would choose gold.Ray Dalio, billionaire hedge fund manager Just so were all clear here, the SEC has no authority over pure commodities or their trading venues, whether those commodities are wheat, gold, oil.or #crypto assets.Brian Quintenz, U.S.

Matthew Gould, Unstoppable Domains CEO Prediction of the Week Bitcoin chart fractal suggests BTC price will have rallied to at least $80K by September If this latest bullish BTC prediction turns out to be true, Bitcoiners may soon be able to start driving their lambos on the moon.Nunya Bizniz, an independent market analyst, posted a bullish prediction on Aug.1, as they highlighted that the recent rally of around 40% in late July included 10 consecutive days of lovely green candles, and not those horrible red ones that bears love so much.The analyst noted that each of BTCs previous 10-day bull runs has ended up with at least a 100% price increase within 30 to 60 days.Therefore, if history repeats itself, Bitcoins price may double and surge to new all-time highs around the $80,000 mark.FUD of the Week South Korean regulator to reportedly shut down 11 crypto exchanges Crypto regulations in South Korea may become more stringent after news circulated this week that South Koreas top financial regulator, the Financial Services Commission, or FSC, is reportedly planning to shut down a dozen local cryptocurrency exchanges amid accusations of fraud.The FSC will suspend operations of at least 11 mid-sized crypto exchanges in South Korea due to alleged illegal activities and fraudulent collective accounts, according to local media outlets.

The publication cited anonymous industry sources claiming that the names of the exchanges were not yet disclosed, so Koreans will not know exactly what to FUD over until the names come to light.The sources argued that the mentioned crypto exchanges will be unable to get approval for operation by the FSC.The report also notes that the authority is planning to implement stricter regulations for smaller crypto exchanges in South Korea, meaning that anyone firm that wants to partake in illegal behavior will have to do it on a large scale.Moneros former maintainer arrested in the US for allegations unrelated to cryptocurrency Speaking of alleged illicit behavior, Riccardo Spagni, the former maintainer of the Monero (XMR) cryptocurrency, was arrested last month in Nashville, Tennessee, but not for anything related to crypto.Spagni is facing fraud charges tied to alleged offenses in South Africa between 2009 and 2011, during his time serving as an information technology manager at a company dubbed Cape Cookies.Spagni allegedly fabricated additional invoices from a supplier of Cape Cookies, which included inflated prices for goods and services, along with his bank details instead of the suppliers.He now faces a hearing on Aug.5 to determine whether he is held, pending trial.

If convicted in South Africa, he faces 20 years in prison.Breaking: BSV reportedly suffers massive 51% attack Bitcoin SV reportedly suffered a massive 51% attack on Aug.3 that resulted in up to three versions of the chain being mined simultaneously.Speaking about the attack, Lucas Nuzzi, a network data product manager at Coin Metrics, stated on Twitter that someone is seriously trying to destroy BSV, and added that: For over 3 hours, attackers were able to take over the chain.

All exchanges that received BSV deposits during that time might have been double spent.Best Cointelegraph Features BlockFi faces regulatory heat, a sign of possible crypto lending regulations? The crypto lending giant BlockFi is facing regulatory scrutiny from a handful of states in America ahead of a proposed public listing.Civic engagement and crypto: Miami unveils its own digital coin MiamiCoin is not just a cryptocurrency, but rather a decentralized application that can function as a developer platform for cities.Ready to deploy? Amazon’s Bitcoin acceptance can prime a payments future Amazon denied reports it will accept BTC payments soon, but seemingly, its only a matter of time before the tech giants embrace the token economy.

If you liked the article, do not forget to share it with your friends.Follow us on [Google News] too, click on the star and choose us from your favorites.For forums sites go to [Forum.BuradaBiliyorum.Com] If you want to read more News articles, you can visit our [General category.].

Mon Sep 6 , 2021
Coming every Saturday, Hodler’s Digest will help you track every single important news story that happened this week.The best (and worst) quotes, adoption and regulation highlights, leading coins, predictions and much more — a week on Cointelegraph in one link.Top Stories This Week [Square to acquire Australian fintech Afterpay in $29B deal] Jack Dorsey’s digital… 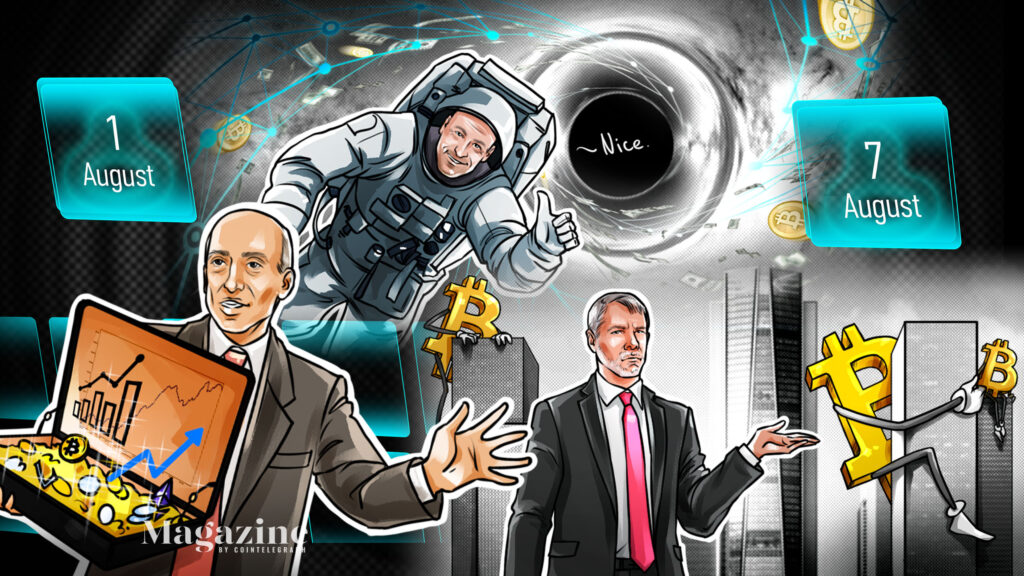