© Alexander Zemlianichenko/AP Riot police in Moscow detain a demonstrator during a protest of the partial military mobilization ordered Wednesday by President Vladimir Putin.Within hours of President Vladimir Putin’s speech declaring a partial military mobilization on Wednesday, men all over Russia — including some who had tried for months to ignore the messy war in… 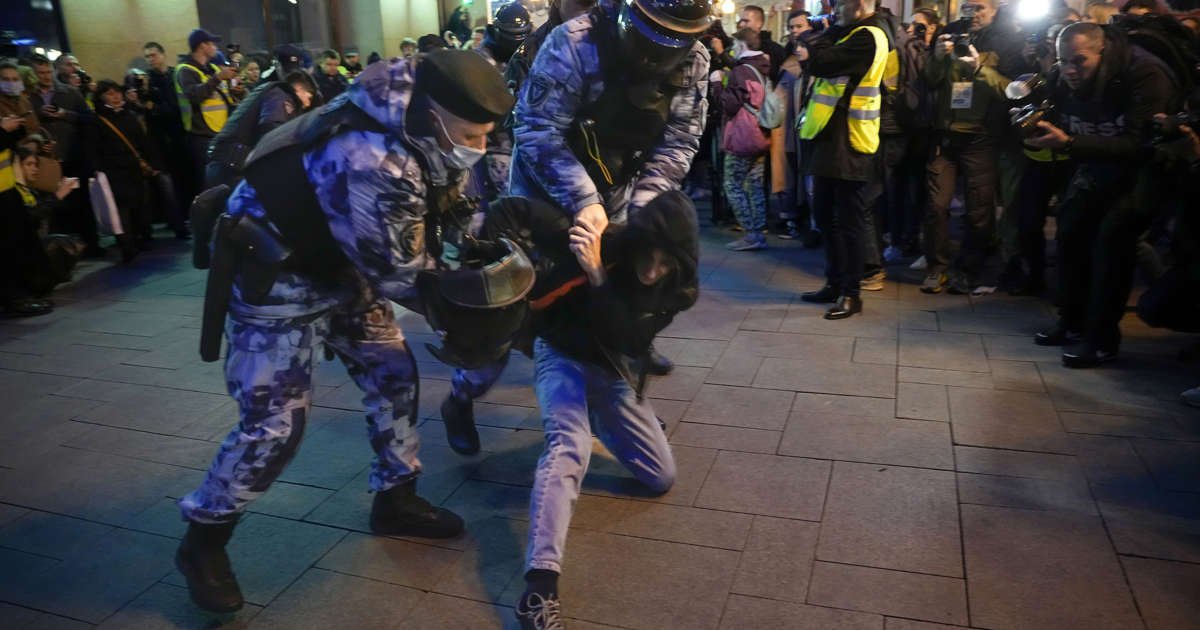 © Alexander Zemlianichenko/AP Riot police in Moscow detain a demonstrator during a protest of the partial military mobilization ordered Wednesday by President Vladimir Putin.Within hours of President Vladimir Putin’s speech declaring a partial military mobilization on Wednesday, men all over Russia — including some who had tried for months to ignore the messy war in Ukraine — suddenly found their lives thrown in chaos as they were summoned to duty.

The men, mostly reservists under 35 who served in the army and have junior military ranks, were handed written notices in their offices or at their homes.In some cases, they had their identity documents checked on the street and were told to appear for a health check.Others got orders by telephone.

Anxious relatives, meanwhile, began searching for ways to flee the country or otherwise avoid their loved ones being called for service.Flights to the few cities abroad still offering direct service to Russia — most destinations have been cut off by sanctions — were suddenly sold out.

Google search trends showed a spike in queries like “how to leave Russia” and even “how to break an arm at home,” raising speculation some Russians were thinking of resorting to self-harm to avoid the war.

“They’ve been chasing me since February, trying to offer me a contract,” one Moscow resident, who served in the army and has prior combat experience, said in an interview.

The man, who spoke on the condition of anonymity to speak freely, said that unlike others who had received written summonses, he had received a personal call from the military enlistment office, which has had his number on hand for months.“I was ordered to undergo a [health] commission tomorrow morning,” he told The Washington Post.

Military analysts said it was far from certain that the partial mobilization would be able to turn the flagging military campaign to Russia’s advantage quickly, if at all.

But by Wednesday night, it was clear that the political backlash Putin feared — and that led him to resist a mobilization for months despite repeated battlefield setbacks — had begun.

In response to Putin’s decree, criticism of the war, which had been rising internationally and at home despite a severe Kremlin crackdown on dissent, suddenly burst into the open.

Relatively contained but significant protests erupted not only in the big cities of Moscow and St.Petersburg, but also in Novosibirsk in remote Siberia.By Wednesday evening, more than 1,000 people had been arrested across the country, according to OVD-Info, an independent group monitoring protest activity in Russia — a remarkable number given that criticism of the war is potentially punishable by long prison sentences.

© Rostislav Netisov/AFP/Getty Images Police officers deployed in central Novosibirsk, in remote Siberia, on Wednesday as protests broke out against President Vladimir Putin’s plan to call up 300,000 reservists for the war in Ukraine.

In the capital, hundreds chanted “Let our children live!” and “Send Putin to the trenches!” as they walked along Arbat Street.Videos on social media showed police officers arresting demonstrators and loading them onto police vans and buses, including a man showing “No to war!”

Petersburg, police officers were seen beating protesters with batons and harshly breaking up crowds.At the small protest in Novosibirsk, a man was detained as he shouted at police officers, “I don’t want to die for Putin and you!”

Putin drafts up to 300,000 reservists, backs annexation amid war losses Putin’s decision to order the partial mobilization, in an effort to call up as many as 300,000 reservists, reflected his diminishing options in trying to reverse some awful defeats on the battlefield, including a lightning Ukrainian offensive that forced Russian troops to retreat from the northeast Kharkiv region.

In a nationwide address on Wednesday morning, he unfurled his latest tangled web of anti-Russian conspiracy theories about Nazis and NATO, and declared his support for staged referendums in the Ukrainian regions of Donetsk, Luhansk, Kherson and Zaporizhzhia, which many Western leaders have denounced as sham votes and an illegitimate pretense for annexing Ukraine’s sovereign territory.

While Putin stopped short of declaring a full mobilization, which would entail a national draft, the partial mobilization immediately began upending the lives of reservists.

In Murmansk in Russia’s Arctic north, an employee of Nornickel, a nickel plant, who fought in the Chechen war over a decade ago received a notice ordering him to show up at a local military commissariat.

Employees of Surgutneftegas, a Russian oil and gas company in Western Siberia, began receiving lists of people obliged to show up for a two-week “training session,” according to a relative of one of the employees and a letter leaked to a Russian Telegram channel Ostorozhno Novosti.

Some eligible men in Moscow told The Post they had received notices obliging them to show up for similar 15-day military training beginning as soon as Monday.

New casualty numbers reported Wednesday by Defense Minister Sergei Shoigu, showing that 5,937 Russians have died in Ukraine — a number that Western governments say is artificially low — did not do much to bolster popular support for the mobilization, nor did Shoigu’s assertions, made without evidence, of far higher death tolls on the Ukrainian side.

The letters left behind by demoralized Russian soldiers as they fled While Putin insisted in his speech that Russia was successfully clearing Nazis from eastern Ukraine and claimed widespread public support among residents in the Ukraine regions he hopes to annex (but still does not fully control militarily or politically), calls for protest were spreading on Russian social media.

Mobilization “means that thousands of Russian men — our fathers, brothers and husbands — will be thrown into the meat grinder of war.What will they die for? For Putin’s palace?” the Vesna protest movement said in a public call for demonstrations.

“The authorities at first said that only ‘professionals’ are fighting and that they would win.

It turned out that they were not winning,” the group added.“So the war is no longer somewhere out there; it has come to our homes.”

While the demonstrations Wednesday could not compare to the tens of thousands of people that marched across Russian town squares against Putin’s reelection a decade ago, they were the biggest display of public discontent since the start of the full-scale invasion of Ukraine on Feb.24.

For many Russians, Putin’s speech Wednesday created an awful sense of deja vu.Beginning that first day of the invasion in February, rumors of imminent mobilization prompted a mass exodus of people fleeing to neighboring Armenia and Georgia or hopping on the last flights to Turkey, Dubai or Tel Aviv.

As their fears rematerialized, Russians in major cities fled to the borders once again, buying up all remaining flights to the few visa-free destinations still available to Russian passport holders.

Short of soldiers to send to war, Russia’s mercenaries recruit in prisons Some of those who missed out on tickets flocked to land borders with Finland and Mongolia, forming long traffic jams at the checkpoints, according to footage posted online.

Online chatrooms sprung up offering live updates from the border crossings with people reporting whether guards had let them through.

“I have been expecting this since the end of February; I was trying to calm myself down hoping that this operation would be over, and I kept postponing this decision,” Anna, a Moscow resident and mother of two sons, one of whom is 24 years old, told The Post, adding that she decided to send her children to Armenia this week.

“I don’t want my son to go to war, this is unacceptable,” said Anna.

“What are the goals of this operation? Why do our children have to sacrifice their lives? We never wanted this war.”

Another Moscow resident, an IT worker whose age makes him eligible for military service but hasn’t been summoned yet, said he was speeding up his family’s emigration and hopes to leave in early October.

“Of course, there is some panic,” he said.“I am worried that it will get worse, although I don’t know how it can be worse, and that it may be too late to leave.” He added, “But we have some unfinished business here, and the only tickets I could find were already over $16,000, which I can’t afford.”

One Moscow millionaire who lives partly in Italy but had returned to Russia for a few days described growing disenchantment with Putin and fear for the future among business executives.The millionaire said he was afraid that he could be stranded in Moscow, even though he is not in the military reserve.

“There are no tickets, and it is getting more and more difficult to leave by road,” he said.“If there are additional restrictions due to the partial mobilization, it might not be possible to leave.”

The millionaire, who like others interviewed for this report spoke on the condition of anonymity because of fear of reprisal, said many in the business elite and intelligentsia saw the war as “a stupid mistake,” with few convinced by Putin’s argument that he is defending Russian speakers in eastern Ukraine.

“The trust of business, of the cultural and academic elite in the regime, has disappeared.

Everyone understands that all the words about the defense of the Russian-speaking population [in Ukraine] and the fight for our brothers bear no relation to reality,” he said.“Everyone sees this as a stupid mistake.”

© Alexander Zemlianichenko/AP A woman reacts as police detained demonstrators during a protest of the military mobilization in Moscow on Wednesday.Russian lawyers reported a flurry of calls from worried men, their mothers, and wives asking for legal strategies to avoid being called up.

Legislation hastily passed Tuesday by the State Duma, the lower house of parliament, sets harsh new punishments for those who attempt to evade the service, surrender or refuse to fight.

On Wednesday, a dark comic strip made rounds on Russian social media, describing the life trajectory of an ordinary Russian in 2022: you go to war or go to jail but then get sent to the front line anyway, given that prisons recently became a new recruitment base to help address the acute shortage of Russian forces.

Isabelle Khurshudyan in Kyiv, Ukraine, Catherine Belton in London, and Robyn Dixon and Natalia Abbakumova in Riga, Latvia, contributed to this report..

Fri Sep 23 , 2022
The Federal Reserve on Wednesday said it is once again turning to its most powerful weapon to tamp down the hottest inflation in 40 years: Boosting interest rates. The central bank raised its benchmark interest rate by 0.75 percentage point, marking the fifth hike this year and the third consecutive increase of that size.Higher rates… 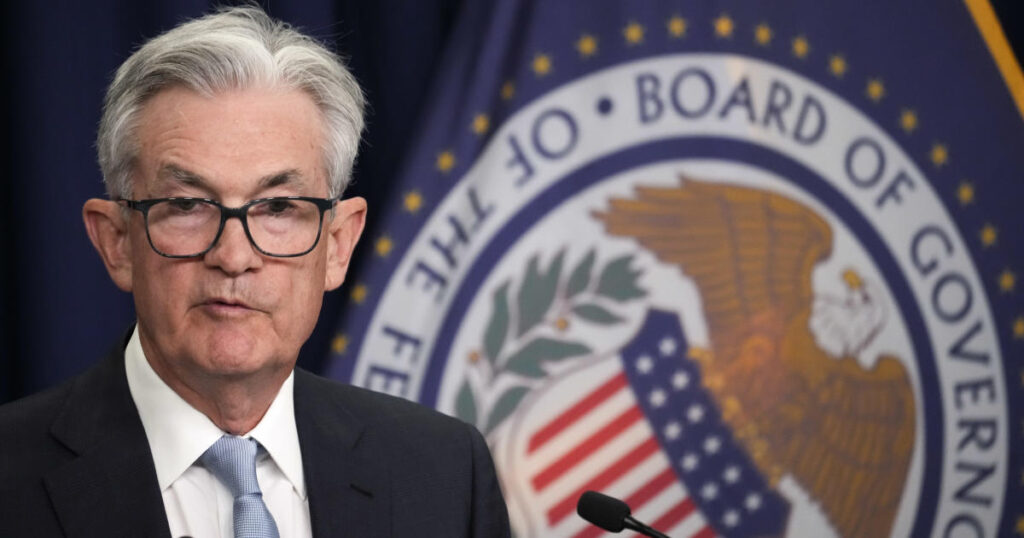