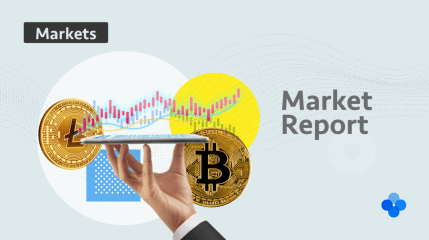 Market Watch Monthly — Bitcoin and crypto market developments and performance in April 2021 Key takeaways BTC reached a record high above 64,800 USDT in mid-April, but the subsequent decline saw it ending the month with negative returns.Global risk assets saw a big upswing in April due to declining Treasury yield.Trading sentiment was bullish before Coinbase’s stock market listing, but the market lost momentum after the listing.ETH posted its eighth consecutive month of gains and older coins came under the spotlight as the market sought returns from altcoins.Decentralized exchanges saw record volumes and top-tier DeFi tokens realized large gains.Bitcoin recap
April broke Bitcoin’s winning streak despite it being a historically positive month for price action.

The leading cryptocurrency ended April with a loss of 3.62% after posting a new all-time high of 64,847 USDT on April 14 per the OKEx BTC spot price.The subsequent retracement saw support from spot buying power in the last week of the month as BTC rebounded to 57,000 USDT levels, however, it was not enough to print a green monthly candle.
Additionally, we noted that large BTC options expiries continued to pressure the market as the price repeatedly fell back to max pain levels each week.

Global asset performances
The Dollar Index saw a significant pullback in April, falling from 93, all the way down to around 90 before rebounding towards the end of the month.The 10-year U.S.Treasury yield also fell from a peak of 1.75% in March to a low of 1.53% in April.These factors led to the general upward price movement in risk assets.However, the Volatility Index or VIX, denoting market expectations of volatility in the stock market, remains near the bottom.10-year Treasury yield is no longer surging higher while the Dollar Index has retreated in April.Source: TradingView
From a returns perspective, Bitcoin underperformed global assets in April with a monthly decline of 3.62%.The S&P 500 Index and the Nasdaq Composite both continued to rise at a strong pace in April, posting 5.3% and 5.4% monthly returns, respectively.

Meanwhile, the Bloomberg Commodity Index marked its strongest (8.3%) monthly advance in nearly a year due to the upswing in inflation, and gold prices also rose 3.6% in the month due to a weakening dollar.April’s trading sentiment on OKEx
Bitcoin maintained its strong bullish momentum at the beginning of April, benefiting in large part from the hype around Coinbase going public.The OKEx quarterly BTC futures contract premium had risen to more than 10%.The unusual jump in futures premium was inevitably captured by arbitrageurs, and then on the day of Coinbase’s direct listing on Nasdaq, Bitcoin went into a downward spiral as market participants “sold the news.”
A major flash crash occurred on the third Sunday of April, when liquidity was thin.

A 16% drop took the price from 61,000 USDT down to 50,900 USDT at one point, triggering the largest 24-hour liquidations across exchanges ever at $9.54 billion.On the same day, BTC open interest dropped by 27% on OKEx, and it failed to return to pre-collapse levels until the end of the month.
Moreover, during the flash crash, both the quarterly as well as the bi-quarterly futures were briefly but significantly below the perpetual swap price.This unusual occurrence in a bull market caught many traders off guard.
Bitcoin didn’t really start to rebound until April 25, after it made a fake downward break to 47,000 USDT levels.The rapid rebound in the final week was driven by spot buying, and the market leader closed the month at 57,142 USDT per OKEx spot price.The Coinbase IPO became a driver for price action in April.

Source: OKEx Old names back on the stage
ETH posted its eighth consecutive month of gains in April per the OKEx spot price, and a 48% rally last month is also its best monthly gain after January 2021.
Ethereum’s Berlin hard fork went live on April 14, and market participants appear confident in the ETH price ahead of this summer’s London hard fork, which is set to include the much-anticipated EIP-1559.As a result, the ETH price jumped from 1,850 USDT in early April to 2,800 USDT levels by the end of month.
The surge in ETH further drove the altcoin season towards another peak.The altcoin-season index, provided by the Blockchain Center, reached a high of 98 in mid-April.

The last time we saw this figure was in early 2018.
This also resulted in Bitcoin’s dominance falling 17% to become less than 50% by the month end, per data from TradingView.The altcoin season index hit a high of 98 in mid-April.

Source: Blockchain Center
Among altcoins, DOGE undoubtedly stole the spotlight.This meme coin achieved a whopping 487% surge in April, driven by momentum from consistent Twitter hype from the likes of Elon Musk over the past few months and its notoriously active community.

DOGE finished the month with a $42 billion market cap, entering the top five cryptocurrencies by market cap on major aggregators.
We also saw market participants rotating from BTC to older altcoins that were popular during the last bull run, in 2017.As a result, XRP and ETC grew 186% and 167% in April, respectively, while other major altcoins also performed positively, with the exception of DOT.DOGE stole the spotlight with a 487% monthly return.Source: OKEx DEXs recorded high volumes and Ethereum alternatives rose
Decentralized exchanges recorded their highest monthly trading volumes ever per data from Dune Analytics.

Among them, Uniswap was the most active DEX, posting $36 billion in volume to dwarf competitors.DEXs achieved the highest monthly trading volumes ever in April.Source: Dune Analytics
In terms of price performance, top DeFi protocol tokens reaped higher returns than second-tier projects.Lending giants with the highest total value locked figures, such as Maker and Compound, realized the best yields, with their native tokens MKR and COMP up 103% and 80%, respectively.UNI, the governance token of top DEX Uniswap, also ended up with a 42% monthly return.On the other hand, LUNA, which had more than tripled in price last month, pulled back in April and was 12% down for the month.

Top-tier DeFi tokens saw better returns in April.Source: OKEx
Moreover, we observed that permissionless Ethereum Virtual Machine-compatible blockchains gained traction in April since Ethereum 2.0 is yet to be released.
Since migrating decentralized apps from Ethereum to EVM blockchains is relatively easy, protocols like Polygon (previously Matic) and Fantom, attracted apps and users, and their native assets also posted big gains in the month at 128% and 74%, respectively.
OKExChain, an open-source public blockchain designed by OKEx for trading-specific applications, also obtained EVM-compatibility recently and saw its native token OKT grow 38% last month.MATIC and FTM saw huge gains as some apps migrated to EVMs.Source: OKEx Looking ahead
Impacted by the big rise in DOGE, various dog-themed meme tokens — namely SHIB — realized jaw-dropping returns at the beginning of May.While still in a bull market, we can hardly say that this is an ideal scenario.Small altcoins with no fundamentals being pushed to skyhigh valuations could cause Bitcoin to stagnate due to lack of funds.
ETH, on the other hand, has more room on the upside due to the strong bullish consensus in the market, and old names could continue to outperform Bitcoin in May, just as they did back in the second half of 2017.
Looking at the monthly returns chart, although this April wasn’t able to replicate history, May is still the month where Bitcoin has made strong advances in the past.The average monthly return of May is 21%, but the market leader needs to get back above the 60,000 USDT mark before it can tackle another all-time high.

May is historically a great month for Bitcoin.