Bitcoin WARNING: BTC will be ‘WORTHLESS and have ZERO VALUE’ in 2019 BITCOIN is finished, according to one of the industry’s most influential figures. PUBLISHED: 11:19, Mon, Dec 17, 2018 | UPDATED: 19:43, Mon, Dec 17, 2018 0 Colourful Canadian Calvin Ayre, founder of Bitcoin Cash and now one of the figureheads of BTC Satoshi…

Bitcoin WARNING: BTC will be ‘WORTHLESS and have ZERO VALUE’ in 2019 BITCOIN is finished, according to one of the industry’s most influential figures. PUBLISHED: 11:19, Mon, Dec 17, 2018 | UPDATED: 19:43, Mon, Dec 17, 2018 0
Colourful Canadian Calvin Ayre, founder of Bitcoin Cash and now one of the figureheads of BTC Satoshi Vision, says the flagship cryptocurrency will become worthless in 2019. In an exclusive interview with Express.co.

uk, the controversial character believes bitcoin is being purposely driven into the ground and will almost cease to exist next year.

He said: “ I’m afraid I am predicting it to go to zero value as it has no utility, it does not do anything and they intentionally are anti-scaling.

“Bitcoin, the technology and economic model, are alive and well with Bitcoin SV (Satoshi Vision) and is going to have an amazing year.” Related articles Bitcoin analysis: BTC volume is lacking
Last month, billionaire Mr Ayre forced the hard fork – splitting one currency into two separate new ones – of his Bitcoin Cash (BCH) – a crypto he launched in 2017.
BCH was divided to become Bitcoin ABC and Bitcoin SV (Satoshi Vision) during what was widely described as a civil war between existing BCH entrepreneurs.
The ABC (Adjustable Blocksize Cap) breakaway was led by Roger Ver and Jihan Wu of Bitmain, as they faced off against Mr Ayre and his British cohort Dr Craig S Wright.

The ABC camp were keen to maintain the crypto’s block size at 32MB, while Dr Wright and Mr Ayre wanted to increase it to 128MB – a move they believe stays true to the original plans by mysterious bitcoin creator Satoshi Nakamoto (hence “Satoshi Vision”). Bitcoin news: BTC is forecast by Calvin Ayre to be worthless next year (Image: GETTY) I’m afraid I am predicting it to go to zero value as it has no utility, it does not do anything and they intentionally are anti-scaling Calvin Ayre
The basic idea behind the block size is based on blockchain – the underlying technology of cryptocurrencies.
A higher block size limit should mean the currency attached to it is less likely to struggle under pressure.
Many critics point the finger of blame for bitcoin’s current troubles squarely at the hard fork which Mr Ayre and Dr Wright instigated.
It was in the days following the dramatic split that bitcoin’s year of solid sideways movement collapsed into volatility which has continued since, leaving the price of a bitcoin back at about $3,200 this morning.

With his trademark nonchalance, though, Mr Ayre rejects any suggestion that the hard fork was partially staged to purposely destabilise bitcoin.

Bitcoin news: Express.co.uk spoke to Calvin Ayre, founder of Bitcoin Cash (Image: GETTY)
He said: “The hard fork was a distraction but the downturn is because the SegWit coin that’s erroneously still called ‘bitcoin’ now follows the old-fashioned financial trends.
“It’s also because people wrongly focus on market cap when it should be about scalability and actual usability.

“Bitcoin SV is a currency, not an asset just to be held, and has real utility.
“That said, there is no question that the hash dumping that the ABC conspirators did, in violation of the Nakamoto Consensus Rules that run bitcoin, destabilised the markets even more.”
The first quarter of 2019 is set to map out the road ahead for both bitcoin and Bitcoin SV, with the original asset due to be listed by Nasdaq. Analysts will be watching closely to see what momentum BSV can attract after Christmas.
It will also be interesting to see if others begin to turn away from bitcoin.

As for Dr Wright’s thoughts, he is pretty clear on the question of ‘is bitcoin finished?’.
He said: “BTC is, but it is a sham bitcoin.
“SV is what bitcoin was and is the only way it works.

”
2018 closed as a very interesting time for bitcoin.
2019 looks set to open in much the same fashion.

Mon Jan 14 , 2019
Tweet Photo: Getty The tech world told a lot of lies in 2018, and it was caught in those lies at what feels like an unprecedented rate. Some Silicon Valley players even began to wake up to the lies they told themselves over the years. With such a flurry of falsehoods, it’s worth taking a… 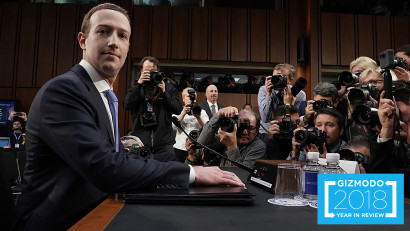