Davos touches the spot behind his ear to set his Memorex chip to record.He will need it both for the interview and his other business.He doesn’t try to stop his smirk as the asteroid comes into view.It is a wannabe villain’s hideout, concealed among the rubble of a wider belt of floating rocks.Davos has seen…

Davos touches the spot behind his ear to set his Memorex chip to record.He will need it both for the interview and his other business.He doesn’t try to stop his smirk as the asteroid comes into view.It is a wannabe villain’s hideout, concealed among the rubble of a wider belt of floating rocks.

Davos has seen plenty of places like this.He has interviewed plenty of rebels, dissidents and self-absorbed tech-heads who just can’t handle reality.They all come and go.Often they go right after he is done interviewing them.

Not all of them — that would be too obvious.He knows that.So do his contacts in the Amalgam.

Flying without network access isn’t easy, but Davos is used to such meeting conditions.He docks manually, but the lone guard in the dusty little hangar doesn’t look impressed.Davos is ever under-appreciated.Underestimated.

Network security seems as non-existent as the physical, and he just can’t help himself.

“You don’t want to check my chip? I could have a Trojan horse in my head.

Shall I just walk on in?” He has been scanned dozens of times.The uplink hidden in his chip, his direct contact to the Amalgam, is undetectable, and massively encrypted.

The guard just shrugs and points.Davos shrugs right on back and walks down the indicated tunnel.There are a few people, but not many.No one pays him any attention, and soon enough he is stepping through a door into an irritatingly plain room with rock walls.Dullness does not help sell interviews, even when the subject is an Amalgam outlaw.

Said outlaw is sitting at a bare metal table in the centre of the room.He is younger than Davos expected.

Actually, he is not much more than a snot-nosed kid in a rumpled shirt and loose trousers.He hasn’t combed his hair.

“The famous Davos,” the kid grins, toying with a retro-style tablet.

“The infamous X,” Davos replies.What kind of name is X, anyway? Still, he tries to keep the snark out of his voice.

Selling this interview to a major outlet could net him a decent payday, given the whispers about Blipcoin.And selling the kid’s location to the Amalgam will get him enough cash for something like six months on Ferdial 6.Half a year of soaking up the rays of those famous twin suns for real, rather than in a pale Memorex sim.

The kid looks pleased, and Davos struggles not to roll his eyes.

“I was surprised by the invite,” he says instead.That is, of course, a lie.

Someone like X always wants to tell their story, their side of things, and Davos is the best investigative reporter across ten populated systems.Maybe eleven, after this.

But he really just wants to sit on the beach under warm suns and drink exotic cocktails, not be here inside this dirty rock talking to a jumped-up petty criminal.

X waves at an empty chair across the table.“Tell me what you know, first.”

You are trading it across dark-links in the network, and have built quite the following.

Quite the customer base.”

The kid looks unimpressed.That is just tabloid gossip, after all.But tech rebels all have two things in common — they think they are smarter than the Amalgam, and they like to brag about it.

“Sounds just like those twenty-first-century crypto currencies.I hope your Blipcoin lasts a bit longer than them,” Davos says.

The kid takes the bait.

Every malcontent thinks they have something special.

That they are something special.“False digital currency is classed as counterfeiting by the Amalgam,” Davos says.“They will lock you away for life.”

“If they catch me,” X replies, and then his smile disappears and he leans forward, his gaze suddenly not so childish.“If you tell them where I am.”

Davos manages to keep his face still, but it’s a struggle.He has always been so careful.It has always just been him, his Memorex chip, and his contacts in the Amalgam.

“My father was quite the programmer.His little company was very in demand for fixing bugs in all sorts of systems.

He was too good, in the end, too much of a security risk.

I don’t know what happened to him.Not yet.The Amalgam keeps those types of records in their private network.”

“I don’t know what you are talking about,” Davos says.“I’m just a reporter.”

X picks up the tablet, fiddles with it.

“Over the years my father built up a phenomenal client base.Fixing code.Fixing glitches.

Fixing all those little blips.”

And now, through your uplink, directly to the Amalgam.”

The pale tones of a Memorex sim begin to wash across Davos’s vision.

He feels the warmth of twin tropical suns on his skin, hears the crashing of waves.

“I’m sorry,” X says, his voice fading.“I could work on your uplink from anywhere, but I don’t think I can let you keep running around working for the Amalgam.I can give you one last little sim visit to Ferdial 6, though.”

The story behind the story

I was scrolling through my news feed when I caught a glimpse of yet another article on cryptocurrency.I’ve never been that interested in that, but as the words flashed by I misread that most common of crypto names as ‘Blipcoin’.

How could you sell a ‘blip’, and what would that even mean, in digital terms? And what would be both digital and eminently tradeable in the future? I started with the idea of an unpleasant person who had developed a new type of cryptocurrency, but I just couldn’t get it to work.

It went much easier when I realized he was the good guy — or, at least, not the worst guy in the story..

Evil's Kristen Is Having a Baby With [Spoiler]?! Show Bosses Detail the Finale's Wicked Good News

Wed Aug 17 , 2022
Warning: This post contains spoilers from Evil‘s Season 3 finale. Uh… congratulations? At the end of Evil‘s Season 3 finale, Kristen uses new intel to track her missing egg to a mysterious address… and winds up at DF Global Solutions.If the name sounds familiar, that’s because it’s the company whose stock caused people to be… 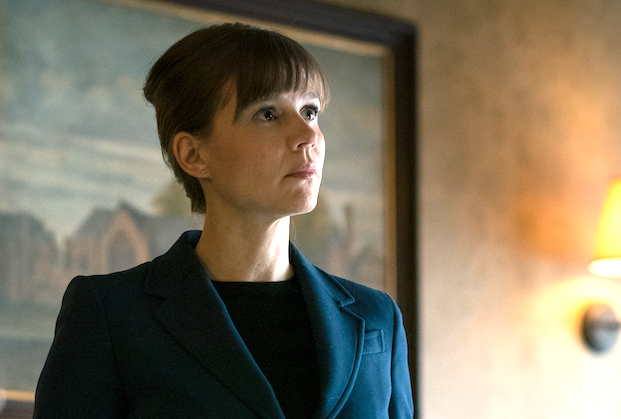