Home » Cryptocurrency News » Cryptocurrency News » Cardano leads tepid crypto market recovery ahead of Memorial Day Cardano leads tepid crypto market recovery ahead of Memorial Day May 30, 2021 0 Comments Fears of a nasty pre-Memorial Day selloff in cryptocurrencies may have been overstated, early indicators suggest.
Cardano’s ADA cryptocurrency was back in the spotlight Sunday, leading a tepid market recovery following news that the developer network was inching closer to launching smart contracts.Market update
The combined value of all cryptocurrencies rose 4.4% on Sunday to $1.6 trillion, according to data from Coingecko.Among the majors, it was Cardano’s ADA leading the rally with a 17% gain.ADA peaked at $1.70, according to TradingView, and was last seen hovering just north of $1.63.
At current values, Cardano was the fourth-largest cryptocurrency with a total market capitalization of $52.9 billion.ADA posted a strong rebound on Sunday after languishing for much of last week.Source: TradingView.
Every cryptocurrency in the top-20 reported gains on Sunday.Bitcoin (BTC) price rose 3.5% to $35,833, Ether (ETH) added 4.3% to $2,431 and Binance Coin (BNB) climbed 6% to $327.
Despite the modest rally, market sentiment remains tilted to the downside this weekend, with investors continuing to speculate about whether Bitcoin has actually bottomed out.The Crypto Fear & Greed Index has fallen to 10, on a scale of 1-100 where lower scores are associated with “extreme fear.” What’s driving ADA?
The presence of oversold conditions following the latest market correction appears to have worked in ADA’s favor on Sunday.

The cryptocurrency briefly penetrated the oversold indicator on the hourly Relative Strength Index Saturday before rebounding sharply over the next 24 hours.
Prior to the May 19 crypto market flash crash, ADA was among the top-performing digital assets.It peaked at $2.46 on May 16 before unwinding 55% over the next week.Looking beyond the immediate shift in market sentiment, ADA fundamentals remain intact.
On a fundamental note, ADA supporters are celebrating the launch of the Alonzo smart contract testnet by Cardano’s development team Input Output Hong Kong, or IOHK.As Cointelegraph recently reported, IOHK was eyeing a gradual deployment of Alonzo’s testnet in May and June.

Early adopters will have the opportunity to test Alonzo Blue, the first alpha testnet, over the next month.
As IOHK explained:
The ‘Alonzo’ hard fork will bring exciting and highly-anticipated new capabilities to Cardano through the integration of Plutus scripts onto the blockchain.These will allow for the implementation of smart contracts in Cardano, enabling the deployment of a wide range of new DeFi applications for the first time.
Cardano founder Charles Hoskinson recently indicated in a YouTube video that attention will shift to solving the scalability issue once the Alonzo rollout is complete.Share this: Bitcoin Price Will Now Never Officially go to Zero — Here’s Why A massive 18.52 million BTC buy order on Bitfinex will save Bitcoin from dropping to $0, thanks to Alistair Milne.

1943 Total views 16 Total shares Bitcoin (BTC) can crash hard, but not so hard that it ends up costing $0 — because one man is going to buy all of it.In tweets on July… Expect market regulation ‘avalanche’ if Biden beats Trump — Mulvaney Former Trump chief of staff Mick Mulvaney says a Joe Biden presidency would cause an “avalanche” of regulations.Some economists have also voiced concerns that the Biden administration would lead to a stock market pullback.This has led many crypto analysts to ponder what impact a strong stock market correction would have on the price of… Bitcoin’s realized cap is now $43 billion above the 2017 all-time high Bitcoin’s realized capitalization has soared above its 2017 record high, but Ethereum’s has struggled to reclaim its former highs Crypto market data aggregator Glassnode has published data indicating that Bitcoin’s (BTC) realized capitalization has increased by more than 50% since tagging its all-time high of $20,000 at the end of 2017.The realized capitalization metric measures… After Yesterday’s Bloodbath, Losses Continue for Major Cryptos, XRP Overtakes Ethereum Thursday, Nov.

15: yesterday’s fall in crypto markets continues today, with Bitcoin (BTC) dipping below the $5,400 mark, and total market capitalization dropping as low as $174 billion, according to data from CoinMarketCap.After an extended period of low price volatility, crypto markets experienced a massive decline yesterday, Nov.14, with Bitcoin dropping from its average… AMFEIX Threatens Users Who Share Coverage That Criticizes the Company The purported investment fund is exhibiting some shady behavior.

2389 Total views 16 Total shares Last week Cointelegraph published a story about investors having difficulty getting their money back from a crypto fund called AMFEIX, which promised high-yield profits for investors who sent them Bitcoin (BTC).Our story described more than 500 pending withdrawals from… Bitcoin bull launches pizza company that doesn’t accept crypto payments Just days before the anniversary of Bitcoin Pizza Day, Bitcoin proponent Anthony ‘Pomp’ Pompliano has launched a pizza company aimed at supporting small business and the Human Rights Foundation’s Bitcoin Development Fund.In an announcement on Twitter today, Pomp said his Bitcoin Pizza brand would be launching in ten U.S.cities beginning on Saturday, May 22.… 43% of Investors Interested in Bitcoin Are Women: Grayscale Survey A report published on Dec.4 by Bitcoin (BTC) fund operator Grayscale suggests that 43% of investors interested in Bitcoin are women.The study involved 1,100 United States investors of ages between 25 and 64 surveyed between March 28 and April 3, 2019.

All the respondents were involved in personal investing and held at least $10,000… The role of decentralized networks in a data-abundant, hyperconnected world When it comes to computer data storage, it can seem like we are running out of numbers.If you are old enough, you may remember when diskette storage was measured in kilobytes in the 1980s.If you are a little younger, you are probably more familiar with the thumb drives denominated in gigabytes or hard… New DeFi alliance to connect Eastern and Western DeFi markets The Chinese government is supporting a new global DeFi association.Amid the ongoing craze around decentralized finance, or DeFi, a blockchain startup in China is launching a global DeFi initiative.Conflux Network, a permissionless blockchain startup, has launched a new DeFi-focused association focused on international cooperation of major industry players.Called “Open DeFi,” the new alliance aims… Leave a Reply You must be logged in to post a comment.Search.

Wed Jun 30 , 2021
Bitcoin 'time to buy' ad banned in the UK for being irresponsible - Posters for cryptocurrency exchange service Luno â shown across the London Underground network and on London buses this year â contained a cartoon image of a bitcoin with the words "If you're seeing Bitcoin on the Underground, it's time to buy." -… 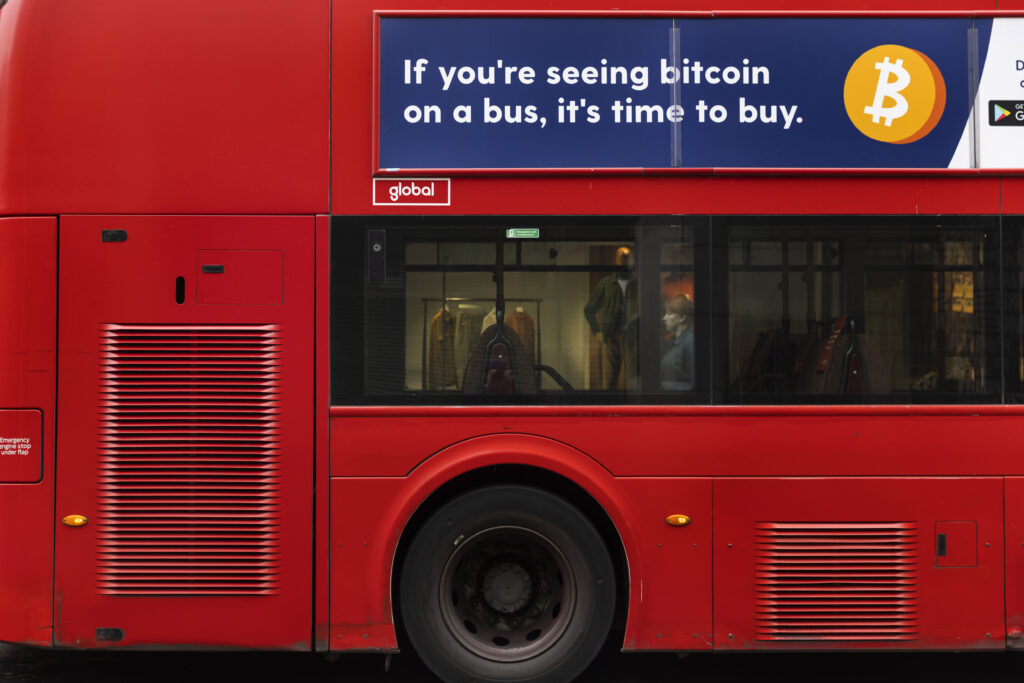