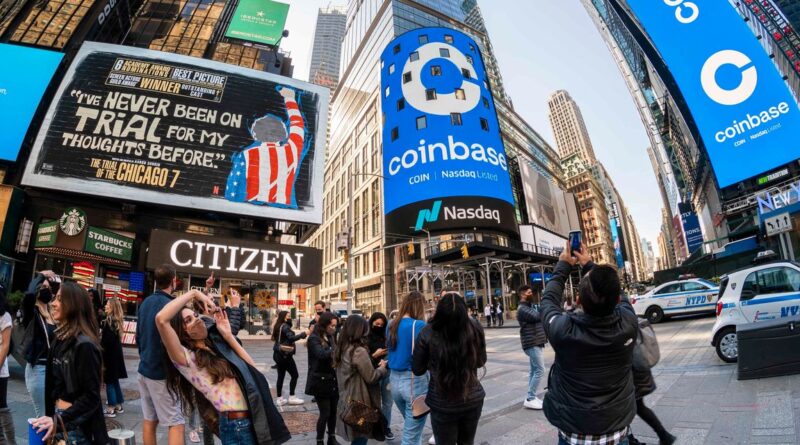 Cryptocurrency Comes to Retirement Plans as Coinbase Teams Up With 401(k) Provider Workers at participating companies could invest up to 5% of their account balances in cryptocurrency A small group of workers will find something new in their 401(k) plan starting in July: the option to invest in cryptocurrency.ForUsAll Inc., a 401(k) provider, announced earlier this month a deal with the institutional arm of Coinbase Global Inc., COIN -1.10% a leading cryptocurrency exchange, that will allow workers in plans it administers to invest up to 5% of their 401(k) contributions in bitcoin, ether, litecoin, and others.Executives at ForUsAll won’t say how many of the firm’s 400 employer clients have signed up for the cryptocurrency platform so far.Founded in 2012, the company provides automated 401(k) administration, menus of low-cost mutual funds, and access to human advisers.With just $1.7 billion in retirement-plan assets, ForUsAll represents a small piece of the $22 trillion retirement-account market.But its embrace of crypto comes at a time of heightened mainstream interest in digital currencies.That said, crypto-investing is virtually nowhere to be found in 401(k) plans and individual retirement accounts at the moment.

“There is way too much volatility,” said Lew Minsky, president of the Defined Contribution Institutional Investment Association, a research and advocacy organization for investment managers, consultants and others in the 401(k) industry.

Bitcoin, for instance, has lost around 40% of its value in just two months after hitting a record high in April.The 401(k) industry is having “meaningful conversations” about adding alternative investments, including private equity, to 401(k) plans, Mr.Minsky said.Currently, 1% of the assets in custom-designed target-date-funds in 401(k) plans are in private equity and 2% are in hedge funds, according to DCIIA.Mr.Minsky said he wasn’t aware of any plans by his organization’s members to make cryptocurrency available.Firms including Fidelity Investments and Charles Schwab Corp.don’t allow customers to buy or sell cryptocurrency in taxable accounts or IRAs.

But they can purchase shares in trusts that invest in cryptocurrencies from companies including Grayscale Investments LLC.Fidelity has filed with the Securities and Exchange Commission to offer a cryptocurrency exchange-traded fund.Participants in some 401(k) plans that use Fidelity and Schwab as an administrator can invest in certain Grayscale products if their employer offers a so-called brokerage window, which allows participants to buy a range of stocks, mutual funds, ETFs and other securities.Proponents of adding a small dose of cryptocurrency to a portfolio argue this can raise expected returns without increasing overall risk.

Some believe crypto can serve as a hedge against inflation.“This is just another asset class,” said Mike Alfred, head of strategy at NYDIG, a financial services and technology company that provides bitcoin investments to institutions.Previously the co-founder of a company that publishes data on 401(k) plans, Mr.Alfred said cryptocurrencies have started to pop up in portfolios managed by institutional investors.

New Zealand’s KiwiSaver retirement savings program and some U.S.university endowments have reportedly invested in cryptocurrencies or funds that buy them, or have taken stakes in companies in the fast-growing industry.Paul Selker, president of Spark Street Digital, which live-streams events that have included the launch of Pete Buttigieg’s presidential campaign, said he was attracted to the cryptocurrency option ForUsAll will offer because he believes his 14 employees—many in their 20s and 30s—will “be more engaged” with the 401(k) plan.He hopes they will boost their savings from their current average rate of 8.5% of pay.SHARE YOUR THOUGHTS Would you put 401(k) contributions into crypto? Why or why not? Join the conversation below.Mr.Selker said he believes the “guardrails” ForUsAll has built into the service will help his employees invest prudently.“They’re not going to let my people YOLO Dogecoin to the moon,” he said of ForUsAll, which Spark Street Digital hired in 2015, when it started a 401(k) plan.

David Ramirez, chief investment officer at ForUsAll, said workers of companies that sign up for the new offering can elect to transfer up to 5% of their account balances into a self-directed cryptocurrency window that uses Coinbase’s institutional trading platform, where they will have access to about 50 cryptocurrencies.Employees can also invest up to 5% of each payroll contribution in cryptocurrency.Mr.

Ramirez said participants who invest in cryptocurrency must acknowledge having read disclosures explaining it is a volatile asset.

“Our guidance is not to be day trading anything, whether a stock or crypto,” he added.The company plans to send alerts to participants when the value of their crypto investments exceeds 5% of the balance, urging them to sell some crypto and transfer the profits into stocks and bonds.When the balance in crypto holdings exceeds 5% of a portfolio’s value, an employee wouldn’t be allowed to transfer any more of their current balance into it, although the ongoing contributions can continue.ForUsAll said it plans to eventually add small allocations to other alternative investments, including private equity, venture capital, and real estate.

Bitcoin, Dogecoin, Ethereum: Cryptocurrency Markets Related coverage, selected by the editors Write to Anne Tergesen at Copyright ©2020 Dow Jones & Company, Inc.All Rights Reserved.87990cbe856818d5eddac44c7b1cdeb8 Appeared in the June 11, 2021, print edition as ‘Bitcoin Investing Allowed In 401(k)s.’ Most Popular News Crawfish Boils Land Rookies in Hot Water If You Sell a House, the Buyer Might Be a Pension Fund Nantucket’s Short-Term Rental War Is Pitting ‘Neighbor Against Neighbor’ Solar Eclipse 2021: What Time Is the June ‘Ring of Fire’ and How to Watch U.S.Inflation Is Highest in 13 Years as Prices Surge 5% Most Popular Opinion Opinion: Joe Biden Bungles His Crisis Opinion: America’s Energy Gift to Dictators Opinion: The Deadly Results of Defunding the Police Opinion: Barr, Garland and Lafayette Park Opinion: Schumer Finds He Lacks a Political Mandate Most Popular Videos – – – – -.