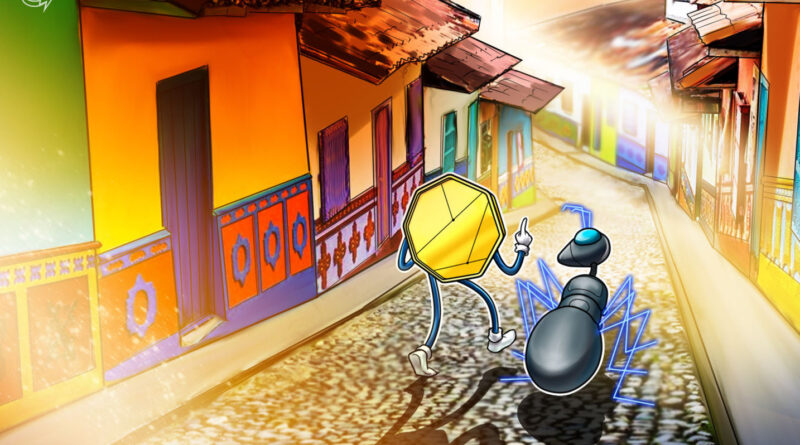 Colombia takes another important step towards regulating the nation’s crypto sphere.The government of Colombia has approved on September 22 a pilot program that calls companies to test crypto transactions until December 31 within the regulatory sandbox just passed by the country’s financial watchdog.During a panel titled “Overview of the Regulation of Crypto Assets in Colombia,” Jorge Castaño, head of Colombia’s Financial Superintendence (SFC), revealed that companies wishing to trial crypto transactions should apply by the end of the year, as the pilot will run in 2021.The new regulatory sandbox was approved by the Ministry of Finance and Public Credit on September 14.The SFC elaborated on the sandbox: “This space allows the SFC to maintain a balance between adequate regulation aimed at carrying out comprehensive supervision of the entities under surveillance, the prevention of crisis situations, the illegal exercise of financial activity and the promotion and support of new technological advances applied to financial services.” The panel’s host was Mauricio Toro, a local congressman and the author of the bill that aims to regulate the crypto industry in Colombia.Castaño told Toro that the pilot program will develop in five stages: application, selection, structuring, monitoring and feedback.

Although there is no exact timetable for the pilot program during 2021, the head of SFC mentioned that “four Colombian financial services providers” expressed interest in participating in the trial.On April 4, 2019, a draft bill to regulate crypto exchange platforms in Colombia came to light.The aim of this law was to define in general terms how companies offering crypto exchange services in Colombia should operate.
The debate around the bill’s approval has been delayed by bureaucratic issues, such as waiting for a clear stance of the SFC towards crypto.However, with the launch of the pilot plan to trial crypto transactions, Congressman Toro commented on the panel that this could “speed up discussions” to be able to pass the bill in 2022 if all goes well in the Congress.Share this: Can Bitcoin go below $10K again? The ‘Trondicator’ may have the answer The markets are bleeding out.Ether (ETH) dropped from $500 to $300 in a matter of days, people are screaming that the DeFi bubble has burst already, and are crying about their favorite “[insert food name] coin” crashing in value after a one-month-old Twitter account rug pulled 38K ETH from investors.Yes, it’s just another week… Italian Banking Association Completes First Test of Blockchain-Based Interbank System The Italian Banking Association (ABI) has revealed they successfully passed the initial phase of testing their blockchain-powered interbank system, Italian financial media outlet Ansa reported September 29.By applying distributed ledger technology (DLT), the group of 14 Italian banks is planning to improve interbanking processes.

Specifically, the association intends to boost the processing time of operations,… Domain Registrar EnCirca Accepting Applications for Ethereum Addresses Domain registrar company EnCirca has announced that it is accepting pre-registration applications for the Ethereum website extension, “.ETH”.EnCirca said that it will be accepting applications until August 10, in a press release on July 18.EnCirca also said that they were the first registrar approved by the Internet Corporation for Assigned Names and Numbers (ICANN)… World Economic Forum Forms Tech Policy Councils for Blockchain, AI, IoT The World Economic Forum (WEF) announced the formation of six separate “fourth industrial revolution councils” to work on new technology policy guidance, according to a press release shared with Cointelegraph on May 29.Per the release, the councils intend to help regulators regulate artificial intelligence, autonomous mobility, blockchain, drones, internet of things and precision medicine.The… Ethereum Hard Fork Live, Stolen ETH Moved, ‘Hodlers Are Insane’: Hodler’s Digest, Dec.

2–8 Coming every Sunday, Hodler’s Digest will help you track every single important news story that happened this week.The best (and worst) quotes, adoption and regulation highlights, leading coins, predictions and much more — a week on Cointelegraph in one link.Top Stories This WeekEthereum completes Istanbul hard forkIt’s happened! Ethereum’s much-anticipated shift to Istanbul has… New Kyber Upgrade Deployed to the Ethereum Mainnet Kyber Network recently put KyberDAO and a protocol upgrade into play.Kyber Network just put a protocol upgrade into operation on its mainnet in tandem with its decentralized autonomous organization, or DAO.Kyber fired up its Katalyst Protocol Upgrade as well as its decentralized finance, or DeFi, solution — KyberDAO, the Kyber Network said in a July 7… Researchers Reveal Crypto Mining Botnet’s Sneaky Tactics The cybercriminals behind the crypto mining Stantinko botnet have devised some ingenious methods to evade detection.Malware analyst Vladislav Hrčka from cybersecurity firm ESET sounded almost impressed as he unveiled the firm’s latest findings, and potential countermeasures, in a blog post.“The criminals behind the Stantinko botnet are constantly improving and developing new modules that often… As US Banks Running Out of Coins Bitcoin Keeps On Chugging Along A U.S.

bank is offering its customers a 5% bonus for delivering coins to one of its branches while Bitcoin has quadrillions of Satoshis to spare.1796 Total views 18 Total shares The U.S.economy is experiencing a shortage of coins.With this in mind, the Community State Bank, or CSB, of Milwaukee is offering… Israeli Software Firm Goes Behind Regulator’s Back to Pay $250,000 in BTC Ransom Israel-based Sapiens reportedly paid in Bitcoins for a ransom requested during an attack that reportedly happened between March and April.1019 Total views 29 Total shares An Israel-based company reportedly paid $250,000 in Bitcoin for a ransom payment demanded by hackers that threatened to shut down its systems after a ransomware attack.According to a source… Leave a Reply You must be logged in to post a comment.Search.