Lyllah Ledesma Lyllah Ledesma is a CoinDesk Markets reporter currently based in Europe.She holds bitcoin, ether and small amounts of other crypto assets. Follow @LedesmaLyllah on Twitter Good morning, and welcome to First Mover.I’m Lyllah Ledesma, here to take you through the latest in crypto markets, news and insights. Price Point: Crypto markets were suddenly…

Lyllah Ledesma is a CoinDesk Markets reporter currently based in Europe.She holds bitcoin, ether and small amounts of other crypto assets.

Good morning, and welcome to First Mover.I’m Lyllah Ledesma, here to take you through the latest in crypto markets, news and insights.

Price Point: Crypto markets were suddenly looking bullish on Monday as bitcoin had its best day of the year, and ether, the second-biggest cryptocurrency, posted even bigger gains, amid speculation that a rally might be in the making ahead of the Ethereum network’s upcoming ” Merge.” Market Moves: Omkar Godbole looks at the Merge’s market impact in depth and ETH’s staked derivative on Lido finance called stETH.This web version of today’s First Mover newsletter was produced by Sage D.Young.

Price Point Bitcoin (BTC) was trading up 5% on the day, hitting its highest level in over a month.

The world’s largest cryptocurrency by market capitalization has not traded above $22,000 since June 16, 2022.

BTC traded as low as $18,800 last week and has made significant gains since, trading up 11% over the last seven days.

But the big story of the day in crypto markets was ether (ETH), the second-largest cryptocurrency, which is picking up momentum in advance of a big upgrade now expected in September.

Ether has accelerated its rally Monday morning, outperforming bitcoin, perhaps an indication that the market is starting to take the network’s upcoming “ Merge ” seriously.

ETH was trading up 10% over the last 24-hours at $1,477.On Friday, a member of the Ethereum community tweeted an outline of dates for the long-awaited Merge and prior events.The Merge is set to take place on Sept.

“The upcoming Merge is definitely a case for the hype in ETH,” said Laurent Kssis, head of Europe at crypto asset manager Hashdex.Kssis noted that short ETH liquidations were triggering buy orders which also accelerated the positive price movement.

Over the last seven days there has been a general catch up for altcoins , with Polygon’s MATIC up 62%, AVAX by 37% and NEAR by 24%.

Renewed clarity about the timeline of programmable blockchain Ethereum’s highly-anticipated “Merge” upgrade, dubbed Ethereum 2.0, seems to have galvanized investor interest in ether and its staked derivative on Lido finance called stETH, offering a reprieve to the battered cryptocurrencies.

On Thursday, the Ethereum Foundation member Tim Beiko suggested Sept.19 as the provisional launch date for the Merge, which will see the world’s biggest smart contract blockchain transition from the energy-intensive proof-of-work consensus mechanism to a more environment-friendly proof-of-stake mechanism.

Since Beiko’s announcement, ether has rallied roughly 22%, hitting a one-month high of $1,475, according to CoinDesk data.The token registered a 15% gain in the seven days to July 17, the biggest jump since March.

The staked ether’s discount relative to the price of ether has narrowed to 0.98 from 0.96 since Thursday, per data source CoinMarketCap.The token representing an equivalent amount of ether staked in Lido Finance is supposed to trade at a price closer to ether.

stETH’s price fell into a discount of 0.93 to ETH following the collapse of Terra in May and has not been able to recover since.Lido Finance is a liquid staking protocol allowing users to stake coins while retaining liquidity and bypassing the burden of owning a minimum of 32 ETH to become a staker.Users can redeem staked ETH for ETH only after transfers are enabled on Ethereum 2.0.

“ETH has undergone a rapid change in narrative over the past week with speculators purely focused on the upcoming ‘Merge’ as a catalyst for appreciation,” said Matthew Dibb, COO and co-founder of Stack Funds.”Adding to this, we believe that there is a significant amount of sidelined capital that has been waiting on bullish momentum to establish new positions.”

Several observers consider Ethereum’s impending transition equivalent to three bitcoin halvings – a programmed code that halves the per block BTC supply every four years – and leading to a 90% reduction in ether’s annual issuance.Simply put, the transition is likely to bring a store of value or deflationary appeal to ether.The upgrade has been long pending.

Like other market participants, ether investors tend to factor in bullish developments in advance.For instance, ether rallied over 60% to $2,800 in the three weeks leading up to the London hard fork , or code modification, implemented on Aug.5, 2021.

The hard fork activated a mechanism to burn the portion of fees paid to miners.

The Ethereum 2.0 upgrade has been long overdue and has seen several delays.However, the recent successful merges of the Ropsten and Sepolia testnets and the Goerli testnet’s planned transition to proof-of-stake on for Aug.11 has raised hopes for the mainnet merge in September.

Latest Headlines The ‘Merge Trade’ Has Begun, Experts Say, as Ether Surges and stETH Discount Narrows : “ETH has undergone a rapid change in narrative over the past week, with speculators purely focused on the upcoming ‘merge’ as a catalyst for appreciation,” one observer said.A ustralian Central Bank Chief Believes Regulated Private Tokens Could be Better Than CBDCs, Reuters Reports : Governor Phillip Lowe spoke at a panel discussion at the G20 finance officials’ meeting in Indonesia on Sunday.Coinbase Secures Regulatory Approval in Italy : Coinbase joins Binance in securing approval from Italian regulator Organismo Agenti e Mediatori (OAM).Indian Finance Minister Echoes Central Bank’s Crypto Ban Call, but Says Global Collaboration Is Required : Finance Mister Nirmala Sitharaman made her comment in answer to a series of written questions from a member of parliament about cryptocurrency legislation.Binance Fined Over $3.3M by Dutch Central Bank : The fine was issued as the exchange continued to offer services in the Netherlands without proper registration..

Ether (ETH) Rallies After a Large Short Squeeze in the Futures Market – crypto.news

Tue Aug 16 , 2022
According to Glassnode data , the sudden spike in the prices of Ethereum has been attributed to a large short squeeze in the futures markets.Over $97 million worth of bets were taken out in just an hour, pushing the price up by around 12%. Ethereum Price Breakout Triggered by Merger The price of Ethereum rallied… 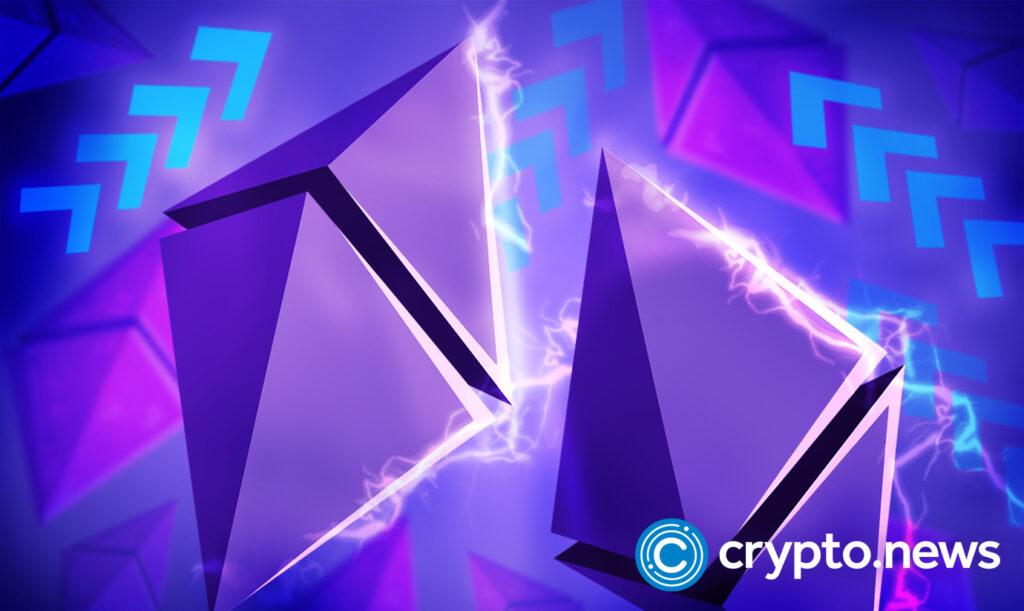