W hether you know a lot about cryptocurrencies or not, you’ve probably heard about bitcoin.You may have even heard about Ethereum, Litecoin or Bitcoin Cash.Other lesser-known tokens include Cardano, Modero, and Dogecoin, which started as a joke and now widely considered the original meme coin.And then there are stablecoins like Tether, which is pegged to…

W hether you know a lot about cryptocurrencies or not, you’ve probably heard about bitcoin.You may have even heard about Ethereum, Litecoin or Bitcoin Cash.Other lesser-known tokens include Cardano, Modero, and Dogecoin, which started as a joke and now widely considered the original meme coin.And then there are stablecoins like Tether, which is pegged to the U.S.

However, this list is about the more obscure cryptocurrencies, at least for those who haven’t spent a significant amount of time diving into the deep end of the crypto pool.Some of these coins may be worth the money to the right investor, giving them solid investment potential.

While investors are quick to jump on the bandwagon with those that are traded purely for their value as currencies, there is a much larger class of cryptos that are more valuable for their utility than their worth as a digital currency.

For example, some cryptocurrencies offer support for smart contracts, which are programs stored on a blockchain that run when certain preset conditions are met.Well-known crypto whale Ruadhan of Seasonal Tokens believes smart contracts have completely changed the nature of cryptocurrency investment.

“Earlier cryptocurrencies could only be used for payments, and they were good investments because increasing adoption led to price appreciation,” he explained.“The most innovative cryptocurrencies today aren’t designed to be money.They’re valuable because they allow people to do things they could never do before.”

Ruadhan noted that the capabilities of these new cryptocurrencies give them an investment value that doesn’t depend on continually increasing adoption.They have value not only as tradeable currencies but also from a utility standpoint based on what they actually do.

“Cryptocurrency investment today doesn’t need to be based on speculation,” Ruadhan added.

These are the top five cryptocurrencies you’ve never heard of.

Helium Helium may be less obscure than the others on this list, but it is still a lesser-known cryptocurrency that deserves more mainstream attention than it receives.The developers of Helium describe the Helium Blockchain as “The People’s Network.” The foundation of the Helium Blockchain is establishing a dedicated network for the so-called “Internet of Things,” which connects everything from thermostats to refrigerators to the internet.

Helium is designed to create a network for the Internet of Things that circumvents the traditional Wi-Fi network infrastructure.

Anyone who wants to mine for Helium can do so if they have a low-power Helium router installed, which earns them HNT for providing connectivity to the network.

Helium now has more than 200,000 hotspots in more than 100 countries, and more and more people and businesses are joining the network.Together, all those hotspots create a decentralized Wi-Fi network where Internet of Things devices can communicate.

Believe it or not, Helium has become so popular that there is a waitlist for those who want to purchase one of their routers.

As of the time of this writing, the cryptocurrency has a market capitalization of over $3.4 billion.Helium is currently available on Binance and FTX Exchange in the U.S.

Livepeer Livepeer is built on the Ethereum blockchain, which is known for its offering of smart contracts.Software developers build smart contracts and store them on a blockchain like Ethereum.The contracts run automatically when a predetermined set of conditions is met, and they’re often used to automate the execution of an agreement without the use of an intermediary.

Livepeer touts itself as a “decentralized video streaming network built on the Ethereum blockchain” and “the world’s open video infrastructure.” The open-source smart contracts running on the Livepeer network provide an infrastructure that powers video streaming applications much more efficiently than standard online networks and at infinite scale.

Livepeer is available on Coinbase, Gemini and Kraken, among other crypto exchanges.You can also invest in Livepeer through the Grayscale Livepeer Trust.

Grayscale is a highly trusted and reputable company that provides exposure to popular cryptocurrencies easily through your brokerage account.Livepeer has a market cap of about $750 million as of the time of this writing.

Ergo Ergo describes itself as “a platform for Contractual Money.” The developers behind Ergo created it in response to the stagnation they observed in blockchain technology.The cryptocurrency taps into various “technical and economic ready-to-use ideas that add value but do not reduce the known advantages of blockchain systems.”

The primary focus for the Ergo network is to grant “ordinary people” a way to efficiently and securely implement financial contracts in a decentralized manner without trust.The benefit of using Ergo instead of the traditional financial system is the fact that it doesn’t allow bailouts, blacklists or other forms of discrimination.

Ergo developers have designed the protocol to be long-lasting, which they believe makes it useful for contracts lasting an entire lifetime and also as a good store of value.

Ergo is available on smaller crypto exchanges like KuCoin, Gate.io and ProBit Global, but you must purchase Tether or bitcoin first and then trade it for Ergo.The cryptocurrency currently has a market cap of around $136 million.

Polkadot Polkadot was created to provide interoperability between blockchains, making transfers of any type of data or asset across blockchains.The cryptocurrency also provides scalability for transactions by spreading them across multiple parallel blockchains.Polkadot’s Substrate framework enables developers to create a custom blockchain in minutes.

The developers behind Polkadot designed it to be upgradeable without hard forks to integrate new features or fix bugs.That enables it to easily adapt to changes and upgrade itself whenever new and improved technologies become available.Polkadot also allows chains to interact with each other in meaningful ways, although the chains remain independent in their governance while being united in their security.

The Polkadot network can transfer data across both public, open, permissionless blockchains and private, permissioned blockchains.This enables developers to build applications that receive permissioned data from a private blockchain and then use it on a public blockchain.

Holders of Polkadot tokens are in complete control of the protocol, and unlike other blockchains, all privileges are given to tokenholders.

Polkadot tokens are available on Binance, Coinbase, KuCoin and other crypto exchanges.

The cryptocurrency has a market cap of almost $27 billion as of the time of this writing.

Polygon The final lesser-known cryptocurrency on this list is related to Polkadot, but instead of uniting virtually any two blockchains, Polygon combines multiple chains that are compatible with Ethereum.Polygon creates a multi-chain Ethereum ecosystem and solves some of the big problems with blockchains, such as slow speeds and high gas fees.However, the cryptocurrency doesn’t sacrifice security while solving these issues.

Unlike Polkadot, Polygon benefits from the network effects of Ethereum and thus is more secure.Ethereum is widely considered as the go-to blockchain for smart contracts, which makes ether a highly desired cryptocurrency and gives Ethereum-compatible blockchains a boost in confidence among users.

The developers behind Polygon also claim it is more open and powerful than Polkadot and other blockchains that unite multiple blockchains into one multi-chain system.

Additionally, Polygon is designed to solve the problems presented by Ethereum, such as low throughput and a poor user experience marked by delays in the finalization of proof of work.Ethereum also lacks sovereignty, which results in shared throughput, clogging risks, a lack of customization on the tech stacks, and governance dependence.

Polygon is available on Binance, Coinbase Pro, FTX and a handful of other crypto exchanges.Its market cap currently stands at more than $17 billion.

Final thoughts There are more than 8,000 different cryptocurrencies as of January 2022, so it can be nearly impossible to know which ones are worth your time and money.Meme coins like Dogecoin may be just a passing fad, but cryptocurrencies with real utility have a strong chance of standing the test of time.

Tue Aug 16 , 2022
As the market makes unpredictable moves, investors have been growing confused and scared of the upcoming price action that their top cryptocurrencies might follow.While there is still major doubt among retail investors, several financial institutions and top organizations have been publicly buying huge amounts of various digital assets. To some point, this has also incentivized… 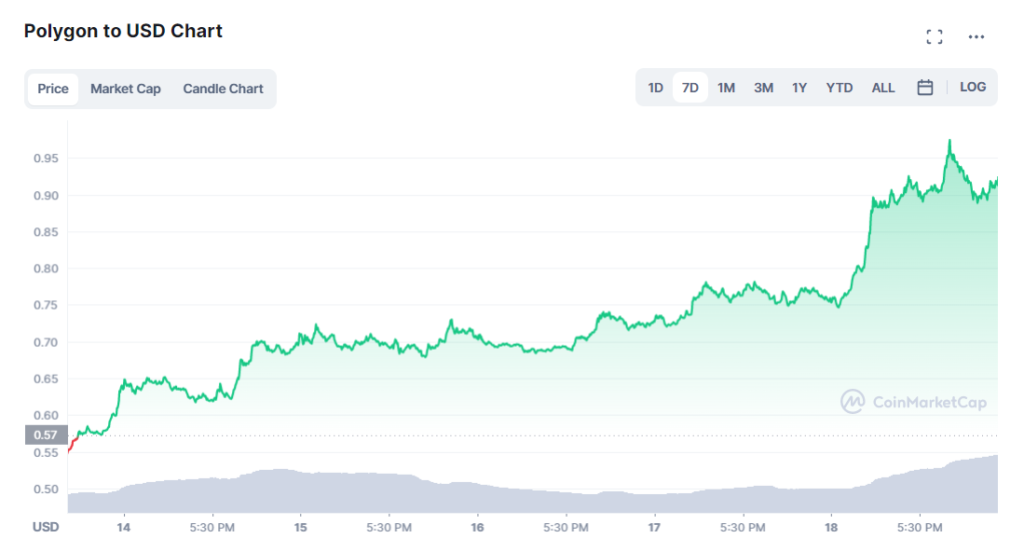