Image Bitcoin 101: What It Is, How to Invest 1:44 The virtual currency bitcoin continues surging to new highs as a frenzy of investors get in on the action. WSJ’s Paul Vigna explains what you need to know, and how to invest should you want to join the mania. Photo: Alexander Hotz/The Wall Street Journal.…

Image Bitcoin 101: What It Is, How to Invest 1:44
The virtual currency bitcoin continues surging to new highs as a frenzy of investors get in on the action. WSJ’s Paul Vigna explains what you need to know, and how to invest should you want to join the mania. Photo: Alexander Hotz/The Wall Street Journal. December 9th 2017 a month ago /display/newscorpaustralia.com/Web/NewsNetwork/Finance – syndicated/ Australia’s banks are facing a Royal Commission into their conduct that will report back by February 2019. Picture: AAP Image/Joel Carrett Source:Supplied NO STATEMENTS, no accounts, no fees, and definitely no waiting for your money to arrive.
That could be your financial future in a world where banks have been replaced by a single, unique “key” which would let you directly transfer and receive money instantly from anywhere in the world.

It’s something central banks from the UK to Israel and Australia are actively assessing as they consider whether to develop their own cryptocurrencies to mirror the benefits of bitcoin, while minimising the ability to launder money or evade taxes.

Head of the Cyber Academy at Edinburgh Napier University, Bill Buchanan said many are now putting their “toe in the water” to investigate how the blockchain technology that underpins bitcoin could improve the financial system by providing instant, secure transactions.
“Governments are worried that they won’t be able to trace transactions of businesses and individuals because it all happens in this digital space,” he told news.com.au about the recent bitcoin boom that has sparked a flurry of investor activity.
“Banks are extremely worried because it’s a completely disruptive force. The transaction is between me and you and doesn’t actually involve any other intermediate party involved in that.” Central banks around the world are watching bitcoin’s success closely but want to create a system that is less prone to money laundering and has more oversight. Picture: AFP/Karen Bleier Source:AFP
Now, the Bank of England is investigating the potential for a cryptocurrency linked to the British pound that would allow people to purchase large assets like property within seconds.

A major report on the subject is due this year, while a previous study with PricewaterhouseCoopers noted a cryptocurrency using a similar blockchain technology could make the financial system more resilient if doubts about security, data storage and scalability are overcome.
The blockchain is essentially a public, encrypted record of all transactions which anyone can make using a public and a private key — rather than using intermediaries as in the current financial system.
Bank of England governor Mark Carney has previously said it could “transform” financial infrastructure and allow for “significant gains” in terms of accuracy and efficiency which could save tens of billions. The blockchain used by bitcoin allows individuals to transfer money direct using a private and public key. However if that private key is stolen or hacked, there is little recourse to get any money back. Picture: Bill Buchanan/Cyber Academy Source:Supplied
The Reserve Bank of Australia (RBA) is also investigating the “pros and cons” of establishing a digital currency. Governor Philip Lowe said in a speech last month that while going into direct competition with retail banks is not something they’re planning to do, the RBA is working to see if a system to “issue Australian dollars in the form of electronic files or tokens” for specialised situations is a good idea.
“The tokens could be exchanged among members of a private, permissioned distributed ledger, separate from the RBA’s Real-time Gross Settlement (RTGS) system, but with mechanisms for the tokens to be exchanged for central bank deposits when required,” he said.

“This seems to be the general model that some people have in mind when they talk about ‘putting AUD on the blockchain’, although other technologies might be able to achieve similar outcomes.” Cash only accounts for around 3.5 per cent of the money in circulation, the RBA claims. It’s also looking into how a bitcoin-style digital currency could work in practice Source:News Corp Australia
BYE BANKS?
So with a $75 million Royal Commission into the banking sector due and cash playing an increasingly small part in the Australian economy, is it time to ditch your bank?
Not quite, said Mr Buchanan, claiming that the fundamental issue is one of trust in a system where there is effectively no recourse if money is stolen.

“This private key is the thing that actually defines you,” he said about the way bitcoin’s blockchain ledger operates.
“So you don’t have a bank account number anymore, sort code, PIN number or a user login for your bank. Basically you have a single encryption key and it’s like having the keys for your house. But if somebody makes a copy of that key they can get into your house and you can’t stop them from getting in there unless you change the locks.”
Instead, he envisages a future in which mobile phones and a “crypto-token” system are used with various retailers to replace cash, with individuals identifying themselves via biometric technology.
“The mobile phone and things like biometrics, fingerprints, scanning and face recognition is a good way forward. A system that involves a financial transaction that includes your fingerprint is a much safer way to transact than something like bitcoin where there are so many risks that you could be personally liable for,” he said.

“What’s more likely to happen in the future is that we’ll buy bitcoin tokens or Amazon tokens and these’ll be crypto-tokens stored by an entity that we trust.

Then we’ll trade in those tokens and they might go up or down and eventually we might cash them in.” The hunt for the Creator of Bitcoin 1:27
Satoshi Nakamoto, the creator of Bitcoin, has been shrouded in mystery ever since he invented the cryptocurrency in 2009. We take a look at the people who have been suspected to be Nakamoto over the years. December 21st 2017.

Fri Jan 5 , 2018
Analysts say the high demand for digital currencies like Bitcoin makes it near inevitable that Australian authorities will be forced to regulate the industry. What is Bitcoin? A digital cryptocurrency It operates on a decentralised peer-to-peer network, with no central authority or government backing They can be bought with fiat currencies like Australian dollars from… 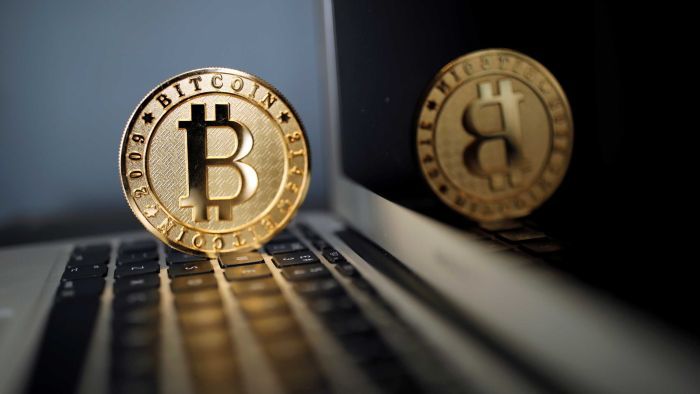