WHAT IS CRYPTOCURRENCY? A digital currency in which encryption techniques are used to regulate the generation of units of currency and verify the transfer of funds, operating independently of a central bank. “decentralized crypto-currencies such as bitcoin now provide an outlet for personal wealth that is beyond restriction and confiscation. HELLO, THERE GUYS! I’ AM…

WHAT IS CRYPTOCURRENCY? A digital currency in which encryption techniques are used to regulate the generation of units of currency and verify the transfer of funds, operating independently of a central bank. “decentralized crypto-currencies such as bitcoin now provide an outlet for personal wealth that is beyond restriction and confiscation. HELLO, THERE GUYS! I’ AM almer
follow me on TWITTER DO YOU WANT ENTER IN THE CRYPTO WORLD? HERE ARE LIST AND TOP CRYPTOCURRENCY IN THE WORLD AS OF NOW 1. BITCOIN (BTC)
Bitcoin is a cryptocurrency and worldwide payment system. It is the first decentralized digital currency, as the system works without a central bank or single administrator.

The network is peer-to-peer and transactions take place between users directly, without an intermediary.

These transactions are verified by network nodes through the use of cryptography and recorded in a public distributed ledger called a blockchain. Bitcoin was invented by an unknown person or group of people under the name Satoshi Nakamoto and released as open-source software in 2009.

Bitcoins are created as a reward for a process known as mining. They can be exchanged for other currencies, products, and services. As of February 2015, over 100,000 merchants and vendors accepted bitcoin as payment. Research produced by the University of Cambridge estimates that in 2017, there are 2.9 to 5.8 million unique users using a cryptocurrency wallet, most of them using bitcoin. Learn more about bitcoin 2. ETHERIUM (ETH)
Ethereum is an open-source, public, blockchain-based distributed computing platform and operating system featuring smart contract (scripting) functionality.

It supports a modified version of Nakamoto consensus via transaction based state transitions. In popular discourse, the term Ethereum is often used interchangeably with Ether to refer to the cryptocurrency that is generated on the Ethereum platform. Ether is a cryptocurrency whose blockchain is generated by the Ethereum platform. Ether can be transferred between accounts and used to compensate participant mining nodes for computations performed.

Ethereum provides a decentralized Turing-complete virtual machine, the Ethereum Virtual Machine (EVM), which can execute scripts using an international network of public nodes. “Gas”, an internal transaction pricing mechanism, is used to mitigate spam and allocate resources on the network. Ethereum was proposed in late 2013 by Vitalik Buterin, a cryptocurrency researcher and programmer. Development was funded by an online crowdsale that took place between July and August 2014.

The system went live on 30 July 2015, with 11.9 million coins “premined” for the crowdsale. This accounts for approximately 13 percent of the total circulating supply. Learn more about ETH .

” It supports tokens representing fiat currency, cryptocurrency, commodity or any other unit of value such as frequent flier miles or mobile minutes.At its core, Ripple is based on a shared and public database or ledger, which uses a consensus process that allows for payments, exchanges, and remittance in a distributed process. Used by companies such as UniCredit, UBS, and Santander, Ripple has been increasingly adopted by banks and payment networks as settlement infrastructure technology, with American Banker explaining that “from banks’ perspective, distributed ledgers like the Ripple system have a number of advantages over cryptocurrencies like bitcoin.

” More about Ripple
4. BITCOIN CASH (BCH)
Bitcoin Cash is a cryptocurrency. It is a result of a prolonged disagreement on how to handle the bitcoin scalability problem. A group of people not content with the Segregated Witness bitcoin rule change decided to increase bitcoin transaction capacity eight times. The change took effect on 1 August 2017.

The change is incompatible with the existing bitcoin rules, which is why it is called a hard fork. As a result, the bitcoin ledger called the blockchain and the cryptocurrency split in two. Site Link
5. LITECOIN (LTC)
Litecoin (LTC or Ł) is a peer-to-peer cryptocurrency and open source software project released under the MIT/X11 license.Creation and transfer of coins is based on an open source cryptographic protocol and is not managed by any central authority.

The coin was inspired by, and in technical details is nearly identical to, Bitcoin (BTC). Litecoin was released via an open-source client on GitHub on October 7, 2011, by Charlie Lee, a former Google employee. The Litecoin network went live on October 13, 2011.

It was a fork of the Bitcoin Core client, differing primarily by having a decreased block generation time (2.5 minutes), increased maximum number of coins, a different hashing algorithm (scrypt, instead of SHA-256), and a slightly modified GUI. More….
6. CARDANO (ADA)
Cardano is a technology platform that runs the Ada cryptocurrency. Daedalus is the cryptocurrency wallet that holds Ada. It was created by blockchain development firm Input Output Hong Kong (IOHK) and led by Charles Hoskinson, former co-founder of BitShares and Ethereum, and aims to run smart contracts, decentralized applications, side chains, multi-party computation, and metadata. Cardano develops their currency around a Recursive InterNetwork Architecture (RINA).

It uses the Ouroboros proof of stake algorithm to achieve decentralized consensus in its network. In this protocol, slot leaders generate new blocks in the blockchain and verify the transactions. Anyone holding a Cardano ADA coin can become a slot leader. Cardano uses Haskell, a programming language with a high degree of fault tolerance. Learn more here

7. NEO
NEO is a non-profit community-based blockchain project that utilizes blockchain technology and digital identity to digitize assets, to automate the management of digital assets using smart contracts, and to realize a “smart economy” with a distributed network. NEO was founded in 2014 and was real-time open source on GitHub in June 2015.

Since its inception, the NEO team has experienced the upsurge and boom of the blockchain industry and the frenzy and cooling of the digital money market.

We believe technology drives progress and together we can create the future. Motivated by this, NEO has been created to shift our traditional economy into the new era of the “Smart Economy”.

more about NEO
8. STELLAR (XLM)
Stellar is an open-source protocol for value exchange founded in early 2014 by Jed McCaleb (creator of eDonkey) and Joyce Kim. Its board members and advisory board members include Keith Rabois, Patrick Collison, Matt Mullenweg, Greg Stein, Joi Ito, Sam Altman, Naval Ravikant and others. The Stellar protocol is supported by a nonprofit, the Stellar Development Foundation.

Stellar is an open-source protocol for exchanging money.Servers run a software implementation of the protocol, and use the Internet to connect to and communicate with other Stellar servers, forming a global value exchange network.

Each server stores a record of all “accounts” on the network. These records are stored in a database called the “ledger”. Servers propose changes to the ledger by proposing “transactions”, which move accounts from one state to another by spending the account’s balance or changing a property of the account. All of the servers come to an agreement on which set of transactions to apply to the current ledger through a process called “consensus”. The consensus process happens at a regular interval, typically every 2 to 4 seconds. This keeps each server’s copy of the ledger in sync and identical. WEBSITE
9. MONERO (XMR)
Monero (XMR) is an open-source cryptocurrency created in April 2014 that focuses on privacy and decentralization that runs on Windows, macOS, Linux, Android, and FreeBSD.

Monero uses a public ledger to record transactions while new units are created through a process called mining. Monero aims to improve on existing cryptocurrency design by obscuring sender, recipient and amount of every transaction made as well as making the mining process more egalitarian. The focus on privacy has attracted illicit use by people interested in evading law enforcement. The egalitarian mining process made it viable to distribute the mining effort opening new funding avenues for both legitimate online publishers and malicious hackers who covertly embed mining code into websites and apps.

Connect now
10. EOS
EOS is a blockchain platform for the development of decentralized applications (apps), similar to Ethereum in function. It makes app development easy by providing an operating-system-like set of services and functions that apps can make use of. The idea behind EOS is to bring together the best features and promises of the various smart contract technologies out there (e.g. security of Bitcoin, computing support of Ethereum) in one simple to use, massively scalable applications platform for the everyday user to empower the impending blockchain economy.

IOTA (IoT)
IOTA is a public distributed ledger that stores transactions in a directed acyclic graph (DAG) structure, called a Tangle. The Tangle is used in place of the blockchain structure commonly used by other cryptocurrencies, such as Bitcoin. IOTA is a cryptocurrency designed specifically for the Internet of Things (IoT)that can be used for the secure sale and sharing of data streams. Learn More. 12. DASH
Dash (formerly known as Darkcoin and XCoin) is an open source peer-to-peer cryptocurrency. On top of Bitcoin’s feature set, it currently offers instant transactions (InstantSend)] private transactions (PrivateSend) and operates a self-governing and self-funding model that enables the Dash network to pay individuals and businesses to perform work that adds value to the network.

Dash’s decentralized governance and budgeting system makes it a decentralized autonomous organization (DAO). More info here.
13. NEM (XEM)
NEM is a peer-to-peer cryptocurrency and blockchain platform launched on March 31, 2015.Written in Java, with a C++ version in the works, NEM has a stated goal of a wide distribution model and has introduced new features to blockchain technology such as its proof-of-importance (POI) algorithm, multisignature accounts, encrypted messaging, and an Eigentrust++ reputation system. The NEM blockchain software is used in a commercial blockchain called Mijin, which is being tested by financial institutions and private companies in Japan and internationally.

MORE..
14. TRON (TRX)
TRON is a decentralized open-source cryptocurrency that was founded by TRON Foundation. TRON is an application intended to allow content creators to be compensated for sharing their content.

TRON incorporates a blockchain based peer-to-peer technology which basically means that like other cryptocurrencies, it is capable of eliminating the middleman. From another aspect, TRON’s technology is a distributed storage facility that allows its users to access entertainment content from every part around the world without seeking assistance from GooglePlay Store or Apple Store. As a result, the content producers are able to receive funds directly from the consumers quickly.
15.

The classic ether token is traded on cryptocurrency exchanges under the ticker symbol ETC. Gas, an internal transaction pricing mechanism, is used to prevent spam on the network and allocate resources proportionally to the incentive offered by the request. Learn more here.
.

Bitcoin millionaires are buying Lamborghinis as a status symbol of crypto wealth, and the carmaker says sales are rocketing

Mon Apr 2 , 2018
Crypto millionaires love their Lamborghinis. Lamborghini Bitcoin (and other cryptocurrency) millionaires are buying Lamborghinis as the ultimate status symbol in their community. People who made riches in bitcoin and ether have bought the Italian supercar for as little as $135, because they invested in crypto before its value spiked. At the same time, Lamborghini reported… 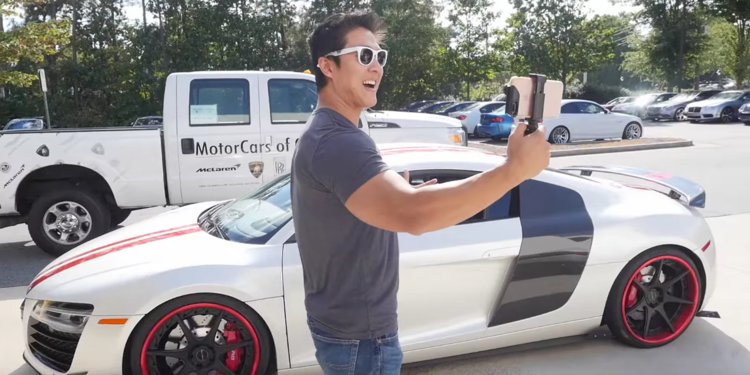