Enlarge / Mark Zuckerberg.Getty Images | Drew Angerer Meta is laying off 11,000 employees, about 13 percent of its workforce, CEO Mark Zuckerberg wrote in a message to staff today.Zuckerberg said his previous decision to increase spending didn’t pay off as he thought it would and that Meta’s “revenue outlook is lower than we expected… 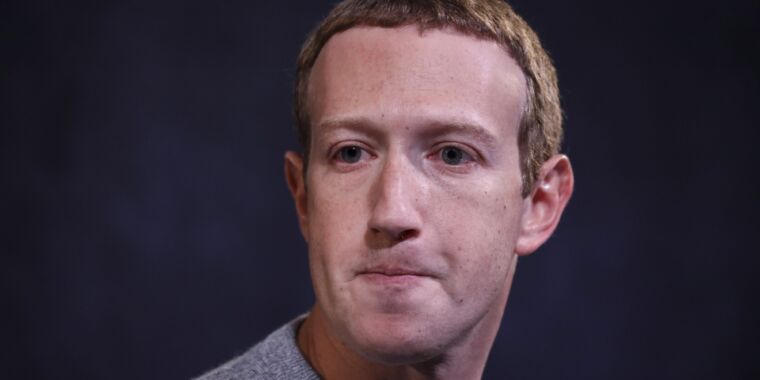 Enlarge / Mark Zuckerberg.Getty Images | Drew Angerer Meta is laying off 11,000 employees, about 13 percent of its workforce, CEO Mark Zuckerberg wrote in a message to staff today.Zuckerberg said his previous decision to increase spending didn’t pay off as he thought it would and that Meta’s “revenue outlook is lower than we expected at the beginning of this year.”

“At the start of Covid, the world rapidly moved online and the surge of e-commerce led to outsized revenue growth.Many people predicted this would be a permanent acceleration that would continue even after the pandemic ended,” Zuckerberg wrote.”I did too, so I made the decision to significantly increase our investments.Unfortunately, this did not play out the way I expected.

Not only has online commerce returned to prior trends, but the macroeconomic downturn, increased competition, and ads signal loss have caused our revenue to be much lower than I’d expected.I got this wrong, and I take responsibility for that.”

The company formerly known as Facebook already “cut costs across our business, including scaling back budgets, reducing perks, and shrinking our real estate footprint,” Zuckerberg wrote.

Meta is also “restructuring teams to increase our efficiency” and “cutting discretionary spending and extending our hiring freeze through Q1,” but “these measures alone won’t bring our expenses in line with our revenue growth,” he wrote.

Advertisement Employees losing their jobs are being notified today.”We made the decision to remove access to most Meta systems for people leaving today given the amount of access to sensitive information.But we’re keeping email addresses active throughout the day so everyone can say farewell,” Zuckerberg wrote.

We’ve shifted more of our resources onto a smaller number of high priority growth areas—like our AI discovery engine, our ads and business platforms, and our long-term vision for the metaverse,” he wrote.

Zuckerberg reportedly met with “hundreds of executives” about the layoffs yesterday.”Mr.

Zuckerberg appeared downcast in Tuesday’s meeting and said he was accountable for the company’s missteps, and that his over-optimism about growth had led to overstaffing, according to people familiar with the meeting,” The Wall Street Journal reported .

In the US, laid-off workers’ severance will be 16 weeks of base pay plus two weeks for each year at the company.

Workers will also get six months of health insurance and payment for all remaining vacation time.

Severance will be similar in other countries, but there will be “separate processes that take into account local employment laws,” Zuckerberg’s memo to staff said.

While layoffs will affect every part of the company, “Recruiting will be disproportionately affected since we’re planning to hire fewer people next year.We’re also restructuring our business teams more substantially,” Zuckerberg wrote.

In third-quarter earnings announced October 26, Meta said its revenue of $27.71 billion was a 4 percent year-over-year decrease—though revenue would have increased 2 percent if foreign exchange rates had remained constant.”Total costs and expenses were $22.05 billion, an increase of 19 percent year-over-year,” Meta said.Meta’s quarterly net income was $4.4 billion, down from $9.2 billion in Q3 2021.

Meta stock rose more than 7 percent this morning but is still down nearly 70 percent in 2022..

Sat Nov 12 , 2022
[Guest Post] $SHIB & $UNI Blasted by Toon Finance Coin Protocol In the world of decentralized finance and meme coins we should all know what a swap platform is also known as a decentralized exchange platform and if you are not familiar with one then stick around during this read and we will teach you…