More Americans getting vaccinated following full FDA approval of Pfizer COVID vaccine An ABC analysis found that the number of first doses administered has increased. By Arielle Mitropoulos August 31, 2021, 8:40 PM • 7 4:01 How COVID-19 vaccines work A visual explainer on how vaccines work, including how they work with the body’s immune… 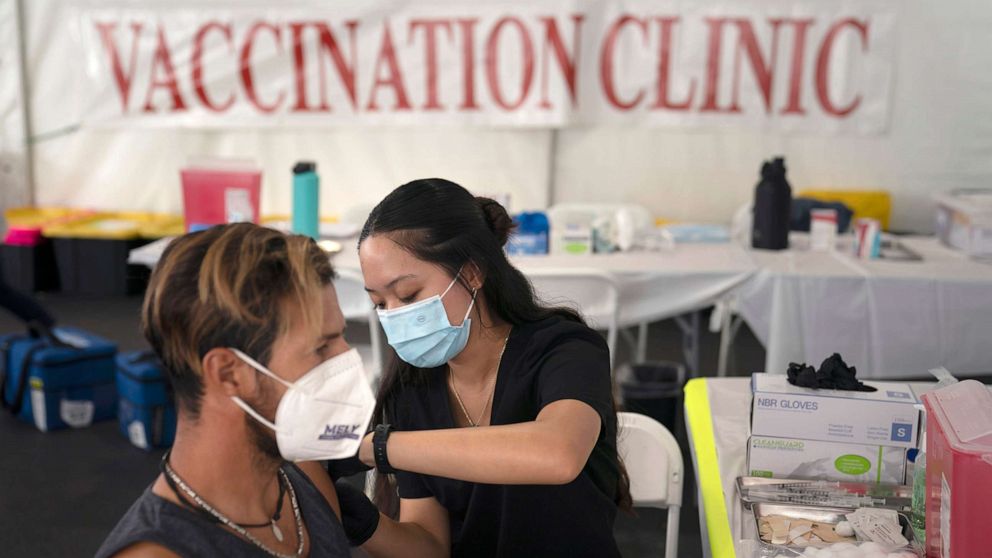 A visual explainer on how vaccines work, including how they work with the body’s immune system and their use in preventing coronavirus.Jae C.Hong/AP Thousands of Americans were finally persuaded to get their first shot in the week following the Food and Drug Administration’s full approval of the Pfizer-BioNtech coronavirus vaccine, new data reveals.

A new ABC News analysis found that initial data, stemming from the last seven days, indicates that since the FDA’s announcement of the approval, the U.S.has indeed seen a slight uptick in the average number of Americans getting their first COVID-19 vaccine dose.

Just prior to the announcement, the U.S.

rate of first doses had stagnated.Although the country experienced an increase in people initiating vaccination in July as new coronavirus cases surged across the country, the average number of Americans getting their first dose had then declined.

However, following Pfizer’s full approval, the U.S.saw a 17% increase in the number of Americans getting vaccinated with their first dose.

30, 2021.”As expected, full approval was enough to convince at least some to finally get immunized,” said Dr.John Brownstein, an epidemiologist at Boston Children’s Hospital and an ABC News contributor.

Although there does not appear to have been a mad rush of people getting vaccinated in the days immediately following approval, the uptick was significant enough to shift the country’s vaccination trend upward.

“While surveys initially had estimated a far greater segment of the population who pegged full approval as their reason for holding off, we have yet to see a large wave of newly convinced people to roll up their sleeves,” Brownstein added.

MORE: 5 GOP-led states’ indoor mask bans face federal civil rights investigations Experts caution that although the uptick is encouraging, there is still much work to do in convincing millions more hesitant Americans to get the shot.

However, according to a newly released Axios-Ipsos poll , vaccine hesitancy among Americans has hit a record low, with only 2 in 10 Americans saying they are unlikely to get the COVID-19 vaccine, and 14% saying they are not likely at all.

Hong/AP Registered nurse, Noleen Nobleza inoculates Julio Quinones with the COVID-19 vaccine at a clinic set up in a parking lot, Aug.28, 2021, in Orange, Calif.In another move that officials hope will encourage Americans to get the shot, the Advisory Committee on Immunization Practices, the Centers for Disease Control and Prevention independent advisory panel, took the approval a step further on Monday, unanimously endorsing Pfizer’s vaccine for use in people 16 years of age and older

“We now have a fully approved COVID-19 vaccine and ACIP has added its recommendation.If you have been waiting for this approval before getting the vaccine, now is the time to get vaccinated and join the more than 173 million Americans who are already fully vaccinated,” CDC Director Dr.

It is difficult to know for sure if this increasing trend will continue.On Tuesday, for example, the U.S.reported a single-day total of approximately 283,000 first shots administered, well below the current seven-day average.

MORE: US now approaching January’s hospitalization peak “While FDA approval has many positive implications for the vaccine rollout, this is not a replacement for the constant need for basic education on the individual and community benefits of immunization,” Brownstein said.

Full approval has rendered it easier for employers to mandate vaccines , which could also be one of the drivers of rising vaccination rates, experts have suggested.In the last week alone, an increasing number of companies and government entities have moved to require proof of vaccination or risk termination.

Just hours after the full approval was announced, for example, the Pentagon announced that they would begin preparations to make the vaccine mandatory.

“I’m calling on more companies in the private sector to step up with vaccine requirements that will reach millions more people,” President Joe Biden said in remarks at the White House last week.”If you’re a business leader, a nonprofit leader, a state or local leader, who has been waiting for full FDA approval to require vaccinations, I call on you now to do that — require it.

It only makes sense to require a vaccine to stop the spread of COVID-19.”

MORE: Health officials sticking with 8-month COVID booster shot timeline: Fauci The push for more companies to require employees get vaccinated comes as the U.S.continues to struggle through its latest surge in COVID-19 infections.

“With only 53% of the population fully vaccinated, we are going to need a much more significant increase in vaccinations if we are going to limit the impact of a fall surge and get to the other side of this pandemic,” Brownstein said..

Trump Reveals His Master Plan for Afghanistan: We Should’ve ‘Let It Rot’

Thu Sep 2 , 2021
Donald Trump has had a lot to say about how Joe Biden has mishandled the withdrawal from Afghanistan—but, when given the chance to explain what he would have done differently, Trump’s master plan boiled down to leaving the country in smouldering ruins before leaving it forever. The ex-president appeared on Fox Business on Tuesday morning… 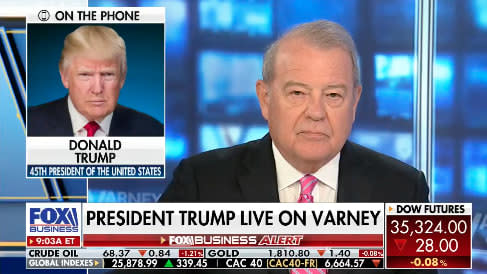