All the big unknowns surrounding the rapid jump in inflation – including how high consumer prices will go and how quickly the Fed will raise interest rates – have put the mortgage market on high alert in early 2022.”Rates have gone up rather quickly and there’s still a little upward movement going on,” said Keith…

All the big unknowns surrounding the rapid jump in inflation – including how high consumer prices will go and how quickly the Fed will raise interest rates – have put the mortgage market on high alert in early 2022.”Rates have gone up rather quickly and there’s still a little upward movement going on,” said Keith Gumbinger, vice president at the mortgage lending information site HSH.com.The 30-year fixed mortgage rate has gone up abruptly in January on concerns that the Federal Reserve could end up raising rates up to four times in 2022, instead of maybe two or three times.The average 30-year rate was 3.08% back in mid-November last year but had shot up to 3.54% by last week, based on Freddie Mac data, according to Gumbinger.And rates have been trending higher the week of Jan.

17.The speed is somewhat startling, but so, too, was the uptick in inflation last year.

Gumbinger blames the rapid mortgage rate hikes on the lack of clarity, as well as the lack of experience among today’s bond market investors.

“Many investors in today’s markets really have not lived through a spate of inflation like this,” Gumbinger said.The consumer price index jumped by 7% in December for the country from a year ago – reaching a nearly 40-year high.

It was the largest 12-month spike since June 1982.The regional CPI rose to 7.5% in December from a year ago in the Midwest, including Michigan.That was the highest spike for all regions of the country.► The Daily Money: Get our latest personal finance and consumer news in your inbox We’re dealing with an economy that’s had to evolve after the COVID-19 pandemic disrupted supply chains, manufacturing, travel and entertainment and other activity for nearly two years.Earlier commentary by the Fed that inflation could be relatively temporary now appears to be wrong, which is driving up concern that the Fed may need to move more aggressively than expected initially.All eyes will be on the Fed, which is holding its next policy meeting Tuesday and Wednesday.

Most economists do not expect the Fed to raise rates in January, but investors will be carefully studying what comments are made and looking for any clues on where the Fed is heading when it comes to putting a lid on inflation.The first rate hike could come as soon as the Fed meeting scheduled for March 15 and March 16.► Existing home sales fall: December marked first drop in four months: Inventory at 20 year-low As might be expected, many borrowers are moving to lock in rates now on the expectation that mortgage rates could climb higher, according to Alex Elezaj, chief strategy officer at Pontiac-based United Wholesale Mortgage.”The market is changing very fast,” Elezaj said.

While refinancing has slowed down in general for the industry, he said, there continues to be a strong demand from many homeowners who continue to refinance in order to take cash out of their homes as home values have gone up.Some people want that cash now because they’re remodeling their homes or paying down other higher-cost debt, he said.The available homes for sale remain limited in many markets, he said, giving homeowners more reason to remodel their existing home and not move elsewhere.► ‘Spending more and getting less’: How the pandemic, inflation take a financial toll on families “I think people will continue to tap into the equity,” he said.

As for home buyers, Elezaj said, 30-year mortgage rates continue to be available now in the low 3% to mid-3% range for those who qualify and shop around.”We do see it trending upward, for sure,” he said.The expectation is that mortgage rates would see a bigger increase in the summer and later this year.Working with a local independent mortgage broker, he said, can help people shop around and discover options for first-time homebuyers, veterans and others.

UWM powers a website called FindAMortgageBroker.com.Studying what’s available by just reviewing rates on the internet may not be enough.

“You’re not buying a plane ticket saying ‘Give me the best rate from Detroit to Fort Lauderdale’ ” he said.”You just Google it, good luck.” Elezaj expects that the Fed could raise short-term rates three or four times this year, giving homebuyers more reason to do their homework to save money.

As much as people may be shocked by the recent mortgage rate hikes, rates still aren’t anywhere close to historically high levels or even what we’ve seen just a few years ago.The average 30-year rate was 4% nearly three years ago back in May 2019, according to Gumbinger at HSH.com.But the last time borrowers saw 30-year rates routinely in the 5% range was 2011.If you go back to January 1982, when inflation was hot, the average 30-year fixed rate was more than 18%, he said.

Amazingly, he said, the low point during the pandemic was back in January 2021 when the average 30-year rate hit 2.65%.”The lowest mortgage rates come in the worst economic climates,” Gumbinger said.Gumbinger said he does not expect rates to shoot up to 4% and stay there in 2022.Instead, he’s expecting that the 30-year rate could peak at around 3.75% or 3.8% this year.

But he was surprised by the rapid climb so far.If inflation cools off, mortgage rates could trend somewhat lower, too.

It pays to put your possible payment in perspective, if you’re looking to buy a home.Take, for example, someone who plans to take on a $200,000 mortgage.At 2.65% for a 30-year fixed rate mortgage, the average payment would be – excluding property taxes and private mortgage insurance – around $806 a month.That would add up to nearly $90,134 in total interest over the life of the loan.Go to 3.65% and the monthly payment would increase by nearly $109 a month to a payment of about $915 a month, again just covering the principal and interest cost.The total interest would be nearly $129,371 over the life of the loan.

Jump all the way up to 5% for that 30-year fixed rate and the payment would be nearly $1,074 a month.That adds up to around $186,513 in total interest over the life of the loan.If you’re shopping for a home in 2022, a fixed mortgage rate could very well be a better option for many buyers than an adjustable rate product.Even though rates are trending upward, a fixed rate that’s around 3.5% to 4% remains a good deal historically.Shoppers can get a lower rate by opting for an adjustable rate mortgage but experts say it’s best to move cautiously there.When it comes to ARMs, it’s time to “stay away,” said Greg McBride, chief financial analyst for Bankrate.com.

“Fixed mortgage rates are still well below 4% and you won’t save that much with an ARM but will put yourself at considerable risk in future years if we end up being in a higher rate environment,” McBride said.The concern is that rates will edge up further in the next few years since we’ve been chugging along at some incredible lows.The average 30-year mortgage rate was 3.73% on Jan.19, with 0.74 points, according to the mortgage loan website HSH.com.One point is a 1% fee on the loan amount – or $1,000 on a $100,000 mortgage.By paying points, borrowers can obtain a lower mortgage rate and possibly pay less in interest over time if they hold onto that loan for a long period of time.

A hybrid 5/1 ARM, which is fixed for the first five years and adjusts each year after that, has an average rate of 2.73% with 0.66 points, according to HSH.com.The 30-year fixed rate is predominantly used by borrowers and has been for many years.Gumbinger said ARMs can still make sense for some if they know they’re going to move in five or six years, such as a young homebuyer or even someone planning to relocate in a few years for retirement.Consumers, though, need to be prepared and set savings on the side if rates do shoot up and the homeowner is unable to move in that expected time frame.

Many times first-time homebuyers opt for an adjustable rate mortgage to obtain the lowest monthly payment possible.But they could end up buying more house than they can afford – and put themselves at much greater risk for paying higher rates in the future as interest rates rise.”A fixed rate mortgage is your best gauge of affordability.Don’t use an ARM as a crutch of affordability,” McBride said.Another key warning: Many new ARM products on the market have an ability to adjust payments every six months, rather than just once a year.As rates climb higher, McBride said, you’re going to be hit with higher payments more quickly and more frequently.

Annual and lifetime caps still apply.It’s possible, McBride said, that mortgage rates, which are surging now, ultimately retreat late in 2022 if concerns about an economic slowdown come into play.”The 30-year fixed mortgage could hit 4%,” McBride said, “but it will come back down later this year to around 3.5%.The key is the Fed getting inflation under control.” And that is the key question: How well will the Fed do when it comes to keeping inflation under control? Contact Susan Tompor: [email protected] .Follow her on Twitter @ tompor .To subscribe, please go to freep.com/specialoffer.

R ead more on business and sign up for our business newsletter ..

The Supreme Court supported compulsory vaccinations in 1905. What changed in 2022?

Mon Jan 24 , 2022
When reports first trickled out that Justice Neil Gorsuch refused to wear a mask in the courtroom, and that as a result his fellow Supreme Court judge Sonia Sotomayor needed to work through Zoom as a result, the backlash was swift and unsurprising.No doubt with an eye toward protecting its reputation as an august body… 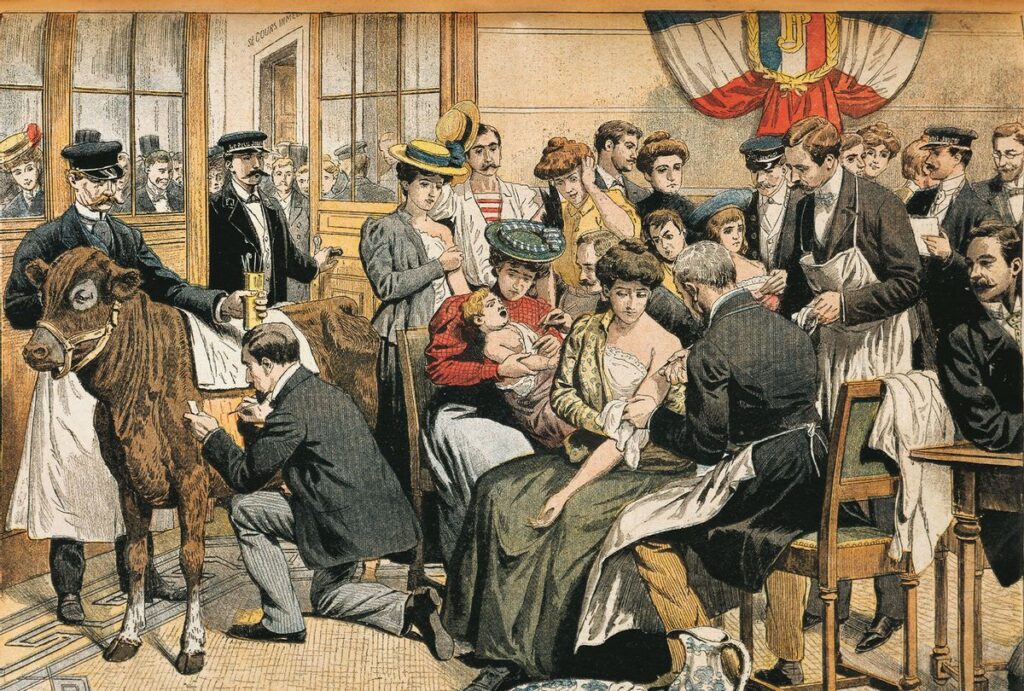