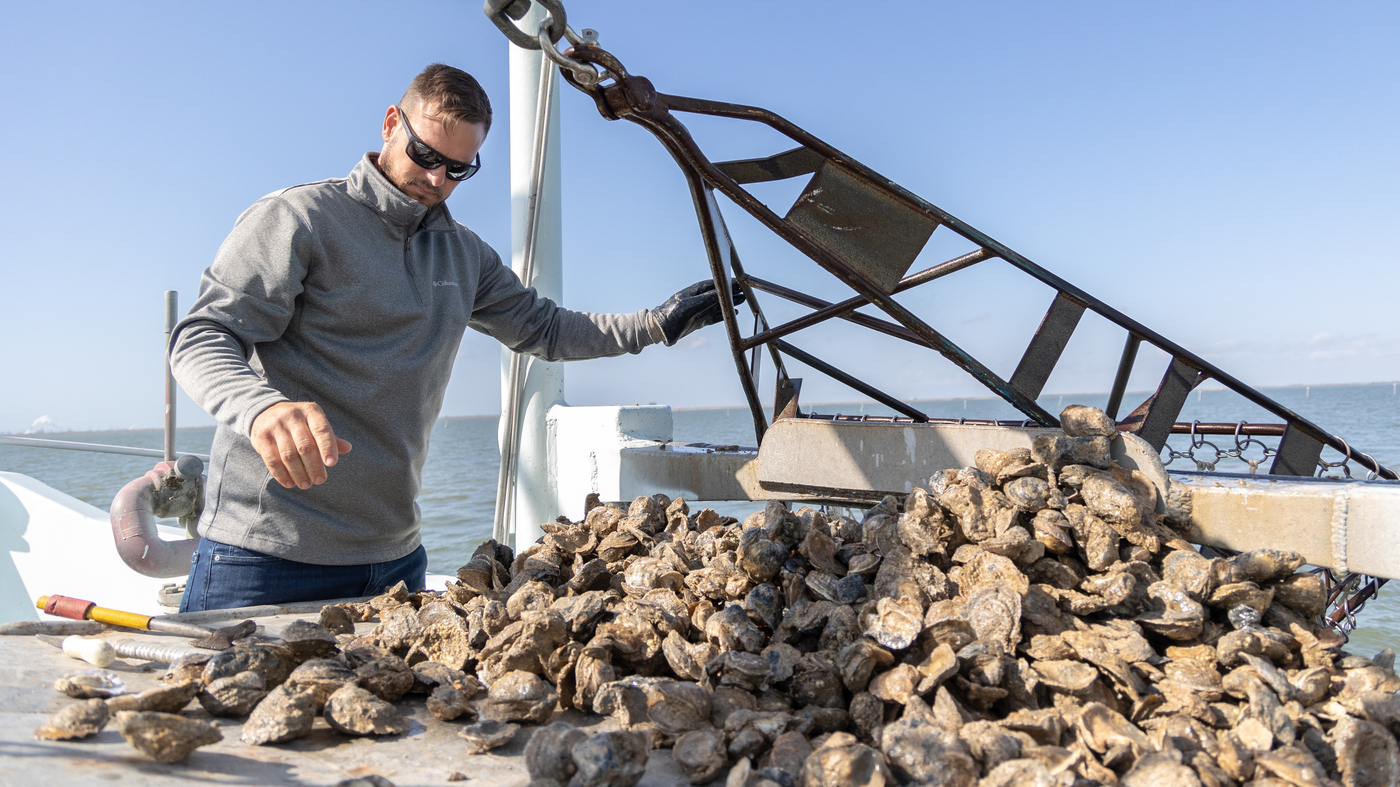 Lucio Vasquez/Houston Public Media At Johny Jurisich’s family dock in Texas City, more than a dozen empty oyster boats with names like Sunshine and Captain Fox lazily float in the marina on a recent Monday morning – an odd sight for what is normally peak oyster harvesting season.

“On a Monday morning, this beautiful weather, they would all be out there (in the bay).This would be an empty marina,” says Jurisich, whose family owns the wholesale company US Sea Products and has worked in the oyster business for generations.

Nearby at Misho’s Oyster Company in San Leon, mariachi music blares into an empty shucking room, the conveyor belts at a standstill.Just a few dozen oyster sacks line what would normally be a full freezer room.

1 through April 30, but many of the areas have been closed since mid-December – a move the state says is necessary for future sustainability.

But those in the oyster business worry about the sustainability of their industry and livelihoods — and it’s set up a clash between state officials and oyster harvesters over how the resource should be managed.

“We’re not making any money” “It’s taken a big toll on me actually,” Jurisich says.”I started this right out of high school.

Alex Gutierrez, who owns a few oyster boats and has worked as an oyster fisherman for 35 years, says he usually hires between 10-15 people to work with him each season.But recently he’s been dipping into his savings and doesn’t think he’ll be able to afford the annual maintenance on his boats.

“There’s just no money to spend on the boats, we’re not making any money,” he says.”And you don’t want to spend the little savings that you might have and then have empty pockets.”

The Gulf Coast region produces 45% of the nation’s $250 million oyster industry, according to NOAA fisheries .In Texas, the industry contributes an estimated $50 million to the state economy.

The Texas Parks & Wildlife Department decides when to close areas for harvesting using a traffic-light system that went into effect in 2015.If samples taken by state biologists come back with too many small oysters or too few oysters in general the agency closes the area.

He keeps those over 3 inches and puts the smaller ones back into the water.Lucio Vasquez/Houston Public Media hide caption

Johny Jurisich measures a freshly harvested oyster.He keeps those over 3 inches and puts the smaller ones back into the water.

Lucio Vasquez/Houston Public Media Oysters prevent shoreline erosion, closing the harvesting areas are necessary to give them time to repopulate Jurisich and others from the industry disagree with how the state takes the samples and also with the system itself.They say by closing some bays, it forces all of the boats into just a few areas, inevitably overwhelming those reefs as well.

“We feel that it’s been somewhat abused, and just mishandled and the data is skewed,” Jurisich says.

“It forces too many boats in small areas, and then upsets the recreational fishermen.”

Christopher Steffen, a natural resource specialist with Texas Parks & Wildlife, says the agency takes samples based on where harvesting happens.

“If an area’s being fished quite a bit and there’s a lot of fishing pressure, then we’ll go back out and resample that area,” he says.”If it’s below the threshold, then that area can close in response to the decreased number of oysters.”

Steffen says the closures are necessary to give oysters time to repopulate.Oysters prevent shoreline erosion and help filter the water, but unlike fish, they can’t swim away to escape poor conditions.

While it’s unusual to have so many closures, Steffen says it’s also in line with the trends the agency has been seeing in oyster populations.

That’s because Texas oysters have been having a rough decade, enduring hurricanes, flood events, and drought, says Jennifer Pollack with the Harte Research Institute.

National Florida Closes Iconic Apalachicola Oyster Fishery Across the Gulf Coast region about 50-85% of the original oyster reefs have disappeared “Oyster reefs really just aren’t able to recover from the things that we see happening to them,” Pollack says.

Across the Gulf Coast region, an estimated 50-85% of the original oyster reefs have disappeared, according to a report by the Nature Conservancy .They’ve been hit with hurricanes, flood events, droughts and the BP oil spill.

In Galveston, Hurricane Ike in 2008 was particularly devastating, destroying more than 6,000 acres of oyster habitat there, according to TPWD .

” We have all these disturbances that knock the reefs back, we have harvesting that continues, that probably keeps them at maybe a lower abundance level of oysters in the bay,” Pollack says.”They just can never climb back out so they’re a little bit less resilient next time something happens.”

A lot of these conditions – droughts, heavier rainfall – are only expected to be exacerbated by climate change .

Beyond the temporary closures, Texas Parks & Wildlife is also studying the permanent closure of three bays.

Oyster fishermen like Antonio Ayala worry that would push the industry even closer to the brink.

“They’re punishing us, instead of helping us,” Ayala says in Spanish.

Like oysterman Alex Gutierrez, Ayala says he’s also had to dip into his savings just to pay the bills.

He’s thought about getting another job, but after 30 years harvesting oysters, this is all he knows.

“Nobody wants to hire an old man,” he says..

Sun May 1 , 2022
Donald Trump will remain in contempt of court for stymying NY Attorney General Letitia James' probe of his business, a judge ruled.Trump is being fined $10K a day for failing to comply with the AG's subpoena for his personal business documents.The judge has repeatedly questioned why Trump hasn't sworn a statement detailing where he had…