A South Korean TV network has apologized after using inappropriate images and captions to describe countries during the Tokyo 2020 opening ceremony on Friday.The broadcaster, MBC, used an image of the site of the 1986 Chernobyl nuclear disaster to depict Ukraine, Count Dracula for Romania, an upheaval for Haiti, and a map showing Wuhan for… 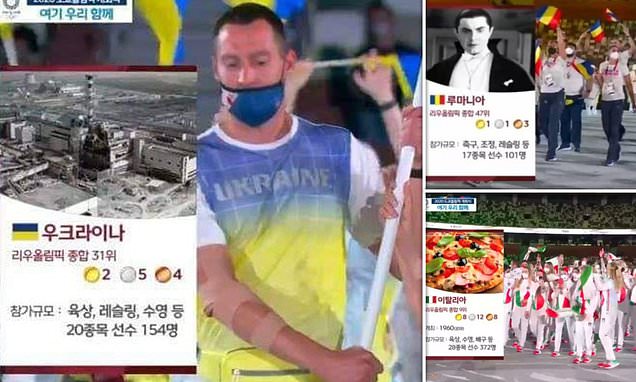 A South Korean TV network has apologized after using inappropriate images and captions to describe countries during the Tokyo 2020 opening ceremony on Friday.The broadcaster, MBC, used an image of the site of the 1986 Chernobyl nuclear disaster to depict Ukraine, Count Dracula for Romania, an upheaval for Haiti, and a map showing Wuhan for China , when athletes from those countries entered the stadium for the opening ceremony.The channel also made some more light hearted choices, opting for a picture of pizza to describe Italy , sushi for Japan , tacos to depict Mexico , and salmon for Norway.In its captions broadcasting the ceremony, the network referred to the Marshall Islands as ‘once a nuclear test site for the United States,’ and Syria as the country that has ‘a civil war going on for 10 years.’ While the commentator told viewers ‘the political situation is unstable due to the assassination of the president’, as athletes from Haiti entered the stadium.Team GB was depicted with pictures of the Queen, Tower Bridge, and Buckingham Palace with a voiceover telling viewers the country needed no further introduction as Koreans are already familiar with Shakespeare, The Beatles, and Harry Potter.El Salvador was depicted with a picture of Bitcoin, referring to the decision to adopt the cryptocurrency as legal tender – the first country to do so – in June.

MBC opted for map showing the location of Wuhan, where the Covid-19 pandemic started.

Ireland was depicted with a crowd of people, several dressed in leprechaun or St Patrick’s Day outfits, and underneath, MBC described the country as ‘whisky, beer, and natural scenery’.Argentina was depicted with a picture of Lionel Messi – who is not playing in the Games.A Portuguese custard tart represented athletes from Portugal and an image of Baseball player Xander Bogaerts depicted Aruba Thailand and South Korea’s own athletes were ushered into the stadium with only a map pinpointing their country.In a bizarre pandemic add on, MBC also shared the vaccination rates for some states.It also reported the size of the country relative to the Korean peninsula, the GDP, and population.The surprising depictions were posted on Twitter by freelance journalist Raphael Rashid, forcing the broadcaster to apologise.’Inappropriate images and captions were used to introduce some stories.

We apologized to those countries including Ukraine and our viewers’, MBC said in a statement.’Furthermore, we will fundamentally reexamine the production system of sports programs to avoid any similar accidents in the future’.

It is not the first time MBC have got in trouble for risqué broadcasting.The channel was fined for its coverage of the2008 Beijing Olympics opening ceremony after it referred to Zimbabwe as ‘a country with deadly inflation’ and described Sudan as an unstable country with a local civil war.

Tokyo’s opening ceremony shorn of glitz and overshadowed by a pandemic but defined by hope, tradition and gestures of diversity.The ceremony was at times sombre – including a moment of silence for Covid victims – and held on a much smaller scale than previous years, but still packed a number of show-stoppers, including the formation of a giant floating globe made out of drones hovering over the stadium.

There were just 950 guests in the 68,000-capacity arena due to virus restrictions with US First Lady Jill Biden and French President Emmanuel Macron joined by Japanese Emperor Naruhito and Prime Minister Yoshihide Suga.

The ceremony paid tribute to Japan’s history and traditional crafts such as woodworking, as well as modern culture – the athletes processed to a score made up of video game themes from popular Japanese games.It was topped when Japan’s global superstar Naomi Osaka lit the Olympic cauldron to mark the start of the world’s biggest sporting event..

Tue Jul 27 , 2021
It’s a softer start to the week, with stocks tilting south, and a slump for China and Hong Kong stocks amid a technology crackdown.Bitcoin headed the other way, thanks in part to a help-wanted ad from Amazon.com. Speaking of tech, we’ve got all the heavy hitters rolling out results this week — Apple AAPL, +0.29%… 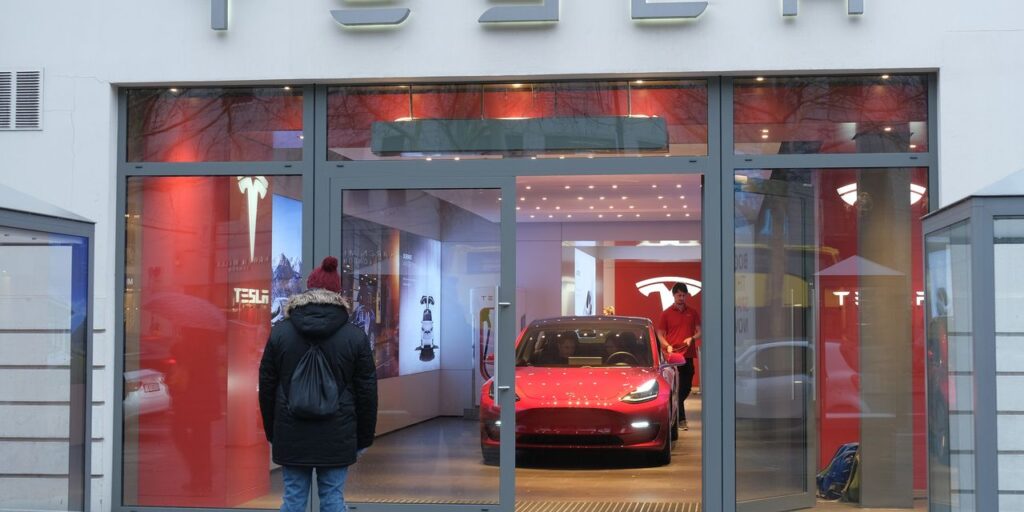