Up to 40% of respondents said they would invest the direct payments into BTC and stocks, with 61% saying they would choose Bitcoin over equities.
“Bitcoin is the preferred investment choice among check recipients.It comprises nearly 60% of the incremental spend, which may imply $25 billion of incremental spend on Bitcoin from stimulus checks,” said Mizuho analysts Dan Dolev and Ryan Coyne.“This represents 2-3% of Bitcoin’s current $1.1 trillion market cap.”
Biden signed the $1.9 trillion package, known as the American Rescue Plan, into law on March 11.

It contains $1,400 payments for many individuals earning less than $80,000, with dependents included in each household’s total — e.g.a family of three could expect $4,200.Many Americans have already reported receiving the funds via direct deposit, while others are waiting for paper checks in the mail.
This is the third direct payment to financially assist those affected by income insecurity during the COVID-19 pandemic.Lawmakers provided many Americans with $1,200 direct payments in April 2020, as well as $600 checks in January.

Crypto users who invested the full $1,200 into Bitcoin last year may have realized as much as $10,000 in gains at time of publication, following the asset’s rise to more than $60,000 in 2021.Share this: Blockchain Welcomes All, but General Tech Industry Lacks in Diversity Financial inclusion is often cited as a reason for the pursuit of crypto and blockchain innovation.

With gatekeepers monopolizing the global financial scene, several disenfranchised demographics have seen themselves cut off from viable channels of economic prosperity.Crypto and blockchain products are increasingly opening up international payment corridors, ensuring the democratization of global economics.Other platforms… Crypto Markets See Mix of Red and Green, With Half of Top 100 Coins Slightly Up Sunday, September 30: crypto markets are seeing a mix of red and green today.A little more than half of the top 100 cryptocurrencies have grown in the 24 hours to press time.The daily trade volume has declined, seeing a relatively sharp drop from around $15 billion yesterday to $13.8 billion at press time.Market visualization… CFTC Appoints Former Coinbase Exec as Director of Market Oversight Coinbase’s vice president Dorothy D.DeWitt will now serve as director of the division of market oversight at the United States Commodity Futures Trading Commission (CFTC).The U.S.

CFTC Chairman Heath P.Tarbert announced on Sept.17 that DeWitt will take responsibility for the CFTC’s oversight over derivatives platforms and swap data repositories, as well as… Arizona to Test Marijuana-Oriented Stablecoin in State Fintech Sandbox The state of Arizona has accepted a blockchain-based, cannabis industry-oriented payments solution into its fintech sandbox.According to a recent press release from the Office of the Attorney General, the company — called Alta — is a cash management solution for licensed medical marijuana providers and vendors.The Arizona-based financial services startup intends to offer a… Zcash (ZEC), Kusama (KSM) and Hedget (HGET) soar as Bitcoin hits $40K The sharp correction in Bitcoin (BTC) may have shaken out many leveraged traders, but the data shows whales and institutions aggressively purchased the dip and now bulls have shown they are determined to push Bitcoin price back above $40,000.The total crypto market capitalization has also recovered and surged back above $1 trillion.Crypto market data daily… Æternity Releases Final Hard Fork Software to Compete with Ethereum The core development team of blockchain platform Æternity announced the release of the software of its latest hard fork, namely Lima.Æternity announced in a press release published on Nov.

5 that the introduction of Lima improves the network’s virtual machines, governance and naming system.The purpose of the update explicitly described in the announcement is… Tezos Price (XTZ) Losing Steam After Dropping to Ascending Trendline? Over the past week, Bitcoin (BTC)and altcoins have taken a serious hit and currently, Bitcoin is still down 7.09% since topping out at $10,485 on Feb.13.Many altcoins that bore the brunt of the sharp correction are still nursing their wounds and the double-dip correction of the past week appears to have investors cautious… Unlicensed crypto exchange operator faces 25 years for laundering $13m A California resident is expected to plead guilty to charges of operating an unlicensed exchange and laundering more than $13 million.

The Modern Consensus 100 Most Influential People in Crypto 2021

Tue Apr 13 , 2021
The individuals moving, shaking, and shaping cryptocurrencies and blockchain technology right now By Leo Jakobson / March 15, 2021 / Coming up with a list of the 100 most influential people in crypto and blockchain is hard in any year.But doing it in 2021 is particularly difficult as the industry advanced from moving into the… 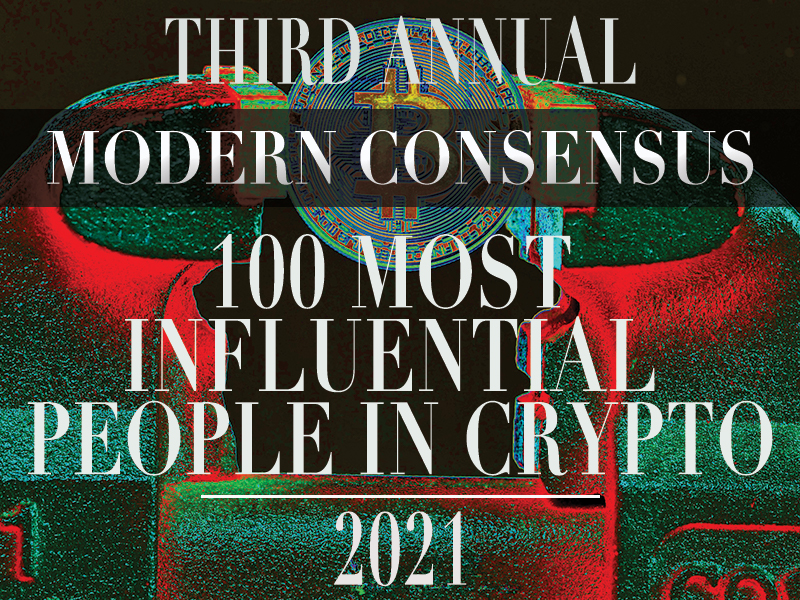