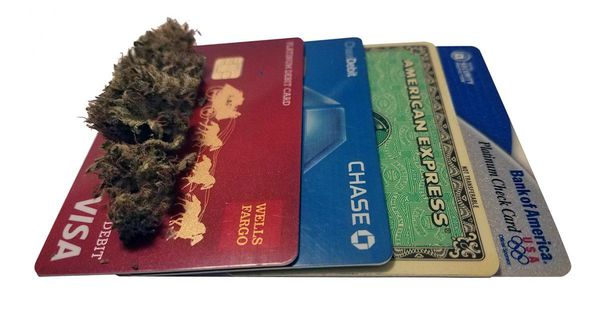 Cannabis can be purchased with pre-paid gift cards, but cannabis sale cash can not be deposited. ©Sara Brittany Somerset
Cannabis in America is still federally illegal, even in states with legal medical marijuana programs. Therefore, state-legal medical marijuana transactions are mostly conducted with cash. This cash is not allowed to be deposited in a bank, because The Federal Reserve regulates state-chartered member banks. Being unable to bank puts business owners in the cannabis space in a quandary on how to conduct business like other merchants.
PayPal’s terms of use state that their users cannot buy alcohol or cigarettes. Cannabis is lumped in with the big vice party that is alcohol, tobacco, and pornography. Therefore, cannabidiol (CBD), hemp and cannabis aren’t allowed to be purchased via PayPal either.

Similarly, using apps like Square or Venmo -which is a PayPal company- are risky. If the customer or merchant is caught using either for a cannabis-related transaction, their account will be shut down.
If a JP Morgan Chase account gets terminated, the bank will send the former client’s remaining funds by check after 30 days. If Amazon shuts down a seller account, it takes three months before they conclude their review process and disburse the account holder’s funds.
Being under constant threat of an account shutdown, and subsequent funds freeze, is not feasible for a legitimate business.
Even formulators who make skincare products using cannabidiol that only contains terpenes will get shut down by payment processors such as Stripe and Square.
“Skincare companies are calling their oils different things, so they can handle e-commerce,” says Roxanne Benton, CEO of Patriot Botanicals.
Business owners like Benton pay federal taxes on their company’s legal, hemp oil-derived income, but cannot legally bank in the United States.

While PayPal is not the most common option for shopping in a liquor store, it is a viable method of payment for purchasing vitamin supplements on Amazon. Therefore, why are CBD supplements that are legally sourced from industrial hemp under the farm bill (and do not contain THC) excluded? The feasibility of using blockchain technology, which is the underlying software technology that supports Bitcoin and all other Cryptocurrencies, to bank is debatable.
Blockchain technology is automated record keeping, with information stored in virtual, encrypted blocks that validate transactions through consensus mechanisms, such as two parties agreeing on the value of something tangible. With each completed transaction, the block goes through the encryption algorithm to become a new block, and gets added to the block” chain ” as a permanent, new and immutable database.

All blocks are connected in lineal, chronological order, with every block containing a “hash” of the previous block and becoming a new block with every validated transaction.
So far, there is not a standardized definition of Blockchain, but there is a set of common traits that blockchain technology almost always consists of, which is that it constitutes a decentralized, “immutable,” digital ledger. However, if a 51% attack, or forking, is taken into account, then blockchain is not necessarily immutable.
There are plenty of universal payment platforms to choose from, such as Zodaka.

Jordan Friedman, CEO of Zodaka notes, ”Both Blockchain and cryptocurrencies are not prevalent at the retail level, such as in cash-only cannabis dispensaries.

”
“Additionally,” he says, “Some solutions using cryptocurrencies have cropped up, but because cryptocurrency has a constantly moving price point, and has not come even close to broad public acceptance, the vast majority of retailers are not using Blockchain or cryptocurrencies in any banking or transactional function.”
The problem with any cryptocurrency in the cannabis space, Friedman explains, is that it doesn’t solve any of the core problems Cannabis merchants and businesses are facing. For example, if a dispensary doesn’t have a bank account in the first place, then getting money into a crypto account is still nearly impossible.

Additionally, businesses do not want to have to accept cryptocurrencies, whose value is constantly in flux.
“Moreover, because everything related to Cryptocurrency and Blockchain is so new, there is still a general trust problem,” says Friedman.

With Zodaka, you do not need a “wallet,” as with a cryptocurrency-based solution, or a pre-paid card system. Instead, “a consumer connects their bank account and can pay at any retailer that accepts Zodaka,” says Friedman. Friedman claims that any system that involves loading a wallet or a card means consumers cannot access the funds that they put onto that wallet or card immediately. In a world that is increasingly focused on immediate gratification, even a minimal delay can cause a negative user experience, especially for those who are prone to impatience.
The Internet is also awash with payment gateway solutions, such as Avangate, Cardinal Commerce, and Payza.

Universal payment platforms, like any other emerging competitive technology, will take time to establish industry standards. These standards will evolve, based on the number of worldwide users the companies have. However, as mentioned earlier, many of these platforms will not deal with clients in the cannabis space.
There are some thoughtful and creative workarounds for purchasing cannabis.
MTrac uses a closed loop blockchain, with one-to-one credits via a digital wallet.

However, unlike Friedman’s assertions, Kevin Curtis, Director of Sales for MTrac, insists that their platform is instantaneous.
Customers can use their credit cards, to deposit funds that convert to “MTrac credits.” A digital representation of those funds is delivered to the merchant. Like PayPal, there is a commission applied per transaction that is generally absorbed by the merchant, although merchants have the option to pass that commission fee along to their customers as well.

One of the pros of using MTrac to purchase pot is community safety.
“The main benefit of the MTrac digital payment platform is a safer community, which is achieved by reducing the risks associated with an entire industry relegated to running cash heavy operations.” Says Curtis. “Likewise, the transparent and traceable aspects of the ledger ease regulatory concerns, by bringing compliance and legitimacy to the industry, while minimizing the average business owner’s exposure to theft, violent crime, and the high costs associated with security and accounting measures necessary for dealing with cash.

MTrac Users have the option to create pre-paid visa -and over 200 other types- of cash gift cards. They can also use credit or debit cards at the register, without having to stop at an ATM prior to shopping. This is also advantageous for merchants , since consumers tend to spend 12-18% more when using plastic, than when spending their “hard-earned” cash.
Another advantage for merchants is that they can use the MTrac system to create e-checks to pay their employees. Budtenders, for example, can then discreetly deposit paychecks into their bank accounts, rather than make suspicious deposits of thousands of dollars of fragrant, pine-cone scented bills.
Other options are dispensaries and e-commerce sites allowing their customers to pay for cannabis using pre-paid credit or gift cards. Such cards are attainable almost anywhere, even pharmacies.
Both Friedman and Benton think using a two-step process is not sustainable for a business, and is a significant deterrent for customers, although some customers view this process as being no different from buying pre-paid calling cards to make long-distance phone calls.

One recreational cannabis user explains, “If I had to go through the process of buying a pre-paid card for Amazon shopping, sure I’d lose interest pretty quickly, but I’m willing to go through one extra step, like buying a pre-paid gift card at Rite-Aid, to buy weed though. Until weed is federally legal, using an untraceable gift card is still preferable to carrying $400 in cash to a dispensary, or having to register for a blockchain account.”.