What’s in Store for NVIDIA’s Cryptocurrency Business in 2018? Published December 31, 2017 Markets Motley Fool
Facebook Twitter Print NVIDIA (NASDAQ: NVDA) had another great year in 2017 , with its return of 82% far outpacing the S&P 500 ‘s 22.8%.
The stock’s performance reflects the company’s strong financial results and investor confidence in NVIDIA’s future. The bulk of the company’s growth during calendar year 2017 can be attributed to solid to stellar performance in its four target market platforms: computer gaming, data center, professional visualization, and auto.

Bitcoin is the oldest cryptocurrency and the largest by market cap, Ethereum is the second largest, and there are numerous newer and smaller cryptocurrencies.

NVIDIA’s CFO has shared two metrics relating to the company’s crypto business: revenue generated from sales of application-specific graphic boards, or GPUs, in the company’s second and third quarters of fiscal 2018, the latter of which ended in late October.
Period
Known Crypto Revenue (Within OEM and IP Category)
Total Revenue
Known Crypto Revenue As a Percentage of Total Revenue
Total Crypto Revenue (Estimate)*
Fiscal Q3 2018
$70 million
$2,636 million
2.7%
3% to 3.5%
Fiscal Q2 2018
$150 million
$2,230 million
6.7%
7.5% to 9%
NVIDIA’s total revenue from crypto sales in the past two quarters is greater than 6.

That’s because the company can’t know how many people are buying its GeForce gaming cards to use for mining cryptocurrencies, rather than buying the graphics boards it specifically designed for mining.
CEO Jensen Huang said on the Q2 conference call that the company believes the “large majority” of people that are using its products for mining are buying the application-specific GPUs. If Huang’s statement is accurate, it’s probably safe to say that total sales to crypto miners accounted for about 7.5% to 9% of total revenue in the second quarter and roughly 3% to 3.5% in the third quarter.
What can investors expect from NVIDIA’s cryptocurrency business in 2018? As things stand with the price action in the crypto world, the middle ground of quite bearish and bullish stances seems probable. On the negative side, assuming Ethereum’s market cap continues to grow, NVIDIA’s GPUs will become less and less effective at mining it. That Ethereum grew considerably from the second to the third quarter is surely the reason NVIDIA’s sales of its application-specific boards cooled off during this period, as the preceding chart shows.

NVIDIA’s GPUs are generally considered ideal for mining newly emerging cryptocurrencies that require mining. However, once such a digital currency gets large, someone will build an application-specific integrated circuit to mine it and others will increasingly follow suit, thus making GPUs second-rate at mining that particular digital currency.
Currently, Ethereum’s creator, Vitalik Buterin, and the cryptocurrency’s community are planning to do a hard fork to make a transition from Ethereum using a bitcoin-like proof-of-work (POW) protocol to their “Casper” version of a proof-of-stake (POS) protocol. Unlike POW, the POS protocol doesn’t require mining. So if this change is made, NVIDIA’s crypto business could decline even more.
On the positive side, the overall cryptocurrency market has been booming in late 2017, which is no doubt already encouraging folks to launch new digital currencies. And NVIDIA’s GPUs should be a top tool for mining some of them. Certainly, the crypto market can be expected to remain very volatile, which means that launches of new digital currencies will probably be, too.

So NVIDIA’s crypto revenue is likely to be very lumpy from quarter to quarter.
Don’t lose sight of the forest for the trees Wall Street is focused on the short term, which is why analysts are giving NVIDIA’s cryptocurrency business a lot of attention. However, investors with a long-term view shouldn’t concern themselves much with this topic.
Certainly it would be great for NVIDIA to keep benefiting from the crypto market — and investors should, indeed, keep seeing at least a small boost, according to Huang — but NVIDIA doesn’t need any crypto business to be a long-term winner. The company has irons in many of today’s hottest tech trends, including artificial intelligence (AI), driverless cars, computer gaming/esports, and virtual reality (VR).
Bitcoin is overhyped: 10 better buys for you now
When investing geniuses David and Tom Gardner have a stock tip, it can pay to listen. After all, the newsletter they have run for over a decade, Motley Fool Stock Advisor, has tripled the market.*
David and Tom just revealed what they believe are the ten best stocks for investors to buy right now.

.. and investing directly in Bitcoin was noticeably absent from their recommendations! That’s right — they think these 10 stocks are better buys.
Learn more
% render_component ‘sa-returns-as-of’ type=’rg’%
Beth McKenna has no position in any of the stocks mentioned. The Motley Fool owns shares of and recommends Nvidia. The Motley Fool has a disclosure policy .

Sun Jan 28 , 2018
by Andrew Weilbacher Bitcoin is one of the most sizzling themes on the planet at this moment, and numerous more investment-related heavyweights are supporting the world’s main crypto. Bitcoin is ever-increasingly becoming a world-wide financial product that gives a new lift to old, stagnating markets in equities. Billions are being invested to increase exposure as… 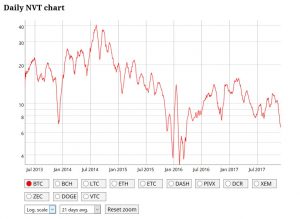