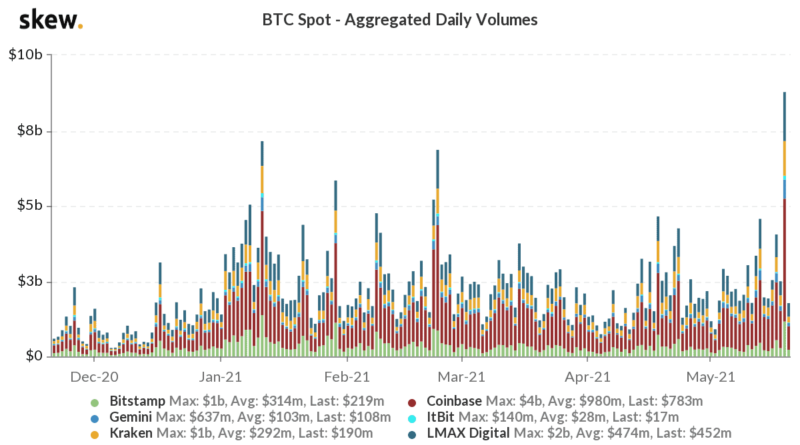 Submit Blog Home » Cryptocurrency News » Cryptocurrency News » $750 Million in Bitcoin Withdrawn From Exchanges After the Bloodbath to $30,000 $750 Million in Bitcoin Withdrawn From Exchanges After the Bloodbath to $30,000 May 20, 2021 0 Comments
May 19th, 2021, will remain in history as one of the steepest corrections in the cryptocurrency market.Bitcoin fell hard by $10,000 in minutes before it bounced off shortly after.While thousands of traders felt the adverse consequences of the enhanced volatility, larger investors used the opportunity to buy the dip as $750 million in BTC was transferred out of exchanges in minutes.The Records After The Dust Settled
The ever-volatile nature of the cryptocurrency industry struck hard yesterday.The primary cryptocurrency fell badly from above $40,000 to its lowest price tag since January at $30,000.It was a sudden price dump that affected the altcoins even worse – 30% to 50% declines were evident from Ethereum, Binance Coin, Cardano, Ripple, and more.
Apart from causing massive pain for leveraged traders with over $8 billion worth of liquidations in 24 hours, the overall spot trading volume skyrocketed.Data from the analytics company Skew demonstrated that the spot volume for the trading pair BTC/USD went to a record at around $9 billion.BTC/USD Spot Volume.

Source: Skew $750M In BTC Transferred Out of Exchanges
During the previous recent corrections, perhaps prompted by Elon Musk, Tesla, and China reports indicated that so-called short-term investors (holding BTC for less than a year) were those who sold out the most significant portions, even at a loss.
At the same time, on-chain data revealed that larger investors, typically referred to as whales, were accumulating.Such seems to be the case now as well.According to Glassnode, such holders withdrew about $750 million worth of bitcoin off exchanges in a matter of minutes.Bitcoin Withdrawals from Exchanges.Source: Glassnode
Some argue that these withdrawals came from institutional investors who were doubling down on their bitcoin engagements.This theory received support from the BTC premium on Coinbase.
The largest US-based crypto exchange is among the most preferred venues for (American) institutions to accumulate BTC.

When the platform sees a significant influx of buy orders, which is much higher than on other exchanges, it creates a price difference known as premium.
CryptoQuant data shows that while BTC was tumbling to its daily low, the metric went into negative territory.However, when the dust settled, and bitcoin started to regain its value, the Coinbase Premium went to a new all-time high of over 7.5%.The analytics resource concluded that “the higher the premium, the stronger the spot buying pressure from Coinbase.” Bitcoin Coinbase Premium.Source: CryptoQuant Share this: Sealing the Deal: The Rise of Blockchain-Powered Trade Finance Platforms Although they don’t hold the same disruptive promise of radical decentralization as do their permissionless counterparts, private blockchains that governments and corporations run are still capable of transforming entire sectors of the world economy.Global trade has long been viewed as one of the most conspicuous areas for instrumental application of distributed ledger technology (DLT),… Telegram To Pay $625K in Fees After Dropping a GRAM Trademark Lawsuit The encrypted messaging platform Telegram has to pay legal fees worth $625,000 to a cryptocurrency company as an aftermath of a lawsuit dating back to 2018.All Because Of The “GRAM” Trademark Telegram Messenger Inc.has been ordered to pay legal fees to crypto firm Lantah LLC after it dropped the lawsuit in August this… Blockchain Technology To Drive Wyoming State Banks? Wyoming State legislator Tyler Lindholm R-Sundance, also a co-chair of the government’s blockchain committee, sees big business opportunities arriving for banks in Wyoming if and when they transit into “special depository institutions” and adoption of blockchian.

Lately, this Midwestern state in the United States has been framing legislation which will legalize currency transactions and the… Ethereum Price Analysis: Can ETH Hold $250 Amid The Rising Bitcoin? Ethereum has recently fallen back toward the $250 support level after dropping by 1% over the past 24 hours.The cryptocurrency has now officially seen a stagnant period of trading during the past 30 days as the price has declined by roughly around 3.44%.Regardless of the recent price declines, Ethereum has still seen a… Ethereum Price Analysis: ETH Follows Bitcoin’s Latest Decline to $240 But Bullish Bias Holds Ethereum saw a 2.2% price decline today as it dropped from $250 level to hit $240 today.Earlier in the week, ETH rebounded from the strong $225 support, which allowed it to start to climb toward $250 this week.

In 2018, he took over $3 million from one company and failed to deliver bitcoins worth that amount.Crypto Fraudster Pleads Guilty Thompson served as the director of Volantis Escrow Platform LLC and Volantis Market… France to adopt legal framework for ICOs France proved itself to be a leader when it comes to the introduction and actualization of a key framework, targeted at the proper regulation of initial coin offerings, or ICOs.A key framework aimed at ensuring a well-governed and closely monitored procrss was approved by the National Assembly (Special Commission Committee).It was also reported… Leave a Reply You must be logged in to post a comment.Search.