Free agent quarterback Colin Kaepernick says he has “unfinished business” in the NFL and is prepared to come back to the league as a backup quarterback if he has to.The activist said in an interview on the “I AM ATHLETE” podcast released Monday that he just needs “the opportunity to walk through the door.” “I… 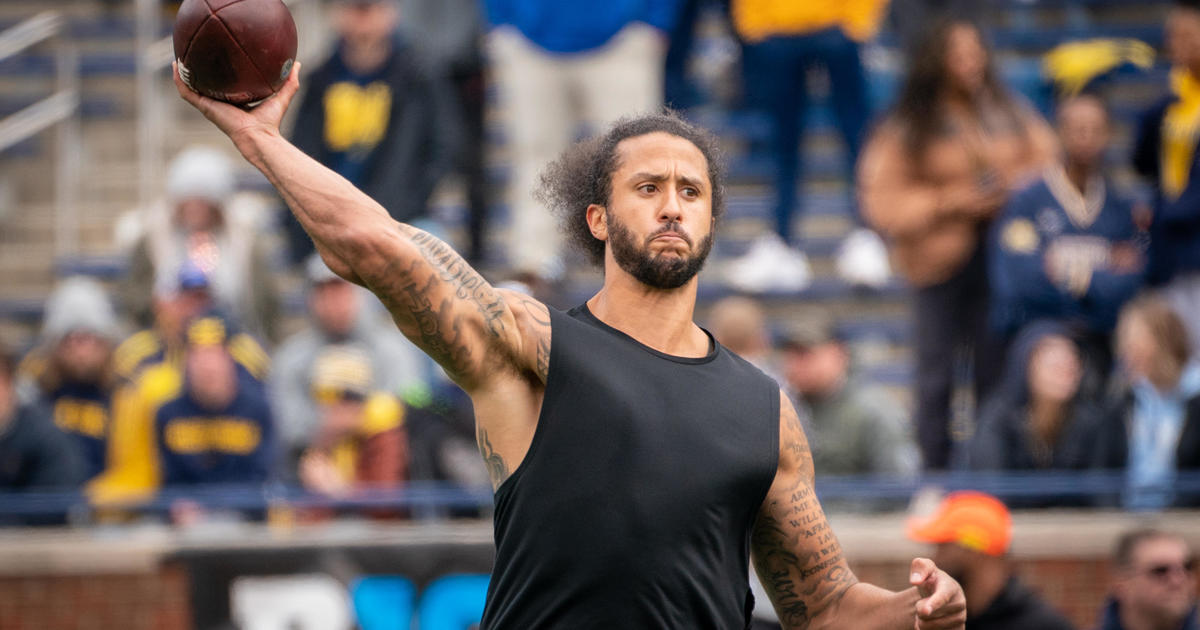 Free agent quarterback Colin Kaepernick says he has “unfinished business” in the NFL and is prepared to come back to the league as a backup quarterback if he has to.The activist said in an interview on the “I AM ATHLETE” podcast released Monday that he just needs “the opportunity to walk through the door.”

“I know I have to find my way back in,” he said.”Yeah, if I have to come in as a backup, that’s fine.But that’s not where I’m staying.And when I prove that I’m a starter, I want to be able to step on the field as such.”

Kaepernick has not been able to land a job with an NFL team since he began to take a knee to protest police brutality and racial injustice during the national anthem as a member of the San Francisco 49ers in 2016.He last played for the 49ers in 2017 and opted out of the contract, but was not signed anywhere else.He worked out with the Seattle Seahawks later that year, however, head coach Peter Carroll already had a starter with then-team quarterback Russell Wilson, who was traded to the Denver Broncos this off-season.

“No teams brought me for a workout” he said.

“No teams brought me in for an opportunity.

The one meeting with Seattle in 2017.Out of that, Pete Carroll said, ‘He’s our starter, we have a starter.’ Things moved on from there.But they don’t have a starter right now.”

The 34-year-old said he’s motivated to come back to the league to win a Super Bowl, which he reached in 2013 with the 49ers, but lost against the Baltimore Ravens.

“You had those dreams from when you were a kid.’I’m [gonna] be an NFL player and I’m going to win a Super Bowl.’ And for me, I have unfinished business on that front.I have been to the Super Bowl.We were one play away.Well, I need to finish that.”

He dismissed concerns he would be a distraction, and based on his past jersey sales and Nike’s $6 billion evaluation after they signed him, he stressed the business end of a team signing him “makes sense.” He also brought up the NFL’s “End Racism” messages in end zones and “Black Lives Matter” being worn on players’ helmets, which fall in line with his activism.

“Everything I’ve said should be in alignment with what you’re saying publicly,” he said, referring to the NFL.

In a message to general managers around the league, he said to let him “come in and let me compete.”

“The NFL is supposed to be a meritocracy …If I’m not good enough, get rid of me.

But let me come in and show you,” he said.

While training for an NFL comeback, Kaepernick has been keeping busy.He wrote a children’s book, “I Color Myself Different ” that was published this month, and his high school years are the subject of a Netflix series called “Colin in Black & White ,” which was released last year.He also launched an initiative earlier this year through his Know Your Rights Camp that will offer free, secondary autopsies to family members of anyone whose death is “police-related.”

Trending News Professor awarded $400,000 after being disciplined over wrong pronouns Safety sensors on seat of teen killed on thrill ride were manually adjusted in “unsafe” way Man dies trapped inside car wash GE refrigerators sold nationwide recalled after 37 injuries Do you have to wear a mask on your flight? These airlines are dropping mandates Christopher Brito Christopher Brito is a social media producer and trending writer for CBS News, focusing on sports and stories that involve issues of race and culture..

Thu Apr 21 , 2022
"The period when the economy can live on reserves is finite," said Russia's top central banker.Russia can't use nearly half of its $640 billion foreign exchange reserves due to sweeping sanctions.But President Vladimir Putin said the West's "economic blitzkrieg" against Russia has failed.Sign up for our weekday newsletter, packed with original analysis, news, and trends…