British Columbia’s C OVID-19 mask mandate has returned, and those who oppose the health regulation are once again pushing back. In Nanaimo, that pushback has taken the form of face mask medical exemption cards being distributed by a local woman. The catch? The cards are fake and have no legal standing. Read more: B.C.reports 867… 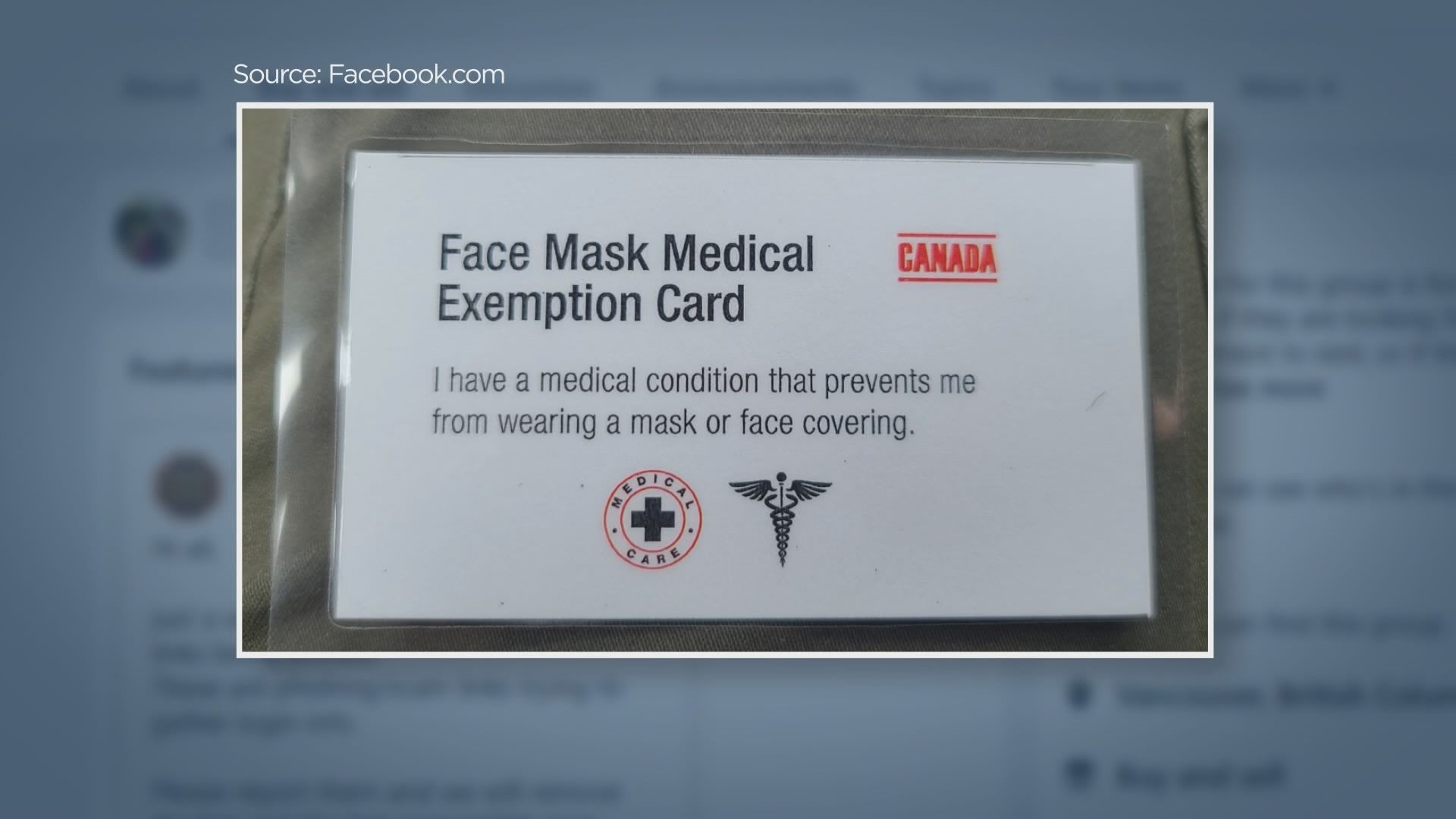 British Columbia’s C OVID-19 mask mandate has returned, and those who oppose the health regulation are once again pushing back.

In Nanaimo, that pushback has taken the form of face mask medical exemption cards being distributed by a local woman.

The catch? The cards are fake and have no legal standing.

The woman, who has faced online backlash and agreed to speak with Global News only on the condition she not be identified, said she got the cards at a “freedom rally” in July.

She’s been distributing the cards to anyone who wants one through a Facebook group she created called “Island Mamas Unite,” or from a box on her front porch.

The cards state, “I have a medical condition that prevents me from wearing a mask or face covering” on the front, along with the phone number for the Human Rights Legal Centre on the back.

The Facebook group has since been set to private, with access by referral only, after backlash against the cards.

“If you decide you don’t agree with this group, leave.Don’t call the fricken cops on me,” she wrote in a Facebook post.

Nanaimo RCMP confirms it did receive a report about the cards, and attended the woman’s residence.

“There is nothing wrong with what I’m doing,” she said.

Asked about the cards on Friday, B.C.Premier John Horgan said he didn’t think many people would be fooled.

“The forgeries you talk about may appear, but I don’t believe they’ll be successful,” he said, noting that no real exemption cards exist to spoof.

It’s a point the Ministry of Health echoed.

“There is no card in B.C.to indicate someone is exempt from wearing a mask.

As outlined in the mask mandate, masks are required for everyone in many public indoor spaces,” a ministry spokesperson said in an email.

“A person could be subject to a fine if they do not wear a mask in an indoor public space, unless they are exempt.”

But for those willing to try their luck, the fake face mask medical exemption cards are ready for pick up outside the Nanaimo home.

Having reached 'near extinction', can the WA Liberals save themselves?

Mon Aug 30 , 2021
WA Liberals' searing review finds branch-stacking, factions at heart of crisis [Rhiannon Shine] The Liberal Party is almost broke, broken and in desperate need of change.That conclusion was expressed bluntly and brutally in a self-appraisal, delivered to the public by party elder Danielle Blain, that [found the party was in disarray and needed urgent reform…