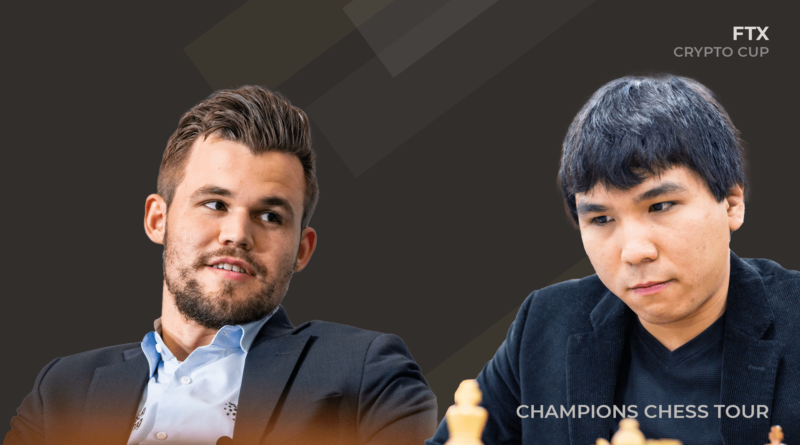 Updated: May 30, 2021, 6:31 AM | 52 | Chess Event Coverage
GM Magnus Carlsen and GM Wesley So , the current numbers one and two of the Champions Chess Tour, will play in the final of the FTX Crypto Cup.Carlsen defeated GM Teimour Radjabov twice to reach the final.One win against GM Ian Nepomniachtchi was enough for So, who had won the first match.How to watch? The games of the FTX Crypto Cup can be found here as part of our live events platform .IM Levy Rozman and IM Anna Rudolf are providing daily commentary on GM Hikaru Nakamura’s Twitch channel starting at 8:00 a.m.Pacific / 17:00 Central Europe.So-Nepomniachtchi 2-1
After So drew so many games in the preliminaries, it’s really great to see him playing in another gear in this knockout phase.Even his opponent praised him for his “impeccable calculation” as Nepomniachtchi bumped into a wall of good moves on day two of the semis.

Great performance from Wesley, impeccable calculation today, congrats on reaching the finals! Looking forward to witness the finals and especially upcoming Bucharest #GrandChessTour OTB battles! #FTXCryptoCup #ChessChamps — Yan Nepomniachtchi ( @lachesisq ) May 29, 2021
While we’re at it, Nepomniachtchi also made a reference to the return of the Grand Chess Tour.We’ll post news about that soon, but for now all you need to know is that the first (over-the-board!) event in the Tour, which had to be canceled altogether last year due to the pandemic, will run June 3-15 in Bucharest, Romania.For all upcoming major events see Chess.com/calendar .
So did out-calculate Nepomniachtchi in the first encounter, but it must be said that the Russian missed a chance nonetheless:
Because he only needed two game points, So didn’t mind a quick draw in his white game and he used the same line against the Grunfeld he had used before to do so.And then there was more excellent calculation as the American GM extended his unbeaten streak to 29 games: Wesley So seems in absolute top shape.Photo: Maria Emelianova/Chess.com.Carlsen-Radjabov 3-1
Carlsen managed to turn his first-day frustration into “positive anger,” meaning good focus and strong chess.Beating Radjabov as Black in the first game was a very welcome start and when two draws followed, the Azerbaijani went down again in his must-win game.
Radjabov’s first loss was mostly caused by a one-move blunder in the endgame:
Like So, Carlsen then “sacrificed” his white game with an insipid draw in the 5.Re1 Berlin, before holding a draw as Black in game three.
The world champion then didn’t mind facing 1.e4 b6 as he turned the position into a Breyer-like Ruy Lopez where the standard plan of opening the f-file proved decisive.Opening knowledge is often useful in other openings! Another clash between Carlsen and So awaits us.

Here they are playing in the 2019 Fischer Random World Championship.Photo: Maria Emelianova/Chess.com.All Games Day 7
The FTX Crypto Cup runs May 23-31 on chess24.The preliminary phase was a 16-player rapid (15|10) round-robin.

The top eight players have advanced to a six-day knockout that consists of two days of four-game rapid matches, which advance to blitz (5|3) and armageddon (White has five minutes, Black four with no increment) tiebreaks only if a knockout match is tied after the second day.The prize fund is $220,000 with a bonus of 2.1825 Bitcoin.
Previous reports: .