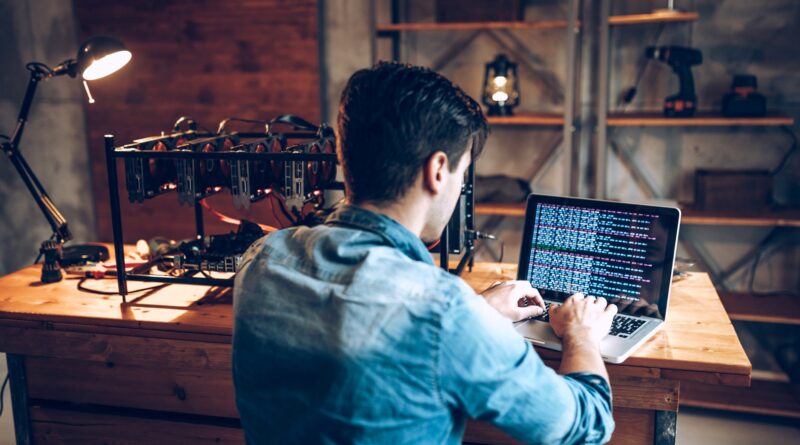 Here’s How Bitcoin Is About to Become More Like Ethereum Smart contracts could be coming to bitcoin by November.Jun 21, 2021 at 1:12PM Author Bio After spending more than a decade travelling the world exploring different cultures and languages, I’m happy to now be contributing to the Motley Fool’s mission to make the world smarter, happier, and richer.What’s great about exploring business and the economy is the insight it gives you into how things are in the world.While I no longer get to exercise my analytical muscles with linguistics, it’s rewarding to analyze business and share my opinions through this platform.Appreciate my writing, have an idea for me, or is there an issue with something I wrote? Feel free to reach out to me at [email protected]

Follow @TMFJaguar
With bitcoin ( CRYPTO:BTC ) , people can complete financial transactions digitally, or they can simply hold coins as they would any other investment.

By contrast, other cryptocurrencies like Ether (the tokens that are part of the Ethereum blockchain) have more decentralized finance (DeFi) features, including something known as smart contracts — but more on that in a moment.
Some investors recognize Ethereum’s broader utility, and because of this, they believe it has more long-term upside than bitcoin.However, cryptocurrency investors need to know that a big change is coming to the bitcoin blockchain network.

And when it happens, bitcoin will be a lot more like Ethereum than it is now.Image source: Getty Images.There’s two kinds of forks
The likely pseudonymous Satoshi Nakamoto posted the bitcoin whitepaper in 2008 (whitepapers are documents used by blockchain networks outlining the mechanics of the system).No one party controls bitcoin — it’s decentralized — something many cryptocurrency investors love.

But in the whitepaper’s final section, Nakamoto acknowledged bitcoin might need to be updated someday.
How do you change something when no one’s in charge? For bitcoin, developers make a Bitcoin Improvement Proposal (BIP), and these are “voted” on during the mining process.Indeed, there’s been changes in the past — these are called forks.
Now, let’s say people in the bitcoin community disagree on a proposal.Occasionally this happens and creates what’s called a “hard fork” — select miners take their ledgers in a completely different direction from the rest of the group.That’s where cryptocurrencies like Bitcoin Cash and Bitcoin Gold came from.

It’s kind of like how French, Italian, and Spanish are different languages, but they all started as Latin long ago.These bitcoin communities wanted a change and were willing to go their own way to do it.
However, there’s also what’s known as a “soft fork” where the vast majority of bitcoin miners agree to go in the same direction.If miners are all good with the proposed changes, they upgrade their software and keep moving forward together.
At least that’s what a soft fork is in theory.In reality, the last so-called soft fork was BIP-141 (the 141st bitcoin proposal) which came in 2017.

But Bitcoin Cash hard forked just prior to SegWit activation while Bitcoin Gold left shortly thereafter — hardly widespread consensus.Image source: Getty Images.Meet Taproot
Some people refer to the SegWit fork as bitcoin’s “civil war.” And the process was so contentious that there hasn’t been a major soft fork — a major upgrade — since.But that’s all about to change.

On June 12, bitcoin developers noted that over 90% of bitcoin miners had signaled support for a major upgrade that was proposed years ago, dubbed Taproot.
Taproot intends to make bitcoin more private and more scalable, in addition to unlocking new features.The proposals in Taproot aren’t necessarily revolutionary for a cryptocurrency.For example, Taproot will implement a new signature protocol for bitcoin called Schnorr.I don’t bring up Schnorr to debate the merits — I only wish to note that this is a change that Bitcoin Cash already implemented in 2019.So bitcoin isn’t blazing any new trails here.
However, Taproot updates don’t have to be revolutionary to be important.Crucially, bitcoin has had a scalability problem for years.Consider that over the past five years, the total hash rate of the bitcoin blockchain network has skyrocketed — this is the computing power needed to process transactions.

It comes with high consumption of electricity, and it’s why some people believe bitcoin is unsustainable.Moreover, over these past five years, average daily transactions haven’t budged — the network processes only hundreds of thousands of daily transactions whereas credit cards can handle hundreds of millions .Data by YCharts .
With Taproot, bitcoin is expected to take a step toward scalability by essentially shrinking transaction data down to make it quicker and less energy intensive.
However, for me, the bigger leap forward for bitcoin is how Taproot will allow smart contracts.A smart contract is executed by the blockchain network automatically when the stipulations of the contract are met.Until now, Ethereum has dominated this real-world application angle, and it’s why I personally own it as well as bitcoin.Developers previously couldn’t build on the bitcoin blockchain like they could on the Ethereum blockchain, but soon, they’ll be able to.
With over 90% of miners officially approving, the Taproot update process has been set in motion.By November, miners need to be operating with the upgrades.What remains to be seen is whether developers will start building bitcoin applications that will be adopted as those on Ethereum’s blockchain are.

However, if this new use case for bitcoin does enjoy wide appeal, it could help sustain demand for the coins long term.This article represents the opinion of the writer, who may disagree with the “official” recommendation position of a Motley Fool premium advisory service.We’re motley! Questioning an investing thesis — even one of our own — helps us all think critically about investing and make decisions that help us become smarter, happier, and richer.Motley Fool Returns Stock Advisor S&P 500 571%.