To understand critical issues facing the U.S.economy — soaring inflation, worker shortages and perhaps a looming recession — researchers must understand human behavior.They need to know how everyday Americans will react when pump prices double or shelves go bare.That’s why it’s somewhat alarming to learn that academia in general — and economics in particular —… To understand critical issues facing the U.S.economy — soaring inflation, worker shortages and perhaps a looming recession — researchers must understand human behavior.They need to know how everyday Americans will react when pump prices double or shelves go bare.That’s why it’s somewhat alarming to learn that academia in general — and economics in particular — has quietly become the province of an insular elite, a group likely to have had little exposure to the travails of America’s vast middle class.In 1970, just 1 in 5 U.S.-born PhD graduates in economics had a parent with a graduate degree.Now? Two-thirds of them do, according to a new analysis from the Peterson Institute for International Economics.The trends are similar for other fields (and for foreign-born students), but economics is off the charts.This partly reflects population trends: Over that same period, the share of parents with graduate degrees and college-age children rose 10 percentage points, to 14 percent, our analysis of Census Bureau data shows.But compared with the typical American, a typical new economist is about five times more likely to have a parent with a graduate degree.The new analysis comes from Anna Stansbury of the Massachusetts Institute of Technology and University of Michigan graduate student Robert Schultz, who got their hands on detailed data on U.S.PhD recipients going back more than 50 years.The data includes extensive information about almost half a million recipients in the 2010-to-2018 period alone.It shows that the elite dominate even more among the top schools that produce about half of all future economics professors.

Among the top 15 programs, 78 percent of new PhDs since 2010 had a parent with a graduate degree while just 6 percent are first-generation college students.To an outsider, the long path to a professorship can seem frustratingly opaque, particularly in economics.PhD programs tend to require a hidden curriculum of classes in subjects such as mathematics that are not technically required for economics majors.

If you discover economics late in your college career and don’t have expert guidance, it might already be too late to get on the PhD track.Similar hidden hurdles lurk in the job market and academic publishing.University of Southern California economist Robert Metcalfe said the hidden curriculum is just the beginning.

Elite social networks determine which economists get accepted at top schools and published in top journals, and it can be difficult for first-generation students such as himself to break in.“I’m always on catch-up.That’s because I come from a background that didn’t know anything about academia,” said Metcalfe, who grew up in southern Wales in the United Kingdom, where his dad worked as a warehouse man at a brewery while his mom stayed home to raise four kids.“I got tenured before the age of 40, but I just feel like I’m always one step behind in the academy.”At every point where first-generation students typically fall through the cracks, Metcalfe was fortunate to find mentors from working-class backgrounds who could help him through.Among them was influential University of Chicago economist John List.

List, son of a secretary and a truck driver in Sun Prairie, Wis., helped pioneer the use of real-world economic experiments.He has advised everyone from White House officials to executives at Uber, Lyft and Walmart, where he currently reigns as chief economist.“I would not be an academic economist today,” Metcalfe said, “if senior role models who shared my working-class background hadn’t helped me navigate and survive elite academic institutions such as the University of Oxford and the University of Chicago.”This summer, Metcalfe and List aim to expand their mentoring with a student workshop called First-gen Research and Mentoring in Economics (FRAME).Stansbury said she also wonders if courses like Econ 101 might put off students from low-income backgrounds.“I also worry that some of the terminology that’s used, like ‘unskilled’ or ‘low ability’ to describe people who are in low-paid jobs or with little formal education, is offensive,” Stansbury said.“And I can see that this would be disproportionately so to people who are coming from backgrounds where these words are describing family members and friends.”This study is one of the first to describe academia’s struggles with economic diversity, but its racial diversity issues have been well documented.They’re particularly pronounced in economics, which has fewer underrepresented minorities among its PhD graduates (about 6 percent) than any other major field.Why do people from elite backgrounds dominate academia? A separate analysis suggests a simple answer: When many of a job’s rewards are non-monetary, that job tends to be done by people for whom cash is not a concern.“Who gets to be in the kinds of occupations you associate with more creative, enjoyable and fulfilling work? We found that, among people with similar levels of education, people in those jobs disproportionately come from richer families,” said Boston College economist Danial Lashkari.

“Sharing these results with colleagues, we have heard numerous anecdotes that make us think this finding resonates with many on a personal level.”In a recent working paper , Lashkari and New York University’s Corina Boar used a long-running U.S.survey to calculate the quality of working life enjoyed by professionals in scores of different jobs based on worker treatment, physical strain, intellectual stimulation and worker autonomy.At the top of the list, we find professors and other postsecondary educators, curators and librarians, and architects.Drivers, freight handlers and mail delivery workers are at the bottom.The academics then used surveys that follow people across lifetimes and generations to find out whether certain jobs were more or less likely to attract people from wealthy backgrounds than people with more humble roots.When they compared the two lists, they found a strong relationship between a job’s non-monetary benefit and how attractive it was to children from high-income households.If a talented student from a wealthy background is offered a choice between becoming a curator or professor or doing less-rewarding work in finance that pays $25,000 more a year, that person probably will gravitate toward more enjoyable and fulfilling work at a museum or university, Lashkari said.To them, an extra $25,000 just doesn’t mean that much.Whereas someone without a privileged background is less likely to pass up better-paid work in finance or law.Lucie Schmidt was the first in her family to graduate from college.

She was also a single mother.Like many in her position, it never occurred to her to study economics: She was interested in poverty, not business and finance.But when she took an economics class to meet a prerequisite, she saw an opportunity.“If you care about reducing poverty,” Schmidt said, “economics provides you with these really great tools to analyze those kinds of policies.”Now she’s an economist at Smith College, where she maintains a list of first-generation economists on Twitter .She studies family structure, the social safety net and anti-poverty programs, many of which have been aimed at single mothers.“Having been a recipient of some of these programs at one point gives you a different perspective,” Schmidt said.

“There’s a pretty direct link, I think, between the things that I’m interested in and my personal history.”The University of Chicago’s List, who reminded us that “the chosen people at birth don’t have a monopoly on innovative ideas,” draws a clear line between his formative years and his substantial contributions to the field.The endless weekends he spent driving across the Midwest, dealing baseball cards at shows to help finance his education, showed him how economic theories could be tested in the real world.“Those experiences gave me unique insights that helped me to introduce field experiments in a novel way in the early 1990s to economics,” List told us.“Step back and ask yourself: How many other ideas did we lose because of exclusivity? Many future breakthroughs will come from individuals with off-the-beaten-path histories,” he said.“So it is not only equitable to give everyone a shot, I firmly believe it is efficient too.” Hi friends! Do you have thoughts on this story, or literally anything else? The Department of Data is here for you! We have data on the places with the smallest home sizes and the most-expensive transit projects , but maybe you’ve always wondered how many literal bachelors have bachelor’s degrees or whose voters — Trump’s or Biden’s — are more likely to wear sunglasses in their profile photos? Just ask! If your question inspires a column, we’ll send a button and ID card recognizing you as an official agent of the Department of Data ..

Sat Jul 9 , 2022
The U.S.saw stronger than expected job growth in June, as the economy added 372,000 jobs and the unemployment rate remained at 3.6%, according to data released by the Bureau of Labor Statistics on Friday. The data shows moderately lower but robust job growth, despite aggressive borrowing cost increases from the Federal Reserve. The leisure and… 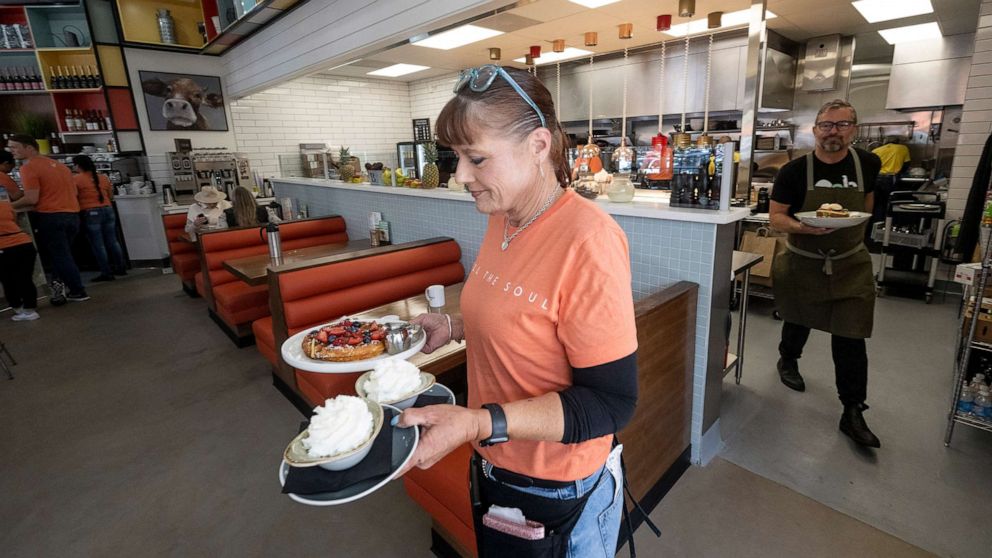