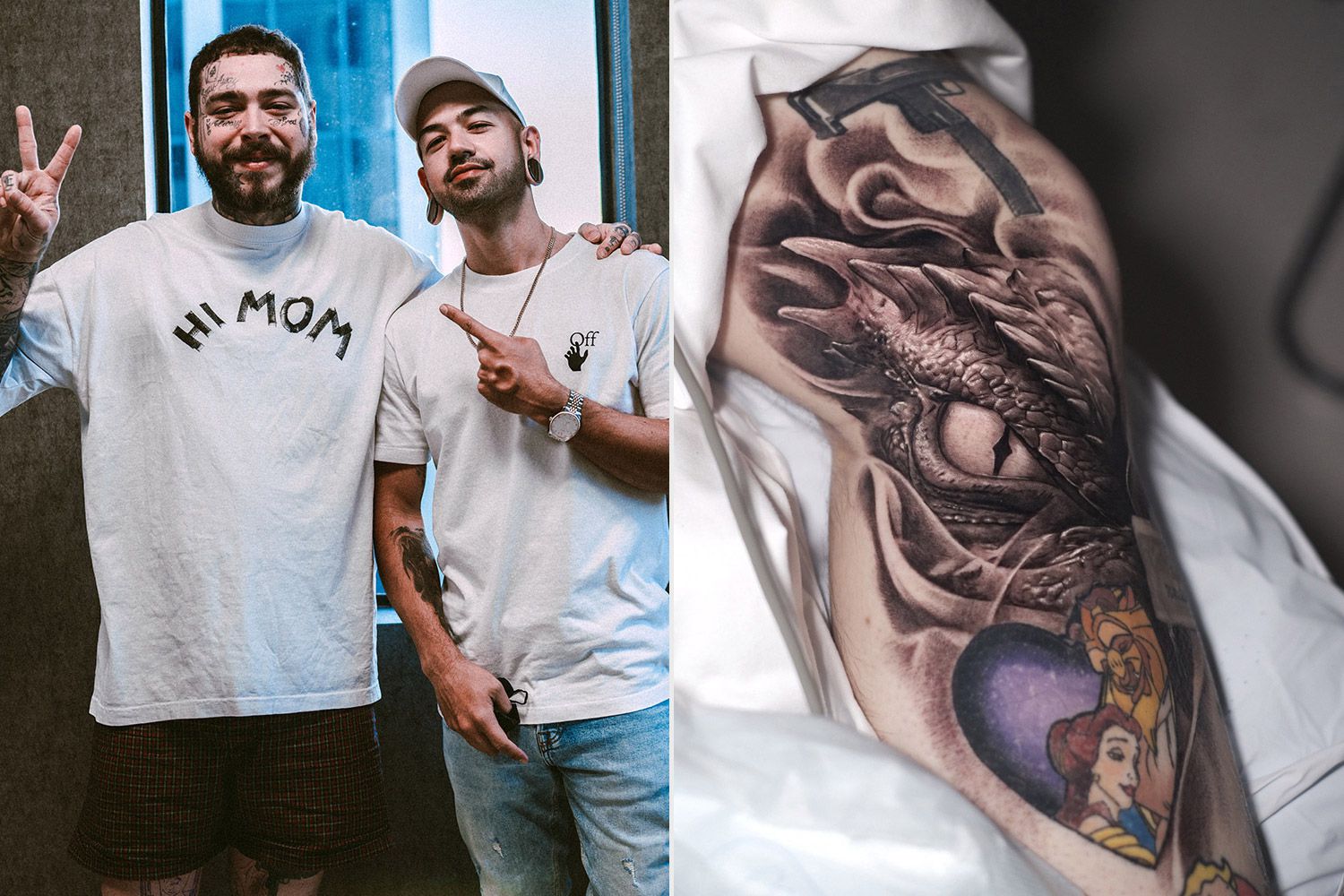 Tattoo Artist Jose Contreras Says the Latest Celebrity Trend Is Getting Inked Under Anesthesia Contreras has done tattoos for musicians Post Malone and Ozuna, pro athletes Anthony Davis and Lonzo Ball and more By Hedy Phillips Published on October 6, 2022 03:49 PM Share Tweet Pin Email Photo: Willy Weilon, jose Contreras Your favorite celebrities have found a whole new way to get tattooed that takes some of the pain out of the process: going under anesthesia.

Celebrity tattoo artist Jose Contreras , who has inked celebrities like Post Malone , Ozuna and Odell Beckham Jr., has recently found himself working with a team of tattoo artists — along with anesthesiologists and nurses — to ink people’s skin while they’re asleep.

“[Celebrities] pay to go under anesthesia so they can get multiple tattoos done in just one sitting,” Contreras tells PEOPLE.”Imagine five tattoo artists working at the same time on your full back piece, so in seven hours you can get your full back piece with no pain.You just go under, you wake up, and your full back is done.Imagine that.”

The artist, who is originally from Venezuela but now primarily resides in Texas (though he travels all over the world for work), tells PEOPLE that the team he works with in Los Angeles is the only time he’s encountered such a practice, and it’s one that even he thinks is kind of “crazy.”

“They actually go to a real clinic,” Contreras says of how the process works.”They’re actually with real anesthesiologists and nurses, almost like you are getting a real surgery.”

Contreras has worked with a team of artists in this manner on a number of celebrity clients, adding that at times they’ve had upwards of 10 artists inking a single person’s skin while they’re put under.

Never miss a story — sign up for PEOPLE ‘s free weekly newsletter to get the biggest news of the week delivered to your inbox every Friday.

Willy Weilon Kyle Richards Unveils 3 New Tattoos at ‘Real Housewives of Beverly Hills’ Reunion This method is obviously much more involved than a typical visit to a tattoo shop, which is why it requires medical supervision and deep pockets.

The people who are undergoing such appointments are paying for all of the artists’ work, plus the medical professionals and the facility, since it’s not taking place in the standard place of business.Though the price tag can vary by customer, it is surely quite steep.

It also comes with a larger risk than a standard tattoo appointment, as going under anesthesia is a medical procedure.

Though adverse reactions while under are rare, according to the Mayo Clinic , it can happen.People also usually see after effects that include drowsiness, nausea or muscle aches.It’s important to take that into consideration if getting tattooed in this manner is of interest and discuss with medical professionals.

Anyone with tattoos knows that aftercare is a large part of the process.Tattoos are an open wound that require close attention until they’re healed.

This includes washing them and keeping them hydrated as your skin scabs and dries out.For someone to have so much work done on their body at one time, the aftercare can be quite difficult — and painful.

“That is a lot to handle for the body,” Contreras says, adding that oftentimes the medical professional overseeing the procedure would prescribe an antibiotic or painkiller to assist with the healing process on such a large area of skin.

“Imagine four or five guys working at the same time on one body.It’s a lot to handle.Definitely the next day it’s sore.”

Post Malone is one of Contreras’ most famous clients, and the artist worked on him while he was under anesthesia.A group of tattoo artists worked together, with Contreras focusing on a dragon eye and what he calls a few “filler” tattoos to take up some of the empty space on his skin.

“I’ve been very fond of Post Malone , so for me that was a big check, like, ‘Oh yes, I was able to work on this guy,'” Contreras says.”It was kind of crazy to even be able to work with him, also just because he’s such a super nice guy.He’s always having fun.It’s almost like he’s known you forever, right away.”

Brooklyn Beckham Has 70 Tattoos Dedicated to Wife Nicola Peltz: ‘She Always Cries’ Willy Weilon With traveling all over the world to tattoo, Contreras has seen a little bit of everything when it comes to people and tattoo trends — and the celebrities may have fancier methods of getting their tattoos, but the ink trends themselves are the same across the board.

On the rise is what Contreras calls “micro realism,” or tiny tattoos with a lot of detail.

Post Malone Gets Baby Daughter’s Initials Tattooed on His Forehead — See the New Ink! These tattoos are not only trendy because they’re beautiful but also because they’re something that wasn’t even physically possible until recent years, alongside the improvement in tattoo technology.As tattooing equipment gets more modern and more savvy, tattoos can not only last longer, but they can be more precise.With the ability to get so much detail in a small space, people are flocking to getting their own micro-realistic tattoos.

“Some people are scared to get their first tattoo and don’t want to get something too big,” Contreras tells PEOPLE.”But they’re seeing those realistic tattoos that look so amazing — and they’re often larger.

Now they can get that amazing tattoo, but on a small scale.I feel like that is something that is getting more and more popular right now.”

Celebrities with Face Tattoos Contreras specializes in larger pieces, especially animals — he’s known for doing lions and tigers — but like most artists who are experts, he can also ink a beautiful tiny tattoo with just as much skill.Even he finds it fascinating how vastly tattoo equipment improves over time, allowing him to hone his artistic skills.

“I’ve been tattooing all these years, and even for me, sometimes I still think it’s so crazy that with needles and ink, you can do that on real skin.How crazy is that?” Contreras says.”I don’t know, sometimes you just get used to it and don’t think about it too much, and it’s just natural.

But sometimes, you are very happy with the result and compare it with the photo, and you say, ‘Wow, it’s still crazy that you can put that amount of detail in real flesh.'”

Related Articles Grimes Says She’s ‘Very Seriously Considering’ a White Ink Face Tattoo: ‘It Feels Like It’s Time’ 20 of the Wildest Rules You Didn’t Know Contestants Have to Follow on ‘The Masked Singer’ Drake Hilariously Pokes Fun at His Dad’s Tattoo of His Face: ‘Why You Do Me Like This’ 6 Things to Know About the BBL Photofacial Kim Kardashian Loves Sylvester Stallone Wanted to Alter Jennifer Flavin Tattoo to Make Her Look Like Wonder Woman: Tattoo Artist Actress McKenzie Westmore Opens Up About Undergoing Reconstructive Surgery After Bad Filler These Clear Scratching Shields Prevent Cats from Ruining Furniture, and They’re on Sale for $14 at Amazon Tess Holliday Tells Fans Not to Follow Plastic Surgery Trends: ‘You’re Perfect as You Are’ Kourtney Kardashian Tattoos ‘K’ on Husband Travis Barker: ‘My Finest Work’ 9 Sizzling Snaps of ‘The Bear’ ‘s Chef Carmy, Played by Jeremy Allen White Alana ‘Honey Boo Boo’ Thompson Is Considering Weight Loss Surgery — but Should Teens Get it? A Doctor Explains Tattoos and True Love! See All of Pete Davidson’s Ink Dedicated to Girlfriend Kim Kardashian Why I Chose to Have a Medical Abortion — Twice — While Struggling with Infertility for Years Social Media Is Rife with Tips on Accessing Abortion Pills: What’s Real, What’s Fake — and What’s Safe? Everything Chrissy Teigen Has Said About Her Sobriety The Beginner’s Guide to Finding a Therapist.

Fri Oct 7 , 2022
New York University's firing of Professor Maitland Jones Jr., following student complaints about poor grades has lit a fuse under parents who say the lowering of academic standards in U.S.school is doing students no favors.Jones, an award-winning professor of organic chemistry, taught for four decades at Princeton before NYU.Princeton University's dean of faculty credited him… 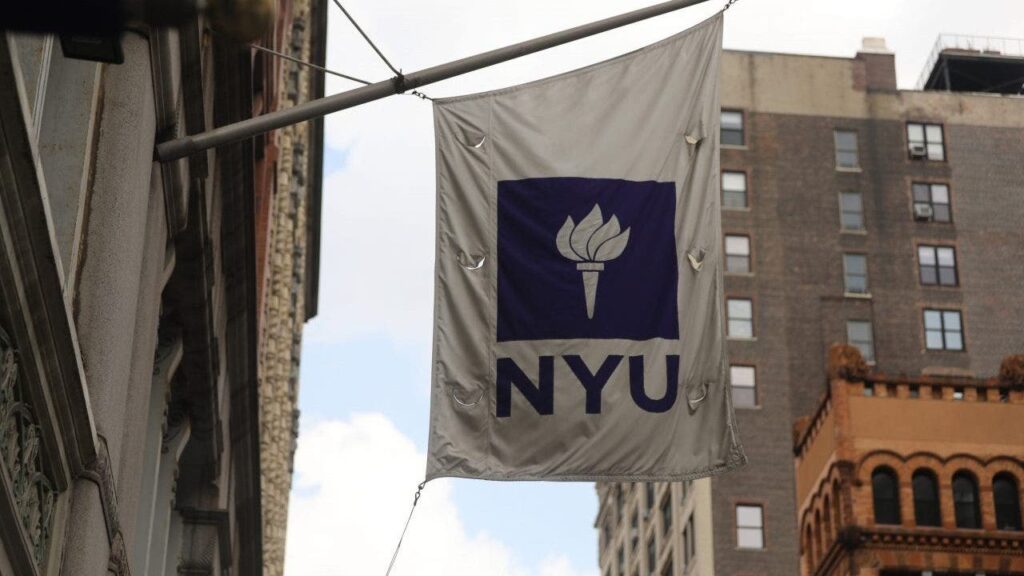