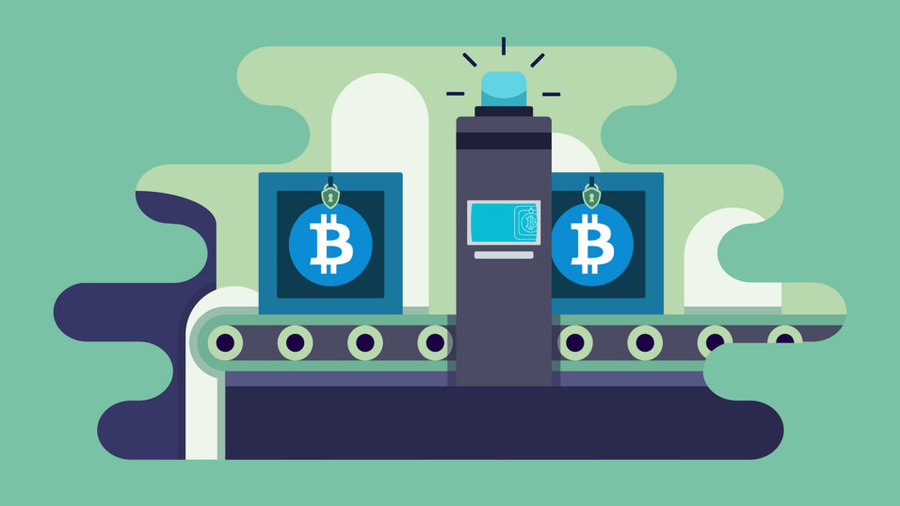 Bitcoin 101: Everything you need to know about investing, buying, and mining digital currency September 2, 2018 Bitcoin Mining by Descryptive, Creative Commons The crypto industry is booming, and it’s unlikely to slow down for a long time. For anyone outside of the community, understanding the basics can be a challenge as cryptoinsiders tend to explain things very technically. Here, I have tried to break down crypto concepts. So if you’d like to understand crypto basics, read on… What is a Blockchain? A blockchain is made up of a growing list of records, known as ‘blocks’. These blocks are linked together using cryptography. A blockchain is a decentralized public ledger. Essentially, this means that it is a database that is continually being shared and synchronized across a network.

If any changes are made to this ledger, all changes will be copied to all participants in the network almost instantly. There are many different blockchains in existence. The most well-known blockchain is the Bitcoin blockchain, as Bitcoin was the first application of blockchain technology. However, it is important to realize that ‘Bitcoin’ and ‘blockchain’ are not the same things.

Rather, Bitcoin was built on top of blockchain technology. C/o Descryptive, Creative Commons What is a Cryptocurrency? A cryptocurrency is a digital currency that is designed to be used as a medium of exchange. It uses cryptography to increase its security. Not every cryptocurrency needs to create its own blockchain. For instance, many popular cryptocurrencies are built on the Ethereum platform. These are known as ‘ERC-20 tokens’.

Examples of such tokens include the likes of Aion , EOS , and TRON . ‘Altcoins’ are essentially just ‘alternatives to Bitcoin’. They can differ in a number of ways.

For instance, they might have a different economic model, a different coin distribution method, a different mining protocol, or offer more privacy and scalability than Bitcoin. What is a Smart Contract? A smart contract is a self-executing contract made from computer code that is designed to enforce the fulfillment of an agreement. Ethereum is currently the most dominant smart contract platform. However, it has some severe limitations that need to be addressed – the most prominent flaw being its lack of scalability. As a result, Ethereum now has several up and coming competitors, such as Qtum and NEO , who are now working to take its place. Smart contracts currently have several limitations that are currently limiting their growth. For starters, they require a computer programmer to create them.

They are also encrypted to increase their security, which can make them difficult to read. Companies like SciDex aim to make smart contracts more readable and adaptive for the mainstream population.

Other companies, such as Etherparty , have created smart contract templates. Meaning that smart contracts can be created within minutes, and the process is simple and accessible to everyone. Bitcoin mining, by Flickr user Crypto360. c/o Creative Commons What is Crypto Mining? Crypto mining is the process by which transactions for various cryptocurrencies are verified and added to the blockchain. Anyone can mine cryptocurrencies, but being successful usually requires high upfront hardware costs.

There are several different mining protocols that cryptocurrencies can have. The main protocols are Proof of Work (PoW) and Proof of Stake (PoS). However, more and more alternative methods are beginning to pop up. Proof of Work (PoW) – users compete to be the first to find the solution to a mathematical problem. This measure was put in place to reduce the number of denial of service attacks and spam, as it requires the user to do some work. Bitcoin uses this protocol. Proof of Stake (PoS) – users mine or validate blocks and are rewarded according to how many coins they already hold.

The more cryptocurrency they hold, the more mining power they have. This is the mining protocol for cryptocurrencies such as Qtum. In the near future, Ethereum plans to move from Proof of Work to Proof of Stake in the near future. Proof of Burn (PoB) – users undergo a short-term loss in exchange for long-term gain by ‘burning’ a cryptocurrency. When a user burns more coins, they stand a greater chance of mining the next block. There are many reasons for this burning of coins. It encourages the long-term commitment of a project, it gets rid of unsold coins, and it pays for transaction fees.

Counterparty (XCP) is one of the most well-known cryptocurrencies using this protocol. Proof of Assignment (PoA) – this is a relatively new mining protocol. It sets itself apart from other protocols as it is able to run on Internet of Things (IoT) devices and mine cryptocurrency without any added hardware and without using a lot of the device’s power or memory.

IOTW uses the Proof of Assignment protocol. What is a Crypto Exchange? Crypto exchanges allow users to buy and sell cryptocurrencies and digital assets. There are two main types of exchanges.

The first type of exchange is known as a fiat exchange .

This allows users to directly exchange their US dollars, Euros, and other government-backed currencies into cryptocurrencies. The top fiat exchanges include the likes of Coinbase and Kraken . The second type of exchange is a crypto to crypto exchange. These exchanges don’t accept fiat currency, and instead, require users to trade their cryptocurrencies directly with one another.

Binance is one example of such an exchange. What is an ICO? An ICO is an ‘Initial Coin Offering’. It is a fundraising campaign where new projects can sell crypto tokens in exchange for Bitcoin or Ethereum.

Investing in an ICO can pay off big time.

For instance, the price of an Ethereum token during its ICO was approximately $0.311.

In January 2018 , the price of a single Ethereum token broke the $1,300 barrier. Buying even a single token during its ICO could have led to massive returns. However, while participating in ICOs can provide significant rewards, it is also extremely risky. For many ICOs, the idea never takes off, and the tokens are rendered redundant. You will need a Bitcoin fork to eat your Bitcoin. Not really, but it’s a nice thought.

Flickr user W uestenigel, c/o Creative Commons What is a Fork? There are multiple different types of fork, and they are triggered by different events. An accidental fork occurs if coin updates turn out to be incompatible and the developer is required to eliminate the bugs that are causing incompatibilities and figure out how to merge the blockchains. A hard fork occurs if developers want to make substantial changes to the programming of the coin that will result in an incompatibility between the older and newer version. If a hard fork occurs, all holders of the cryptocurrency are required to update all applications in order to continue using the cryptocurrency. The first hard fork for the splitting of Bitcoin (BTC) occurred in August 2017.

This resulted in the creation of Bitcoin Cash (BCH). For every BTC a person owned, they received 1 BCH. Ethereum has gone through a substantial number of both planned and unplanned hard forks. For instance, Ethereum Classic (ETC) was created as a result of a hard fork of Ethereum (ETH) following The DAO attack , where 3.6 million Ether (worth approximately $50 million USD) was taken from the accounts in The DAO and moved to another account without consent. What is a Wallet? A wallet is where users store their cryptocurrencies. There are several different types of wallets.

Each type has its own pros and cons. Online Wallet – these run on the cloud, and can be accessed from anywhere with an internet connection. They are extremely convenient but are also more vulnerable to attacks, which means they require additional layers of security. Mobile Wallet – an application on your phone. These even allow you to use crypto as a payment method in stores. However, if you lose your phone, you will also lose your crypto wallet.

However, if your computer gets hacked or breaks down, you could lose all of your assets. Hardware wallet – users store their private keys on a hardware device, such as a USB drive. This is one of the most expensive options, but it is also one of the safest. Paper wallet – this can be as simple as a printed sheet of paper that contains your generated public and private keys. You can withdraw and send cryptocurrencies by simply scanning the QR code in your paper wallet with your phone.

Which wallet you use depends on what you need it for, and how much you value security. Often, it is merely a case of weighing up security with usability and choosing accordingly. bitcoin-101-with-daniel-altman.