Introduction The Nodes in a blockchain can be considered to be the network stakeholder.The devices that hold these nodes are mainly required for keeping track of the distributed ledger and solving the purpose of communication hubs for various tasks in the network.The nodes in the blockchain are mostly employed to confirm the legality of a…

The Nodes in a blockchain can be considered to be the network stakeholder.The devices that hold these nodes are mainly required for keeping track of the distributed ledger and solving the purpose of communication hubs for various tasks in the network.The nodes in the blockchain are mostly employed to confirm the legality of a transaction and how valid each subsequent transactions in a block are.These are extremely important in blockchain as they allocate distinctive identifiers to individual networks that help in differentiating and distinguishing a node from the other present nodes in a blockchain network.Other than legitimizing and storing data, the nodes constantly synchronize these data with the blockchain by updating the transaction history.

Blockchain nodes are also beneficial in managing the transactions and propagating the growth of net worth, which can be done by sharing new data with the other present nodes.It is also responsible for putting in place an algorithm that assists the networks in always staying updated.Nodes are considered essential because they can handle transactions, process the data, and communicate this data to other nodes.

They can be considered to be shared and immutable ledgers that are cryptographically linked to the next one.

What is hash mining? A hash is considered to be the function that is required to meet the encrypted demands which are needed for bringing solutions to blockchain computations.These hashes are flexible and are not fixed in their length, thus making it almost impossible to guess their size if someone is trying to hack into the blockchain.If you are looking to solve a hash, then you have to start with the data that is available to you in the block header and subsequently solve a numerical problem.These block headers are an umbrella term for a version number, a time stamp, the previous block’s hash, the Merkle root’s hash, the nonce, and the target hash.

Hash Mining in cryptocurrency is considered to be the mathematical value in which a hashed block header must be less or equal for an upcoming block to be rewarded to a miner.

The block headers are responsible for identifying the individual blocks in a blockchain.This mining process can be understood as accumulating cryptocurrency as a form of reward for work that the user completes.The target hashes are used in some proof of work systems that set the current mining difficulty.When a crypto currency blockchain uses more than one system for mining, it eliminates the need for a target hash.

Following are the types of blockchain nodes,

Light Nodes- These nodes do not take responsibility and store data from the entire blockchain.

The lightweight nodes are responsible for keeping track of their own transactions.

Archival Full Nodes- Full nodes give support to the network and validate each block by storing the entire blockchain.These nodes take account of the ability of transaction verification, network status communication and transaction validation while also handling the consensus.Pruned Full Nodes- These nodes provide space for storage by saving the option for users by deducting old blockchain blocks.

The oldest transactions can be erased by downloading the complete blockchain from the very beginning in order to help this node function.

Mining nodes- These nodes can be used for developing new blockchains that will help crypto mining.Authority nodes- These nodes are being utilized for decentralized network cases.The development team is responsible for deciding the number of authority nodes required.Masternodes- They function to authenticate and store transactions but do not add blocks to the blockchain.The rewards that are earned by running a master node can be shared via the users with others.

The DASH network uses master nodes.Lightning Nodes- this is different from the other listed types of nodes.

These have the potential to reduce the load of the network.They provide a helping hand to the users who do not use blockchain and allow them with chain transactions.This blockchain node is popularly used due to its quick and cheap transaction availability.Why should you consider running a node? The reasons why you should consider running a node are:

Anyone and everyone are liable to set up a node by simply downloading the particular blockchain’s software into their personal device at any time and from anywhere around the world.

The blockchain nodes do not depend on any validation being provided to them from the system’s apps, as a universal consensus mechanism does their checking and verification.Running a node gives users access to interact with other blockchain networks more privately and securely The user gains more ownership and does not have to rely on any other organizer or running party.Not only is the entire process of running on a node extremely simple it also helps in strengthening the hardiness of the network that it is connected to.Even though there is an absence of physical or monetary rewards, running a complete blockchain node will result in intangible benefits.

These benefits include the security of the transactions that are being conducted by the user and providing all the latest and important information regarding the blockchain.If you are an investor, then running a node will help you in monitoring the health of the blockchain and will also ensure valid and accurate trading transactions.

Basics of setting up a node

The major steps and requirements of setting up a node are the following,

Laptop or a personal desktop with a recent version of Linux Mac or windows A least 7GB pruning setup and about 340 GB of free disc space for complete node setup.2GB memory RAM.Broadband internet connection with a speed of 50 KB or above Minimum 6 hours a day dedicated to the running of the node.

Follow the instructions one by one and complete the process of installation.Configure the network- establish both the inbound and outbound connections to the other present nodes in the blockchain network.

Verify your connections and test the connections at the site when the node has been completely synced with the Bitcoin blockchain.Enhance the privacy of your blockchain node- if you are planning on running a complete Bitcoin node, it increases the risk of being targeted by hackers who seek to take down the entire Bitcoin network.Even though it is a difficult task, you can run your Bitcoin by an anonymity-focused network that helps you avoid such scenarios by enhancing your privacy to the next level.This will help you in not letting others discover you in the network.

FAQs What are nodes in a blockchain? Nodes in the context of blockchain or cryptocurrency can be considered the backbone of blockchain infrastructure as they are the main unit of storing, verifying, saving, broadcasting, and distributing data to other nodes.It is one of the numerous other similar devices that function the blockchain protocol software and is considered the storehouse of all the history of transactions.It is connected to each other via a decentralized peer-to-peer network.They also help in enforcing the consensus of rules of the blockchain.A node is one of the most important parts of cryptocurrency required to facilitate the most popular tokens such as Bitcoin or Dogecoin functions.

What is a node in bitcoin? A bitcoin node is a computer that is connected to other computers to share information and follow the rules.Nodes play a significant role in the operations and functioning of the cryptocurrency network.

Nodes can be of two types in a bitcoin network.They are full nodes and light nodes.Though people often confuse a full node and a node as the same, they have considerable differences.

A full node validates transactions and blocks within a bitcoin network, thereby supporting it.

As the name suggests, light nodes are lightweight and require less download and storage capacity.

Unlike full nodes, they do not store the entire blockchain.These nodes download blockchain headers only.The main task of lightweight nodes is to verify the transactions carried out in a bitcoin framework using simplified payment verification.There are further divisions of full nodes into pruned nodes and archival nodes.Pruned nodes download blocks in a chain from the beginning.

These nodes delete the older blocks once their storage capacity is full.On the other hand, archival nodes take up larger hard drive space as they host the entire blockchain.

Is a wallet a node? A full node is used to verify transactions on the blockchain and includes a wallet.

Are crypto wallet nodes? Crypto wallets aren’t necessarily the network’s nodes, as they don’t automatically assist in validating transactions on the blockchain.However, lightning nodes, which validate off-chain transactions, can serve as nodes.Furthermore, full nodes can include a wallet function for storing crypto..

Has blockchain found a use beyond crypto trading?

Tue Aug 16 , 2022
A man (2-R) introduces play-to-earn blockchain games to visitors in a pop-up shop promoting blockchain in Hong Kong, China, 17 May 2022.Blockchain games are different from traditional games in that they offer economic incentives, NFT, (Non-Fungable Tokens), and rewards exchangeable for crypto-currency by progressing through the different games levels.EPA-EFE/JEROME FAVRE/FILE PARIS - The bitcoin boom… 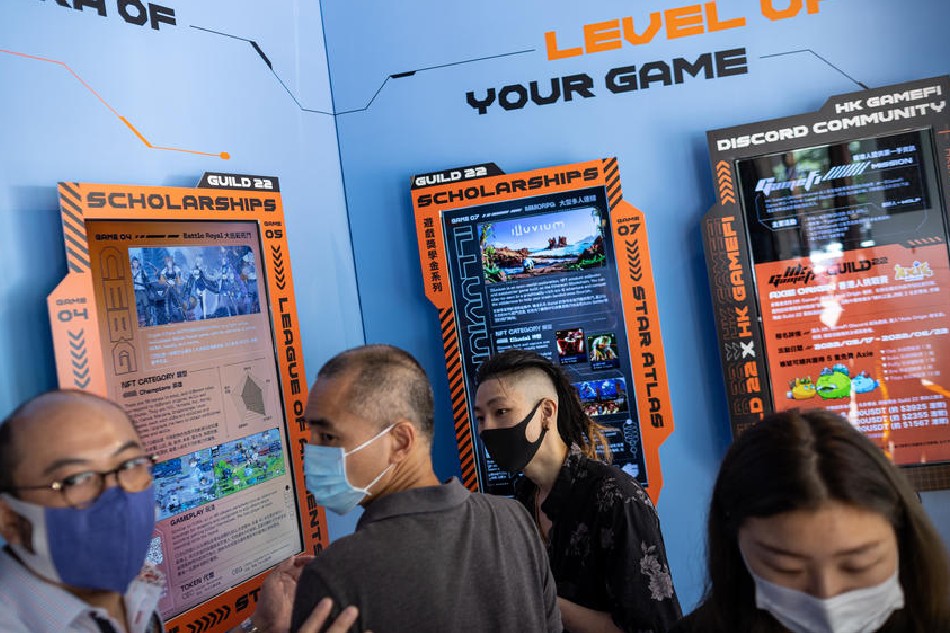