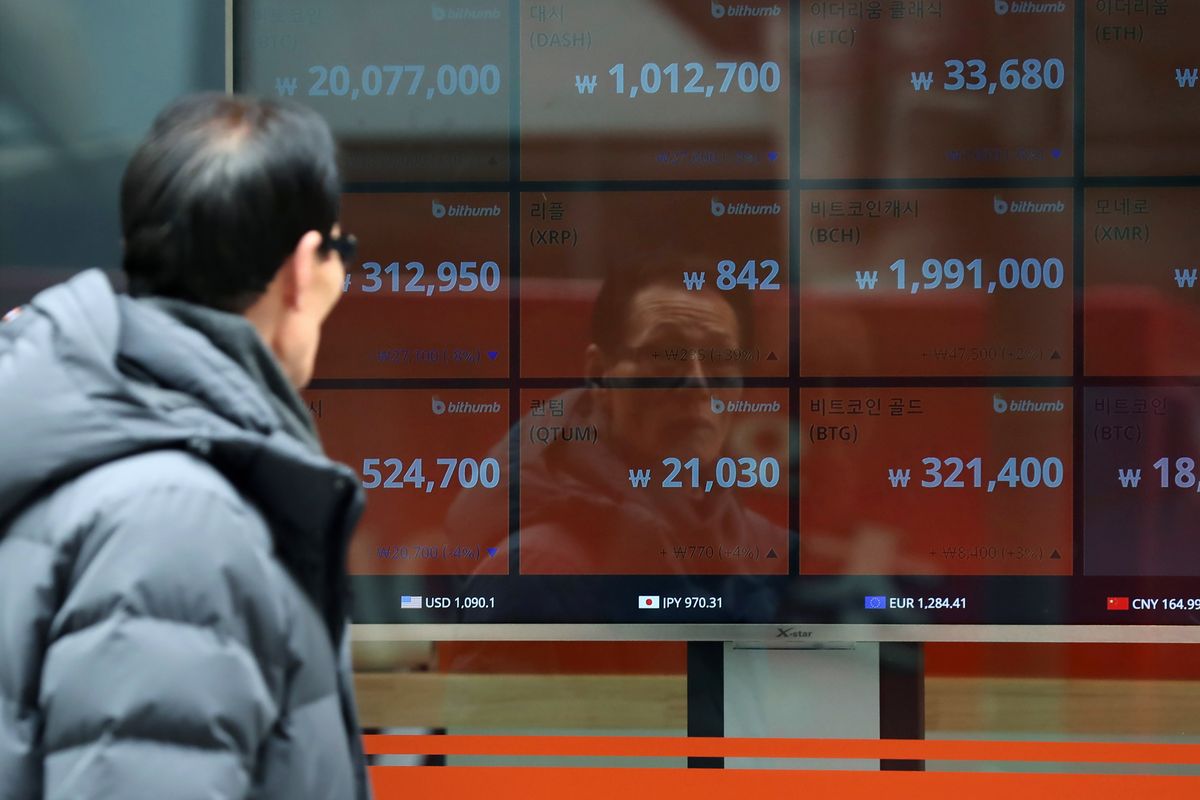 Bitcoin resumed its slide Thursday, dipping below $14,000 as the cryptocurrency’s dizzying drop from a record set 10 days ago intensified.
The latest blow to the world’s biggest cryptocurrency came from South Korea, where the government said it was eyeing options for stamping out a frenzy of speculation , including a potential shutdown of at least some exchanges.
Bitcoin fell as much as 11 percent to as low as $13,500 as of 2:02 p.m. in New York, erasing modest gains after the South Korean release, composite Bloomberg pricing shows. It’s now down 30 percent from the record $19,511 it reached on Dec.

18.
For more on bitcoin, see the following:
What the World’s Central Banks Are Saying About Cryptocurrencies
Goldman Is Said to Be Building a Cryptocurrency Trading Desk
Novogratz Halts Hedge Fund, Says Bitcoin May Drop to $8,000
Bitcoin’s plunge comes after futures contracts started trading on CME Group’s exchange, giving investors new ways to bet on the digital coin’s price moves. The news from South Korea unnerved traders because the country has been ground zero for a global surge in interest in bitcoin as its rally this year reached 1,600 percent, prompting the nation’s prime minister to worry over the impact on Korean youth .
While there’s no indication Asia’s No. 4 economy will shutter exchanges that have accounted by some measures for more than a fifth of global trading, the news is a warning as regulators express concerns about private digital currencies. South Korea will require real-name cryptocurrency transactions and impose a ban on the offering of virtual accounts by banks to crypto-exchanges, according to a statement from the Office for Government Policy Coordination.

Bitcoin was trading at about a 30 percent premium over prevailing international rates on Thursday in Seoul, according to price data from local exchanges, a continuing sign of the country’s obsession, and the difficulty in arbitraging between markets.
“Cryptocurrency speculation has been irrationally overheated in Korea,” the government said in the statement, which comes little more than a week after the bankruptcy filing of one South Korean exchange. “The government can’t leave the abnormal situation of speculation any longer.”
How do you decipher the bitcoin phenomenon? Investors, central bank officials and economists share their views.

Source: Bloomberg) Singapore’s monetary authority warned last week that digital currency buyers should be aware they could lose all their money, joining counterparts who’ve warned about speculative mania surrounding bitcoin, which has surged more than 1,300 percent this year even after today’s selloff.
“Regulators are getting so concerned that this is primarily and predominantly a retail phenomenon,” said Stephen Innes, head of trading for Asia Pacific at Oanda. “Regulators not only in Asia but globally are going to start addressing this fact because I don’t think they’ve actually come to terms with what the absolute downside of a complete drop in crypto means for the economy.”
For a menu of cryptocurrencies on the Bloomberg: VCCY
For bitcoin prices: XBT Curncy
For more on cryptocurrencies, check out the Decrypted podcast:
— With assistance by Kailey Leinz.