Pi Network (PI) has caught the attention of cryptocurrency investors before the coin becomes available for trading.Some users view it as a way to get involved in a cryptocurrency from the ground up and profit in the future, in the same way that some of early bitcoin (BTC) adopters have racked up gains from mining…

Pi Network (PI) has caught the attention of cryptocurrency investors before the coin becomes available for trading.Some users view it as a way to get involved in a cryptocurrency from the ground up and profit in the future, in the same way that some of early bitcoin (BTC) adopters have racked up gains from mining and holding the coin.However, others have likened Pi crypto to a multi-level marketing (MLM) scam that holds no value.But what is Pi Network and how does it work? Have you heard of the new cryptocurrency and are wondering about the worth of Pi coin as a potential investment? This article provides an overview of what the Pi Network aims to achieve and how the Pi coin price prediction is taking shape.

What is Pi Network? Pi Network is a digital currency project that aims to keep cryptocurrency mining accessible as the centralisation of first generation currencies like bitcoin has put them beyond the reach of everyday users.The Pi Network, developed by a team of Stanford graduates, enables users to mine coins using its mobile phone app, validating transactions on a distributed record.

Unlike nodes on networks such as Bitcoin that use proof-of-work ( PoW ) protocols, Pi nodes use an algorithm based on the Stellar Consensus Protocol (SCP).Pi Nodes validate transactions on a distributed ledger and reach a consensus on the order of new transactions that the ledger records.Under SCP, PI nodes form security circles, or groups, of three to five trusted people known to each of the networks’ users.Security circles build a global trust network that prevents fraudulent transactions, as transactions can only be validated on the shared ledger if the trusted nodes approve them.With branding based on the number π, Phase 1 of the project launched in 2019 on Pi Day, 14 March, with a free Pi mining app.By June 2019, the network had more than 100,000 active users.

A year later, when Phase 2 launched, there were more than 3.5 million users.— Pi Network (@PiCoreTeam) — Pi Network (@PiCoreTeam) [#PiNetwork] recently crossed 3.5+ Million Engaged Pioneers.We have a lot to celebrate as a community as we approach Pi Day 2020 and our next phase of development! Keep an eye out for updates over the next couple of weeks.Retweet and mention us for responses from the [@PiCoreTeam] ! [pic.twitter.com/FlgBhHIJaz] [February 26, 2020] The app started running ads in May 2020 to provide a source of financing for the project.

As of 24 September 2021, the user base had climbed to 25 million, up from 14 million in March 2021.Pi coin, or PI, is the cryptocurrency that runs on the Pi network, and as with other cryptos such as bitcoin, it was designed to undergo regular “halving” to protect its scarcity.Halving is when the number of coins a miner receives for processing new transactions is reduced by half.It usually occurs when a certain milestone is reached.

Read more about the full plans in Pi app.[pic.twitter.com/GXcnLW0oBm] [December 9, 2020] During the project’s current second phase, users can volunteer to test the Pi Node desktop software on their computer.The Pi Wallet and Pi Browser were released for testing on 1 April 2021.And on 28 June, a Developer Portal, software development kit (SDK) and other resources were released.When will Phase 3 launch? According to the project’s developers, the start of the third phase has not been set and depends on progress made in the second phase.

According to the Pi roadmap , they plan to introduce a Know Your Customer (KYC) solution, expanded developer resources, more apps and community content, along with the mainnet launch.From 28 June until 30 September, Pi held its first hackathon , #BuildPi2gether, to encourage developers to contribute ecosystem apps to improve Pi’s functionality and business apps to serve a consumer or commerce product.

Pi awarded a total of $100,000 and 100,000 PI to the top projects in each category.PI remains in pre-release mode If you are wondering how to buy the Pi coin for your portfolio, you can’t.Users who have mined the Pi cryptocurrency will only be able to withdraw or exchange their coins during the project’s third phase when it moves to a decentralised blockchain.

PI cannot be transferred during the testing phase in order to prevent fake accounts from accumulating coins, according to the project’s website.Wallet balances are expected to be honoured when PI shifts from the testnet to a mainnet, when the blockchain protocol comes out of development and is fully deployed.As a result, Pi coin is not yet available to trade on any cryptocurrency exchange or trading platform.The price of PI has yet to be established.Once Phase 3 launches, holders will be able to take full control of their private and public wallet keys, and use the coin to buy products and services on Pi’s peer-to-peer marketplace, or exchange it for fiat currency.Without the keys, users cannot transfer or spend the currency they hold.The PI mining app acts as a cryptocurrency wallet, linked to a user’s mobile phone number or Facebook account.

As with other public blockchains, the Pi blockchain will allow external wallets to hold Pi coins and submit transactions directly to the blockchain.However, unlike other blockchains, its developers have not yet released its source code.Early adopters are accumulating Pi crypto in anticipation that the price will rise sharply after Phase 3 goes live.Although the coin’s mining rate has been reduced by halving, users can increase their mining rate by connecting with other active miners.New users can only join the Pi Network if they have a referral code from another user.The project’s developers claim that security on the Pi Network is enhanced by personal networks, encouraging users to bring in friends and family – which is prompting scepticism that it could be a multi-level marketing or pyramid scheme.

However, it is worth noting that users can only earn coins from their own direct networks and not from their connections’ networks, as with an MLM scheme.Some cryptocurrency observers have already started to make their Pi Network value prediction.Let’s take a look at what the Pi price could likely be when it does start trading.Pi Network: Pi coin price prediction for 2021–2025 As with other digital coins at launch, the PI cryptocurrency value is likely to start at a relatively low level against the US dollar and rise as usage grows.What do some of the price forecasters suggest? Both cryptocurrency data provider CoinMarketCap and algorithm-based forecasting site Wallet Investor list a current value of $0.007077 for Pi coin.In March this year, Wallet Investor had a Pi cryptocurrency prediction of $0.0132, with a downside at $0.00743.

However, according to the website, it is no longer updating its forecast.

Over the longer-term, it predicted the PI price could average $0.0319 by 2028, suggesting that the Pi coin value in 2030 would be higher.However, the website no longer updates the forecast.Depending on the number of cryptocurrency users and exchanges that adopt PI, the bull case could see the coin’s price launch at $0.16 and reach $1 a year later, according to crypto exchange Changelly .Over the longer-term, the price could rise to $5 in five years’ time.

It’s important to keep in mind that cryptocurrency markets remain extremely volatile, making it difficult to accurately predict what a coin’s price will be in a few hours, and even harder to give long-term estimates.As such, analysts can and do get their predictions wrong.We recommend that you always do your own research, and consider the latest market trends, news, technical and fundamental analysis, and expert opinion before making any investment decision.And never invest more than you can afford to lose.

Follow Capital.com to stay on top of the updated PI/USD price forecast once any further data becomes available.FAQs The PI cryptocurrency is planned to launch during the Pi Network’s third development phase.A date has not been set.Timing will depend on the progress of the testing phase and the subsequent listing on cryptocurrency exchanges.The developers have yet to provide detail on the number of Pi coins that will be in circulation when the project goes live, or what the maximum supply will be.The future of Pi coin will depend on the process of its transition from the testnet to mainnet operations and the adoption of the apps in the Pi Network ecosystem.

Cryptocurrencies are highly volatile assets, and there is uncertainty surrounding the Pi Network in particular as it has yet to launch.The project’s developers claim that the network is secure, while critics claim that it could be a pyramid scheme.

At this time, investors are unable to trade Pi coins.If you expect the project to successfully launch an accessible cryptocurrency that does not price out everyday users, you could get involved in mining the coin.Alternatively, you could wait to buy it on an online exchange.

Remember to always do your own research.

And never invest money you cannot afford to lose.

The direction of the Pi price will depend on its popularity among cryptocurrency investors.There is potential for the price to rise after it launches if the broader cryptocurrency market continues to rally.And new projects tend to attract investor interest.However, with the coin yet to launch, it’s impossible to accurately predict its future.Given the number of users who have signed up to mine the coin, forecasters like Changelly predict that the PI price could rise to $1 after it starts trading on cryptocurrency exchanges.But the coin has not been launched.It’s impossible to predict its future with any degree of accuracy.

Whether you believe predictions is a decision only you can make.As always, you should do your own research.And never invest more than you can afford to lose.Read more: Ravencoin (RVN) price prediction: stalling while others are rallying .

Ravencoin (RVN) price prediction: stalling while others are rallying

Sat Oct 23 , 2021
Ravencoin has lagged behind other cryptocurrencies since the beginning of October 2021.The token has gained 12%, but that’s against a 30% growth in the market capitalisation of the entire crypto market, as reflected in data from CoinMarketCap .The tailwinds that once lifted RVN close to the $0.30 level have faded, but that doesn’t necessarily mean… 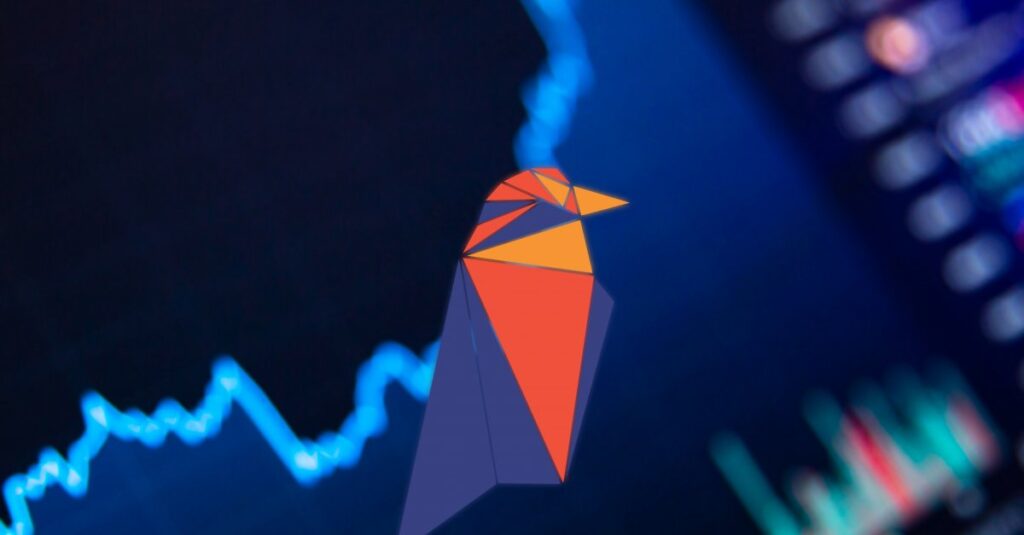